Outlay for new fiscal year to be presented in NA today
June 29, 2020 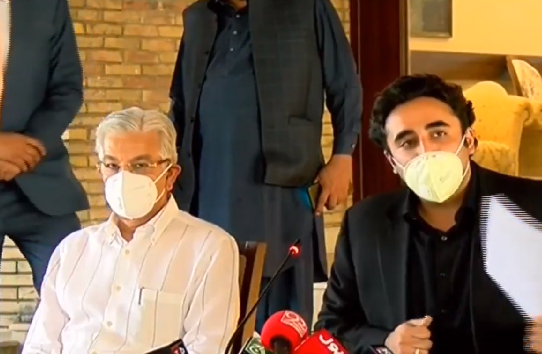 The opposition parties on Sunday “unanimously and unequivocally” rejected the federal budget for the next fiscal year 2020-21 ahead of Monday’s (today) crucial voting in the National Assembly for its passage.

Speaking alongside PML-N’s Khawaja Asif, JI’s Mian Aslam, JUI-F’s Akram Khan Durrani and others during a press conference at Sindh House in Islamabad, PPP Chairman Bilawal Bhutto-Zardari announced that the “united opposition” had rejected the budget and had issued a joint statement in this regard.

“We, the members of the Joint Opposition in Pakistan, have deliberated over the budget at length and hereby reject it unanimously and unequivocally,” read the joint statement.

The PPP chairman noted that the budget had united the nation against the incumbent government and added that Prime Minister Imran Khan was endangering the “health and economy” of the country.

Representing the PML-N, Khawaja Asif said that the premier had become a “national liability”.

The opposition also hinted at calling an All Parties Conference as soon as PML-N President Shehbaz Sharif recovered from Covid-19.

“The IK government has failed miserably in providing relief to Pakistanis when they need it most. The budget fails to provide for protecting the lives, future and livelihoods of the Pakistani people,” it added.

During the news conference, Bilawal, Asif, Aslam and other opposition leaders observed that unprecedented challenges merit an unprecedented response and the “budget is nowhere close to that” and “devoid of any good news for the people of Pakistan.”

In an attempt to unravel “deception in the budget”, the opposition leaders maintained that “fears of the people have been proven correct even before the ‘no new tax’ budget has been voted on. The massive and oppressive increase in petrol prices has laid bare the fact that a series of real mini-budgets will start appearing almost every month.”

They questioned “how many more tax bombs is the PTI government going to kill us with.”

While highlighting the grave fiscal crisis, the opposition leaders noted that “debt increased in the short period of two years by this incompetent government is more than the debt increased by either PPP or PML-N in their five-year tenure.”

Stressing that the incumbent government had decreased the GDP growth from 5.8% to negative 0.4% in the last two years, they pointed out that the collection of tax revenues was less than the previous year, while the currency had devalued by 40% and exports shrank, unemployment doubled and poverty increased.

With interest rates and inflation at extortionate levels, the statement said, the government also expected to raise 27% more taxes or an additional trillion rupees.

“This can only happen with IK government presenting mini-budgets. We already know that this is what it intends to do. The current budget therefore is a ruse,” the statement read.

“The IK government has played the dance of its deadly and divisive politics on this budget too … budget shockingly ignores that the world is going through such an unprecedented emergency of epic proportions … government has completely ignored the Covid-19 pandemic in this budget,” it maintained.

The opposition also alleged that the government was “slowly killing off CPEC by leaving little or no money in the budget for its programme”.

It said that the budget lacked any roadmap for health or economic recovery.

By the government’s own data, the joint statement said, until last year there were 1,279 hospitals in the country.

“No new hospitals were added in the years 2018-2019. There is no special package for Balochistan for the setting up of isolation and quarantine centres and for the electrification of its villages,” it added.

Moreover, the opposition said that the “National Finance Commission is completely illegal in its notification.”

The money allocated to the provinces this year is 20% or Rs500 billion less than what was stipulated last year, the opposition leaders said, adding that a health package should have been included in the budget for all the provinces.

Referring to the United Nations’ Food and Agriculture Organisation warnings, they said, Pakistan’s GDP could be adversely affected by the locust attacks to the tune of Rs600billion, adding “the federal government has not just ignored attempts to fight it, but has only allocated Rs10 billion for it.”

With 140,000 acres of crops already damaged by this locust tsunami, the statement read, “the budget has criminally neglected calls for pesticide spray planes and other equipment. As it stands, three million square kilometres of farmland is already affected badly in Pakistan, and further agricultural damage is expected with such inaction.”

The opposition maintained that the incumbent government was not even implementing its own Locust National Action Plan.

It said the government did not increase the salaries and pensions despite double digit inflation.

The opposition leaders stated that tor the first time in the country’s history the minimum wage was not adjusted thus putting additional burden on the lowest paid workers.

They were of the view that the government had been at pains to portray its “stellar” performance prior to the Covid-19 pandemic, whereas its own numbers painted a different picture.

“This country needs to be saved from this incompetent, anti-poor, vindictive, and fascist IK government before it brings the country down under the weight of its own blunders,” the joint statement said.

The opposition also expressed concerns over the depleting water reserves in the country.