When will I see you again? Sport steps out of virus shadow 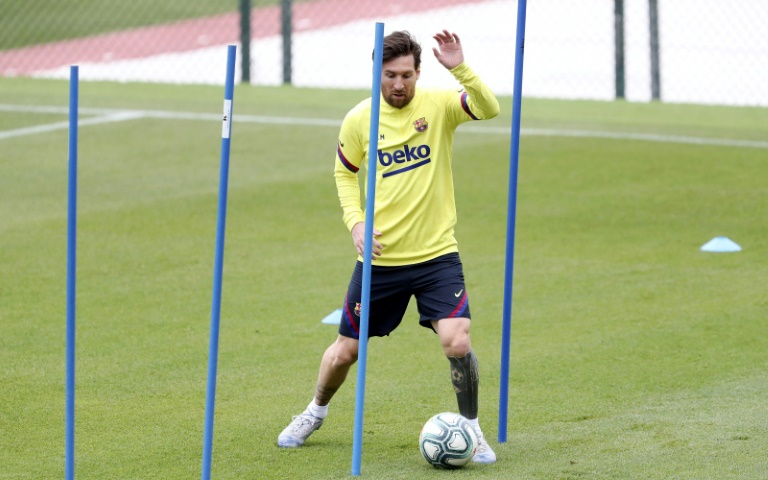 Sport's big ticket events, the 2020 Tokyo Olympics, European football championships, Wimbledon and the British Open golf tournament have all been cancelled this year because of the coronavirus.

However, as the world slowly emerges from the pandemic, sport is making a comeback with the English Premier League and Italy's Serie A both revealing return dates on Thursday.


AFP Sport looks at what's ahead:

-- The English Premier League will restart on June 17, provided that all safety requirements are in place.

Aston Villa v Sheffield United and Manchester City v Arsenal will take place on that date, followed by a full match round beginning on June 19.

Due to the coronavirus all matches will take place behind closed doors.

Liverpool are just two wins away from a first league title in 30 years.

-- Italy's Serie A can resume on June 20 after a three-month absence in a country hit hard by the coronavirus pandemic, sports Minister Vincenzo Spadafora said.

No top-flight matches have been played since Sassuolo beat Brescia 3-0 on March 9, before the championship was suspended by a pandemic which has killed over 33,000 people in Italy.

-- The German Bundesliga became the first major European league to resume on May 16 under strict conditions. Matches are behind closed doors with players elbow-bumping to celebrate goals. Some grounds have allowed cardboard cutouts of fans to fill up empty spaces. The league wanted to complete the last nine rounds of matches before June 30 to secure around 300 million euros ($325 million) in television money.

PHOTO: AFP
-- Spanish La Liga president Javier Tebas said he hopes the season will start again on June 11 with the Seville derby, "one game for all of Spain".

"It is possible that on Thursday, June 11, we could have the first Liga game," Tebas told Movistar Plus television.

All matches will be behind closed doors. Barcelona sit top of the table, two points ahead of Real Madrid.

-- In France, the season has been declared over and Paris Saint-Germain were awarded the Ligue 1 title.

-- South Korea had the honour of being the first elite league back in action on May 8 but there were no crowds or wild goal celebrations -- even talking was discouraged.

-- There will be no domestic cricket in England until August 1 at the earliest.

-- As far as international cricket is concerned, the English authorities remain confident the Test series with the West Indies, with matches provisionally scheduled to start on July 8, 16 and 24 at Hampshire's Ageas Bowl and Lancashire's Old Trafford, will go ahead, behind closed doors at these "bio-secure" venues.

PHOTO: AFP
Australia and Pakistan are still due to tour later in the summer.

-- The money-spinning IPL, which should have started on March 29, was postponed but media reports said the BCCI may aim for a tournament in September-October, ahead of the T20 World Cup in Australia.


As Australia's borders are currently closed to non-residents as a measure against coronavirus, there are doubts the tournament can go ahead as scheduled.

-- The ATP said it will not resume tournament play until the first week of August in Washington.

The WTA is still scheduling events in Palermo from July 20-26 and in Karlsruhe on July 28-August 2, for now at least.

PHOTO: AFP
-- The French Open has already been moved to Sept 20-Oct 4 although there are suggestions that it may be put back by a further week.

Organisers say it could be played behind closed doors.


-- The United States Tennis Association will decide in mid-June on the US Open in New York.

-- Formula One plans to open its season in Austria with back-to-back races on July 5 and 12.

Silverstone's hopes of also staging back-to-back races after Austria are in the balance after the British government insisted that all arrivals in the country undergo a two-week quarantine period.


-- NASCAR returned behind closed doors earlier in May at Darlington Raceway, South Carolina.

-- The NBA, whose players are conducting individual workouts at team facilities where allowed, exploring a plan to resume the season in late July at Disney World in Orlando, Florida, although final details have yet to be determined.

-- Major League Baseball wants an 82-game schedule to open in July after three weeks of pre-season training, with games to be played at home stadiums with no spectators. However, players are disappointed that pay cuts have been suggested by team owners.

-- The National Hockey League will abandon the rest of the regular season and proceed directly to a 24-team playoff staged in two hub cities. Ten cities are in the running for the two hub centres, including seven from the US: Chicago, Columbus, Dallas, Los Angeles, Las Vegas, Minneapolis, Pittsburgh. The three Canadian cities are Toronto, Vancouver and Edmonton.

PHOTO: AFP
-- After the cancellation of the British Open, the remaining majors are the PGA Championship from August 6-9 in San Francisco and the rescheduled US Open from Sept 17-20 at Winged Foot, New York, with the Masters at Augusta, usually played in April, scheduled for November 12-15.

-- The Ryder Cup, at Whistling Straits, Wisconsin, from September 25-27, could take place without fans.


-- The USPGA hopes its tournament season can resume with the Charles Schwab Challenge from June 11 in Fort Worth, Texas.

-- The LPGA Tour is due to reopen on July 23 at the Marathon Classic at Sylvania, Ohio.

-- Golf's European Tour will be back on July 22 with a run of six tournaments over six weeks in the UK, starting with the British Masters.

-- The Tour de France has been rescheduled for a August 29 start from its original June 27 date.

-- The Giro d'Italia will take place from October 3-25 with a six-day overlap with the Vuelta a Espana and will be raced at the same time as three 'Monument' classics.

-- The Diamond League, which was to have started in Doha on April 17, is now scheduled to open in Monaco on August 14.

-- With the exception of a June 11 meeting in Oslo that will feature modified events in line with social distancing rules, the rejigged Diamond League calendar will showcase 12 meetings, culminating in China on October 17 at a venue yet to be arranged.

-- The first English classics, the 1000 and 2000 Guineas are to be run at Newmarket on the first weekend of June.

-- Flat racing's showpiece meeting Royal Ascot it is hoped will follow shortly afterwards on June 16. However, it will do so without racegoers, including its most notable attendee Queen Elizabeth II who will miss it for the first time since 1952.

-- The Derby and Oaks will be behind closed doors at Epsom Downs on July 4 instead of June.

-- In the United States, the Triple Crown will now start on June 20 with the Belmont Stakes, followed by the rescheduled Kentucky Derby on September 5 and the Preakness Stakes on October 3.

-- The NRL season in Australia restarted on Thursday.

-- In union, summer internationals have been cancelled as has the French Top 14.