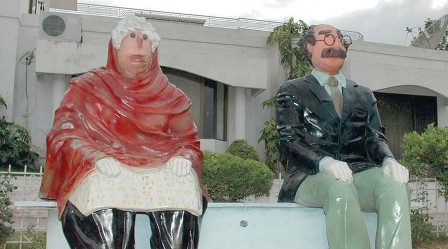 ISLAMABAD: The pioneer of puppets shows on television in Pakistan, Farooq Qaiser, has been demanding recognition for his much acclaimed character Uncle Sargam, for quite some time now.

Qaiser claims that he wrote several letters to the government during Nawaz Sharif and Benazir’s government, but got no response. Later, it was Governor of Punjab Khalid Maqbool who sent instructions to acting chairman Capital Development Authority Kamran Qureshi to build statues of the characters.

“The idea was to relive the characters by giving a huge display to their statues at some public park, which did not happen,” said Farooq Qaiser.

The statues were made some four years ago and were seated on a bench near Qaiser’s residence.

“No measure has been taken for their maintenance. I have to check on my own if their paint is intact or whether somebody has damaged them.”

He added that Uncle Sargam got recognition in places such as India and America but it was sad to see how there was no heritage preservation measures taken ‘in our own country’.