Enters a phase where the option of talkin­g to the Indian govt is closed for the forese­eable future­
By Faisal Ali Raja
Published: May 23, 2020
Tweet Email 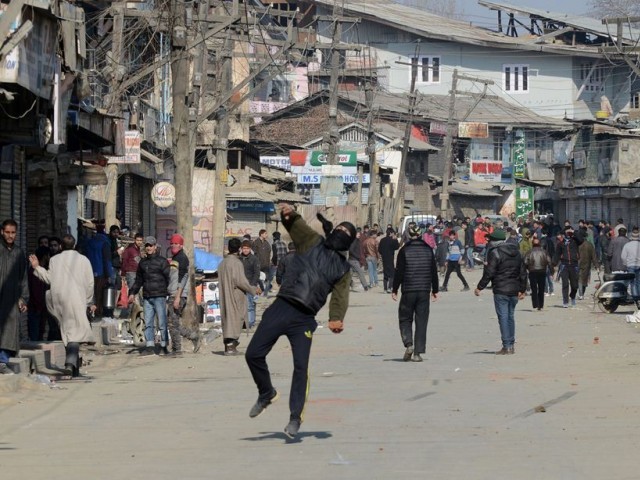 Kashmiri supporters of the Jammu and Kashmir Liberation Front (JKLF) throw stones towards Indian police during a protest in Srinagar on January 16, 2015. JKLF Chairman Mohammad Yasin Malik and supporters were demonstrating against a reported decision by the Indian government to give permanent resident status to refugees of Bangladesh, formerly West Pakistan, who are settled in various areas of the winter capital of restive Kashmir. PHOTO: AFP

Insurgencies have been generally portrayed as political struggles through violent means often tagged with popular support. We are perhaps witnessing an interesting revival of the Kashmir insurgency which is locally motivated, owned and controlled. Since Burhan Wani’s killing in 2016, the valley seems to have erupted into activity for another armed struggle. Though one can trace the contours of new insurgency way back to 2012 when the lowest level of killings was recorded in IOK. Three important features differentiate the new version of Kashmir insurgency from the previous uprisings.

First, the educated youth from troubled districts especially in southern Kashmir are joining various organisations to carry on the fight against Indian forces. These young men know the geography and have the confidence of the denizens of the area. The local people shelter them, provide them food, and inform them about the movement of Indian troops. Even they have their sympathisers among the local police force and other government departments as well.

Second, these fighters have been using social media and other latest communication techniques frequently and with adaptive alacrity to redefine their struggle in a new paradigm. This has enhanced their recruitment base and extended their human resource outreach.

Third, they have utilised the brutal practices of Indian government in their favour to secure the support of local population, garner moral and ethical assistance from regional countries and reshape international perception about the Kashmiri struggle. Recently, the Indian government has been consistently criticised on account of ill-treatment of its minorities.

The Indian establishment’s age-old mantra that the insurgency is backed by Pakistan and there are terror launching pads along the LoC no longer holds true in the current situation. Though, India has been boasting of conducting a number of surgical strikes across the LoC, no concrete evidence has been shared with the international or local media. This also suggests that these are predominantly psychological tactics rather than precision operations against terror training camps. Interestingly, the investigation into the Pulwama incident in 2019, which led to severe Indo-Pak border skirmishes, revealed that the suicide attacker was a youth from the same locality. Moreover, the situation has been tense since the valley was locked down in August 2019.

The recent encounter of Riyaz Naikoo, the Hizbul Mujahideen leader, in southern Kashmir indicates how the local youth are redefining the insurgency. Naikoo took the reins of the organisation in 2017 and was actively pursuing its objectives in cyberspace. As a mathematics teacher, Naikoo taught in a local educational facility before getting attracted to the Kashmiri insurgency in 2012.

The new insurgency has generated a romanticised version of affiliates of Hizbul Mujahideen and other such organisations in IOK. A Deputy Superintendent of Police of Jammu and Kashmir police department, Davinder Singh, was detained in January 2020 for aiding and abetting the Kashmiri fighters. Though there may be numerous reasons of his arrest including his role as a double agent, it does indicate the trends of new struggle.

The Kashmir insurgency has probably entered a phase where the option of talking to the Indian government is closed for the foreseeable future. The political voices, though always circumspect and careful, have been mutated as leading Muslim politicians are under house arrest. The Indian government has decided to use all brutal measures to suppress the country’s Muslims. The policy aims to put Muslims under a constant fear, panic and agitation. But such a terror is reigniting passions in the Kashmiri youth and urging them to carry on their fight against Indian forces to liberate their land.