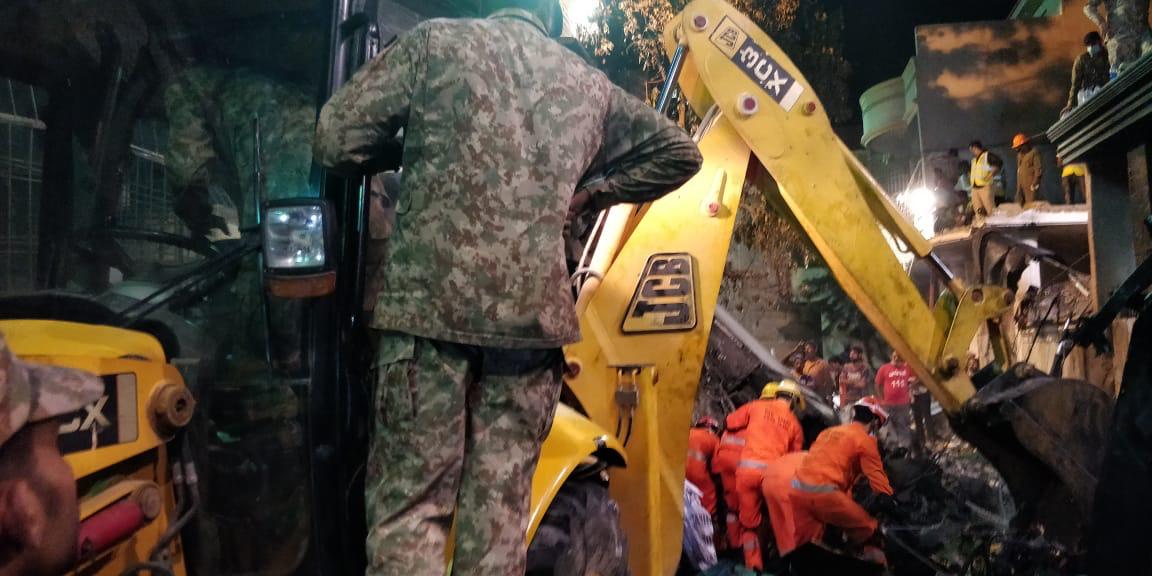 A Pakistan International Airlines (PIA) aircraft, flying from Lahore to Karachi, crashed near the port city’s airport in the densely populated area of Model Colony on Friday.

PIA flight PK8303 had 99 passengers and eight crew members on board during the time of the incident. The crash caused significant damage in the residential area and reportedly destroyed four houses.

TRIGGER WARNING: CCTV shows last moments of tragic PIA A320 Airbus flight that crashed in a residential area near #Karachi airport on Friday afternoon. 99 people, including crew, were on board PK 8303 coming from Lahore. #PIAPlaneCrash

Visuals show thick plumes of smoke rising from residential area in the vicinity of #Karachi airport after the crash of a #PIA plane coming from #Lahore with reportedly 107 passengers and crew on board.

"The plane PK 8303 with 99 passengers and 8 crew members has crashed," said Abdullah Hafeez, a spokesman for the national carrier. The rescue operation in the area is in progress.

According sources in the Sindh Health Ministry, at least 80 passengers have died and two survived in the incident. The injured are being treated at the Civil Hospital Karachi and Darus Sehat Hospital. Five bodies have been identified so far.

At least 48 bodies have been shifted to the Jinnah Postgraduate Medical Centre (JPMC) and 32 to the Civil Hospital. 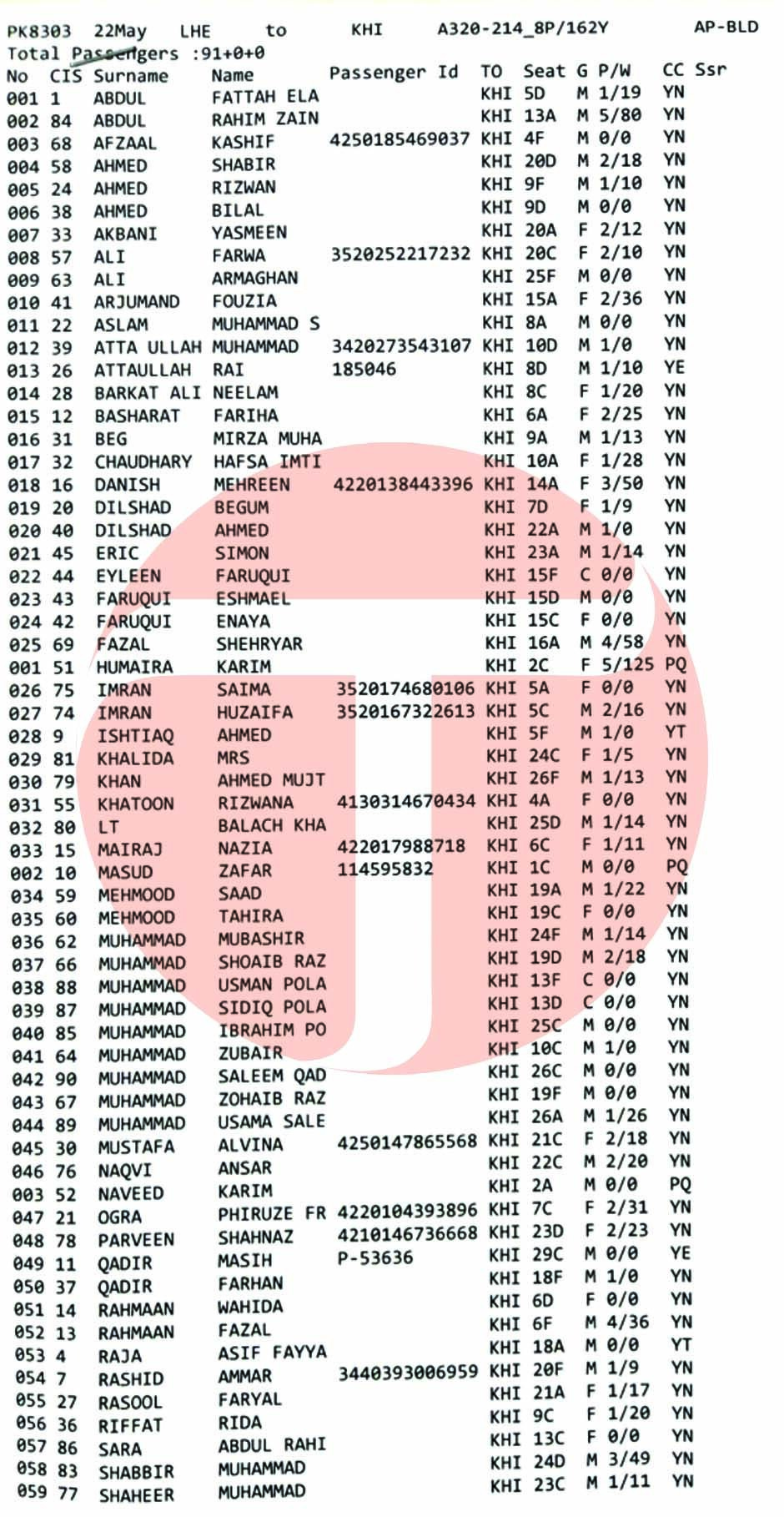 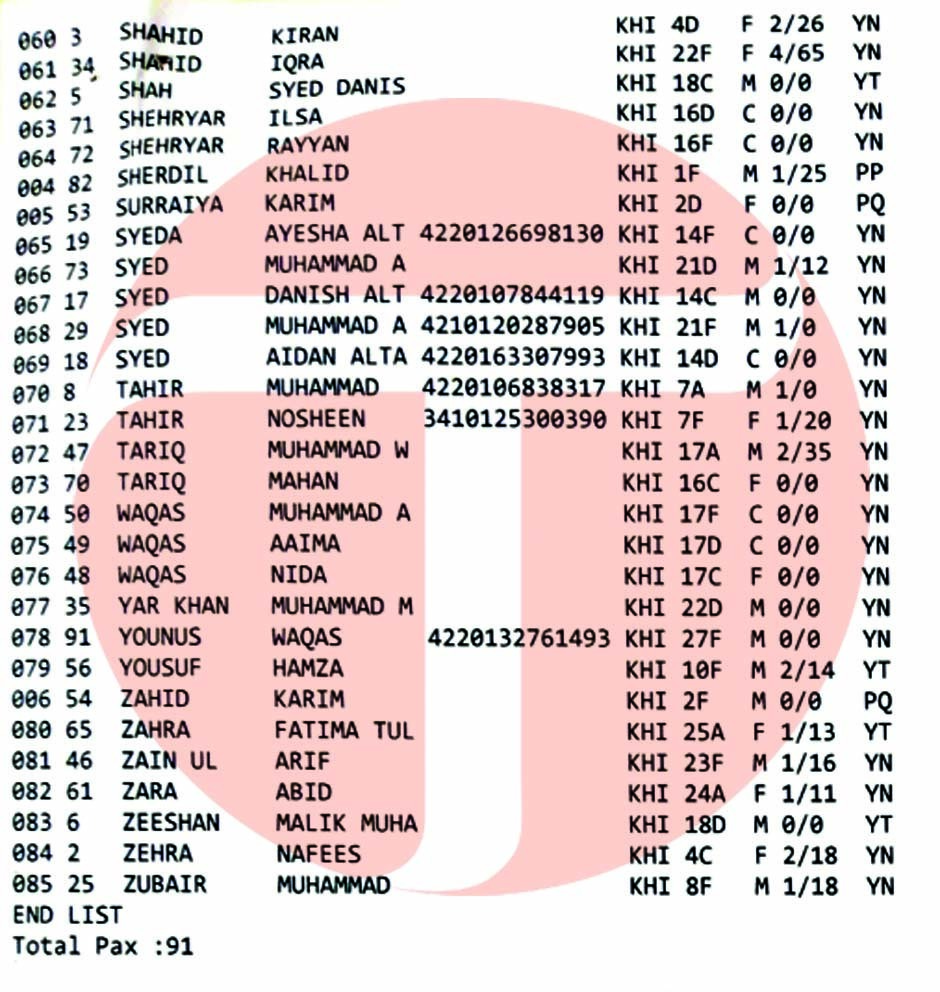 JPMC executive director Dr Seemin Jamali has confirmed that 48 bodies and five injured have been brought to the hospital. 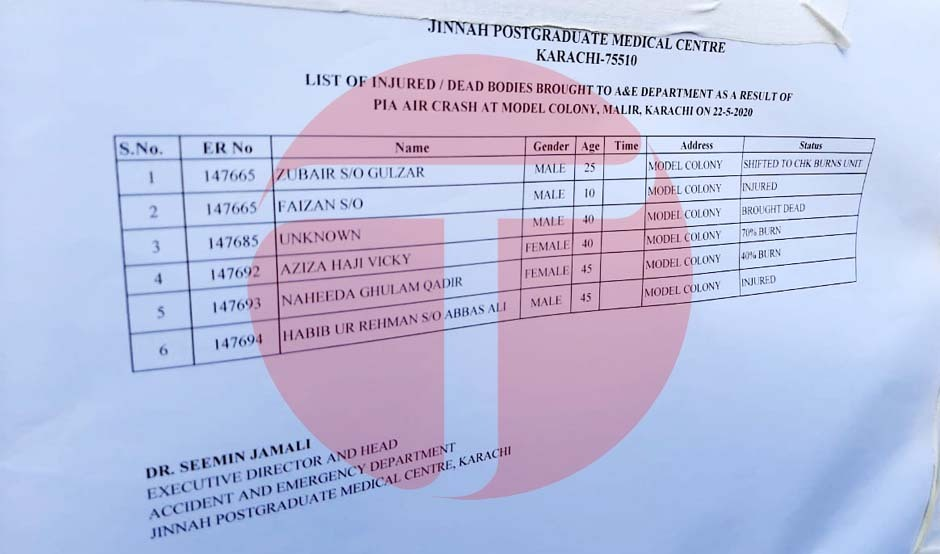 PIA’s Chief Executive Officer Air Marshal Arshad Malik has ruled any possibility that the plane had any technical or any other issue. "All standard operating procedures were followed before the plane's takeoff," he clarified in a news conference Friday night.

He said the inquiry will be held to ascertain the cause of crash. "PIA has best ranking in the safety index in the history."

He said the transparent inquiry will be held to ascertain the cause of crash and pledged to share the details of the investigation with the families of the victims.

Earlier, the PIA CEO said following the crash, that the pilot had informed air traffic control (ATC) that there was a technical issue and the pilot decided to go around rather than land. He added that two runways had been cleared for landing.

Sindh Health Minister Azra Pechuho says eleven bodies and six injured brought to Karachi's Jinnah Hospital. "Four of them are in stable condition, while the other two have burns." #PIAPlaneCrash pic.twitter.com/OLDLmZrbp5

An official told The Express Tribune that the plane was leased from China. Reportedly both engines failed, added the official.

“The plane took off from Lahore at 1pm and was scheduled to land in Karachi at 2:45pm.”

The Army Urban Relief Team has arrived in Karachi via a special flight from Rawalpindi to carry out relief work at the site of the plane crash.

According to the officials, the team is equipped with special equipment to aid the civil administration in carrying out the rescue operations. 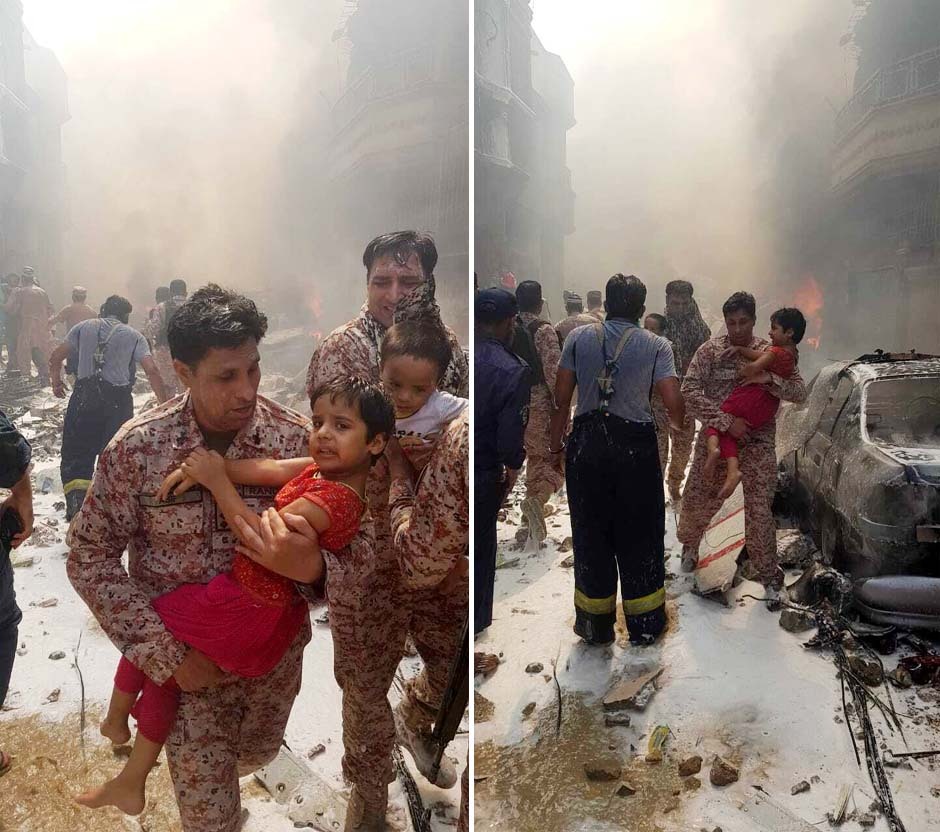 According to initial Reuters report, at least one passenger survived the crash, a government official said.

When the chief minister said “Murad is here”, the survivor replied “Thank you so much. God has been merciful,” the statement added.

Soon after the crash, residents joined the rescue efforts as firefighters put out the fire.

Residents join the rescue efforts as firefighters put out the fire in a locality near the Karachi airport after the crash of a PIA passenger plane coming from Lahore.https://t.co/LOdHLO1Amv pic.twitter.com/qjVcBUgy26

To speed up relief and rescue efforts, the Army Urban Search and Rescue Team with special equipment and rescue  specialist flown  from Rawalpindi through a special C130 flight, the Inter-Services Public Relations (ISPR) said in a statement.

Ten fire tenders employed at incident site and have extinguished the fire , it added. “Military ambulances are busy in rescuing injured and providing necessary medical care.”

Earlier, the National Disaster Management Authority (NDMA) had instructed all the urban search and rescue teams to reach the crash site, a spokesperson of NDMA said.

An official said that the NDMA was in touch with the local administration, local army corps and aviation authorities, adding that immediate rescue and recovery operation was launched.

He added that the immediate rescue of the occupants of the affected houses was the first priority.

A statement by the ISPR said Pakistan Army Aviation helicopters have arrived on the spot for rescue efforts and damage assessment while Urban Search and Rescue teams are also on the ground.

Sindh Chief Minister Murad Ali Shah, after reaching the site of the incident, directed for immediate medical and other aid to be provided to the affectees. He also requested the public to not rush to the crash site.

Sindh Chief Minister Murad Ali Shah visits the site of the crash of the PIA aircraft to assess damage and review rescue efforts.

Prime Minister Imran Khan, while expressing deep sorrow over the loss of precious lives as a result of PIA passenger plane crash in Karachi, has ordered an immediate inquiry into the plane crash.

The premier has directed the concerned agencies to provide relief, rescue and immediate medical aid to the affected peoples. He prayed for the deceased and patience of the bereaved.

Shocked & saddened by the PIA crash. Am in touch with PIA CEO Arshad Malik, who has left for Karachi & with the rescue & relief teams on ground as this is the priority right now. Immediate inquiry will be instituted. Prayers & condolences go to families of the deceased.

Chief of the Army Staff General Qamar Javed Bajwa has also expressed grief over the loss of lives in the crash.

Following the crash, Sindh Minister of Health & Population Welfare declared an emergency in all major hospitals of Karachi.

In Pakistan’s most recent deadly crash, 47 people died when a PIA jet smashed into a mountainside in Khyber-Pakhtunkhwa province in 2016. The country’s worst plane disaster came in 2010 when an AirBlue flight crashed killing 152 people near Islamabad.

Expressing his condolences over the tragic incident, Indian Prime Minister Narendra Modi took to the Twitter, saying: “Deeply saddened by the loss of life due to a plane crash in Pakistan. Our condolences to the families of the deceased, and wishing speedy recovery to those injured.”

Deeply saddened by the loss of life due to a plane crash in Pakistan. Our condolences to the families of the deceased, and wishing speedy recovery to those injured.

We are in midst of grave challenges as a nation & in these times of trial we must show resolve & unity, he added.

Deeply grieved over devastating plane crash in res area flying to Khi & mins away from landing with many making way home for Eid. Terrible tragedy, my prayers with all families. We are in midst of grave challenges as a nation & in these times of trial we must show resolve & unity

Turkey and Latvia have offered condolences to Pakistan over the deadly plane crash.

“Deeply saddened by the crash of plane close to Karachi Airport in brotherly #Pakistan. May Allah's mercy be upon those who lost their lives in the crash. Condolences to our Pakistani brothers & sisters. Friendly & brotherly Pakistan’s pain is our pain,” Turkish Foreign Minister Mevlut Cavusoglu said on Twitter, tagging his Pakistani counterpart Shah Mahmood Qureshi.

Thank you always for your support and brotherhood. Together we are stronger in these trying times. https://t.co/sziE3GWxBq

Latvia Foreign Minsiter Edgars Rinkēvičs in a tweet from his official handle sent "heartfelt condolences" to plane victims and their families.

Thank you for your concern and support. https://t.co/rjYeiE0Ok9

Mohammad Baig | 2 months ago | Reply | Recommend How easy it is to just say sorry on account of the engine failure or the technical failure or the missing of abc with launching an inquiry. How a plane with passengers can fly without 100% verified and testing and okay reports just to play with lives.
Replying to X
Saved ! Your comment will be displayed after the approval.
Error !
Error! Invalid Email.