Washin­gton once again raises seriou­s questi­ons about lack of transp­arency in CPEC
By Kamran Yousaf
Published: May 20, 2020
Tweet Email 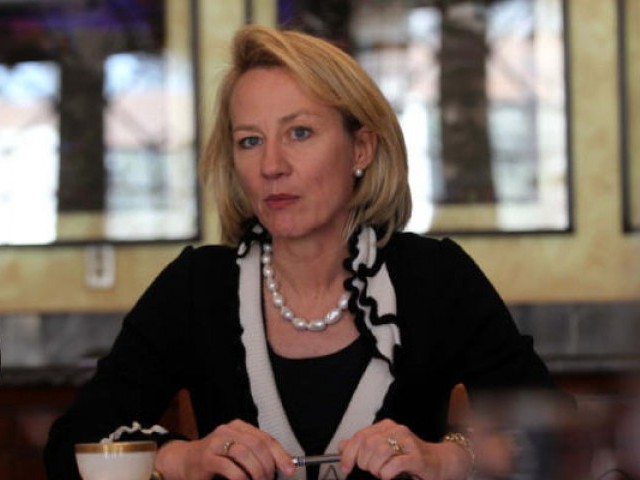 We hope China will join in either waving off debt or renegotiating these loans and creating a fair and transparent deal for Pakistani people,, says Alice Wells. PHOTO: FILE

ISLAMABAD: The United States on Wednesday urged China either to wave off or renegotiate what it called “unsustainable and unfair” debt of Pakistan as it once again raised serious questions about the lack of transparency in the multibillion-dollar China-Pakistan Economic Corridor (CPEC).

“At a time of crisis like Covid-19, it is really incumbent on China to take steps to alleviate the burden that this predatory, unsustainable and unfair lending is going to cause to Pakistan,” said Alice Wells, the outgoing US Assistant Secretary of State for South and Central Asia.

“We hope China will join in either waving off debt or renegotiating these loans and creating a fair and transparent deal for Pakistani people,” Ambassador Wells said while addressing a farewell news briefing through a video link attended by journalists from South and Central Asia.

This was not the first time the US and Wells in particular publically questioned the viability of CPEC. Wells in the past also expressed similar views, declaring CPEC detrimental to Pakistan’s economy.

China always dismissed the US claims and instead challenged Washington to match its economic assistance to Pakistan.

Ambassador Wells, who is retiring this week, said the US supports CPEC and other development projects as long as they meet international standards, uphold environmental and labour standards.

“I enumerated my concerns and the United States government’s concerns over CPEC, over the lack of transparency involved in the project, over the unfair rates of profits that are guaranteed to Chinese state organisations to the distortions it caused in the Pakistani economy including by the massive imbalance in the trade Pakistan now has with China,” she argued.

Pakistan has been seeking debt relief from G20 countries to offset the negative fallout of coronavirus on its economy.

China is part of the G20 and is likely to defer payment of around $300 million debt Pakistan was supposed to repay this year.

But the statement by Ambassador Wells appears to suggest that the US is seeking wider review of CPEC by China.

It is almost certain that both Islamabad and Beijing would dismiss Washington’s latest concerns over CPEC.

Some observers believe that the US opposition to CPEC stemmed from the larger trade tussle between Washington and Beijing.

Wells not only targeted the CPEC but at the same news conference sided with India over the recent border tensions with China. “The provocations and disturbing behaviour by China that poses questions about how China seeks to use its growing power.”

The top US diplomat also spoke about President Trump’s South Asia strategy, which according to Wells, brought fundamental change in approach towards Pakistan.

She said that Trump’s strategy had made it clear that Pakistan had to take decisive action against terrorist and militant groups that supported conflict in Afghanistan.

The suspension of security assistance by President Trump in January 2018 was a demonstration of that resolve to hold Pakistan accountable for the alleged presence of terrorist groups on its soil, she added.

According to Wells, since then Pakistan had taken “constructive steps” to advance Afghan peace process. She said Ambassador Zalmay Khalilzad had developed “solid cooperation” with Pakistan civil and military leadership.

“Pakistan is also taking initial steps towards curtailing other terrorist groups that threatened the region such as arresting and prosecuting Laskhar-e-Tayaba leader Hafza Saeed and beginning to dismantle terrorist financing structures.

“And as Pakistan’s commitment to the regional peace grown, we see initial growth in our relationship with Pakistan as well particularly in trade,” she further said.

She welcomed the recent power sharing deal between President Ashraf Ghani and his rival Abdullah Abdullah in Afghanistan and hoped that this would lead to intra-Afghan dialogue.

Wells was hopeful that the process would succeed despite many difficulties while urging the Afghan government and Taliban to join hands against Covid-19 and groups such as Islamic State Khorasan.

To a question, she said it was up to India whether it wanted to reach out to Taliban

But Wells indicated that India needs to have good relations with all sections of the government that is in the process of being created in Afghanistan.