Flood survivors: A house is not a home for some

Flood survivors: A house is not a home for some 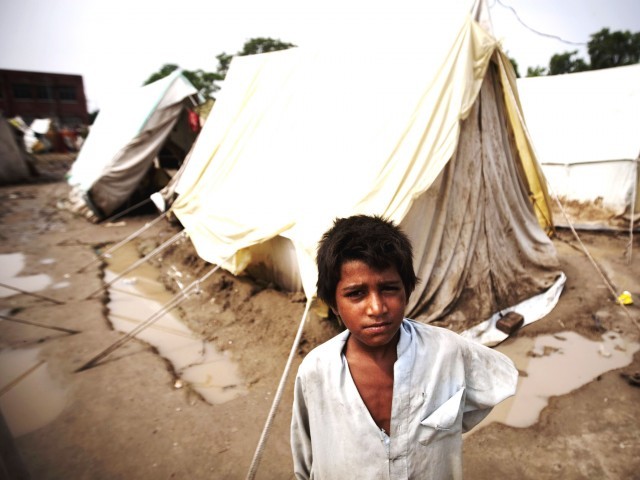 Muhammad Baksh, one of the 20 million victims of last year’s devastating floods, was also one of the relatively ‘lucky’ ones promised a ‘dream home’ by the Punjab government. Yet, as he holds the Certificate of Ownership to a house in Miraan Mullah Model Village Muzaffargarh, he still has not had the chance to enter it and call it home.

A resident of Muzaffargarh district, the worst-hit district of Punjab, Baksh was one of 106 flood-stricken people who were allotted houses in the model village. However, he still lives with his family in a tent outside the village.

Model Village Muzaffargarh is the only village of its kind in Punjab where construction work has been completed and all 106 homes have been handed over – on paper – to the flood victims. Although Punjab Chief Minister Shahbaz Sharif has time and again termed the village a success, the facts on the ground vary.

Residents of the village told The Express Tribune that there are some 14 families that still need to be settled in the village, despite getting an allotment. “The land on which this village has been constructed wasn’t the Punjab government’s property. Locals, whose houses were demolished in the floods, gave it to the government on the condition that it would construct houses for them. However, as it turns out, several people who didn’t donate land have been allotted houses and subsequently those who donated lands are not allowing this to happen,” said Rafique Bhatti, a local and one of those who donated land.

Baksh said, “The Model Village was designed for those who lost their homes in the floods. If I had any piece of land that I could donate, I would have. The government verified that I lost everything I had and allotted me this house”. He added that a person named Moazam Bhatti claimed that the land on which Baksh’s house is built belonged to him. “I can’t fight him, so I can’t live in the house that, on paper, is in my possession,” Baksh told The Express Tribune.

The construction of 106 houses in Model Village cost the government around Rs47 million. Out of the amount, Rs8.2 million was spent on the construction of a school; Rs3.3 million on dispensaries and Rs2.3 million for a livestock centre, among other expenses.

While several people who did not donate any land but got allotment are waiting to get possession of the houses, there are some who have not obtained a house at all in the village despite donating land.

“A house has been constructed on my land but given to someone else. If the government had to donate a house to someone else, it should have built this model village on its own land,” said Anwar Mai, a widow and mother of two.

“Allah Wasaya and Ghulam Farid, who are local landlords and don’t need a house in this locality, have been allotted houses while I am still waiting for one,” said Tahir Abbas, another local who had donated 302.5 square yards of land.

However, Muzaffargarh DCO Tahir Khurshid, who is looking into the affairs of the Model Village, said he was unaware of any such problem. “There must be some internal problem among residents because we have allotted the houses on merit. So far no one has approached me,” he said, adding that he would look into the matter.

The Model Village isn’t the only thing where problems exist after rehabilitation in Muzaffargarh. Abbas Wala Bund, the point where a 2.5-kilometre breach near Kot Addu on River Indus occurred during last year’s floods, continues to cause fear among residents. “The bund has been constructed using clay. The seepage of water has started and if a flood occurs, a breach can take place again resulting in even more damages than the previous year,” said Abdul Ghafoor, a local in the area.

Taunsa Barrage Executive  Engineer Hamid Mahmood, however, rejected these apprehensions. “We have done sufficient work. There were a few cracks but we have filled them up,” he said.