One year later, relief work still not up to the mark.
By Reuters
Published: August 1, 2011
Tweet Email 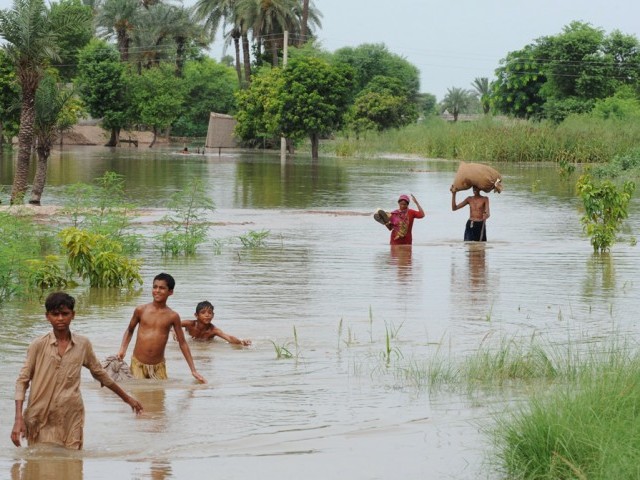 One year later, relief work still not up to the mark. PHOTO: AFP/FILE

A year after deadly floods swept through Nowshera resident Imtiaz Ali is seething with anger as he struggles to rebuild his life with almost no help from the government.

Nowshera was one of the hardest hit towns in the  mountainous northwest, where flash floods wiped out entire villages leaving behind tangled branches, mud and many thousands of people needing help.

Ali and his family, who has been living in tents since the flood seriously damaged their home, say they have only just got a little assistance.

“We have just received 20,000 rupees and are building a room to live in,” Ali said as his 14-year-old son slopped cement on a wall of the room.

“No politician visited us throughout the year to see how we were living … They may have gone to influential and rich people and given money to them, but we just got the 20,000 rupees, nothing else.”

It’s a refrain heard all over Pakistan a year after the floods were triggered by several days of torrential rain over denuded, over-grazed mountains.

Muddy torrents raged down valleys in the upper Indus river basin, destroying almost everything in their path, then spread out in a glassy sea that flowed south for weeks, inundating expanses of Punjab and later Sindh provinces.

About 2,000 people were killed and 11 million left homeless. In all, more people were affected — 18 million — than in the 2004 Indian Ocean tsunami, Pakistan’s 2005 earthquake, Hurricane Katrina in 2005 and the 2010 Haiti earthquake combined.

The country suffered more than $10 billion in damage to infrastructure, irrigation systems, bridges, houses and roads. More than 800,000 families remain without permanent shelter, according to the aid group Oxfam, and more than a million people need food assistance.

“Hina Rabbani Khar came here about a week after the flooding but she did not visit the flooded area,” said Rana Farmanullah, 28, of Mehmood Kot, a badly hit village in Punjab province, referring to a senior government politician who is now foreign minister.

“We’re not going to vote for her in the next election.”

The disaster certainly hasn’t helped those Pakistanis striving to shore up the shaky foundations of civilian democracy in a country where the army has ruled for more than half its 64-year history.

The rainy season has begun again but for now, there’s no sign of a repeat of flooding on the scale of last year. That’s just as well because little appears to have been done in terms of preparations for a repeat.

For years, not enough has been done to protect people before disasters strike, she said.

“There hasn’t been the investment in the civilian government institutions that would help prepare the country for disasters … The mindset is very much, ‘Let’s let a disaster happen and then we’ll respond’.”

In Sindh province, work on flood protection is unfinished as the new rains fall because of a lack of funds.

“The repair and strengthening work on many embankments is still continuing,” said a provincial official.

Oxfam said flood reconstruction would cost about $10.9 billion, almost one quarter of the national budget.

But the World Bank and the Asian Development Bank, both major donors to Pakistan, say investment of $27 million to strengthen disaster management and map flood hazards could reduce the risk of disaster and save billions in the long run.

Ahmed Kamal, spokesman for the National Disaster Management Authority, said the floods last year were a “once in a lifetime” disaster, nevertheless, authorities would be better placed to handle anything similar.

“We are better prepared,” he insisted.