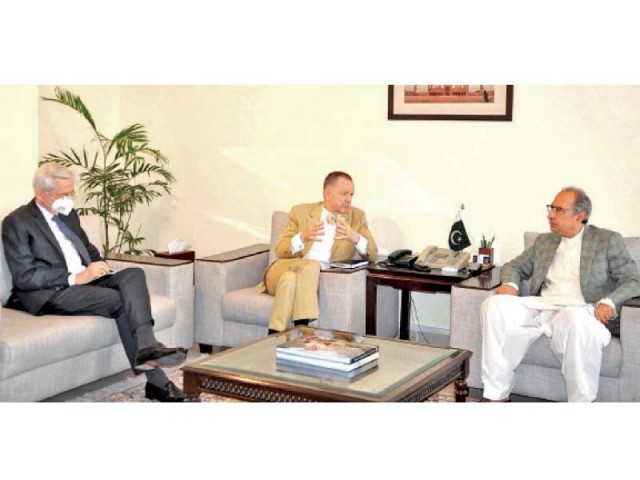 Abdul Hafeez Shaikh said due to the ongoing circumstances, “it is expected that Pakistan’s economic growth may be between negative 1% and 1.5%”. PHOTO: INP

ISLAMABAD: Pakistan does not have a plan to seek the rescheduling of commercial loans and its future borrowing will largely be limited to repaying the maturing debt, Finance Adviser Dr Abdul Hafeez Shaikh said while talking to two ambassadors of G20 nations.

“Pakistan is not going for any commercial loan rescheduling until now,” a finance ministry statement quoted the adviser as saying.

Out of the $74-billion external public debt as of December 2019, 23% or $17 billion is commercial debt obtained from foreign commercial banks and by floating sovereign bonds, according to the Economic Affairs Ministry. This includes nearly $10 billion in commercial loans and $7 billion worth of Eurobonds.

Pakistan’s total debt-to-gross domestic product (GDP) ratio is projected to jump to 90% by the end of next month due to a steep reduction in tax revenues and a growing debt servicing cost because of ill-advised monetary policies.

The Finance Division would adhere to requirements of the Debt Limitation Act before planning to take additional burden as most of the loans would be for the purpose of clearing the old debt stock, said the finance adviser.

However, successive governments have been violating the Fiscal Responsibility and Debt Limitation Act 2005. Under the law, Pakistan’s debt-to-GDP ratio should not be more than 60% – the threshold that the Pakistan Peoples Party (PPP), Pakistan Muslim League-Nawaz (PML-N) and Pakistan Tehreek-e-Insaf (PTI) governments have not been able to achieve.

The ambassadors of G20 member countries met with Shaikh 10 days after Pakistan formally requested the G20 to reschedule its debt maturing between May and December 2020. The ambassadors discussed details of the debt rescheduling offered by G20 countries and the need for any further loans, said the finance ministry.

The adviser said Pakistan’s firm stance in favour of debt rescheduling at the G20 forum was based on the belief that poorer countries genuinely required the assistance, though Pakistan had specifically benefitted lesser from the said relief.

“The $1.8 billion due in debt servicing to G20 countries till December 2020 is in the process of rescheduling,” said the finance ministry.

Pakistan sent formal requests to individual countries on May 1 under the G20 Covid-19 Debt Service Suspension Initiative. G20 countries have responded to the requests and modalities will now be finalised.

Pakistan will have to repay $1.8 billion to 11 members of G20. This includes $1.47 billion in principal loan repayment and $323 million in interest on loans. Also, $613 million worth of Saudi Arabian debt and $309 million in Chinese debt will mature.

Shaikh appreciated the support offered by the friendly countries, saying he hoped that the cooperation would continue in future as well for the benefit of people of the three countries. Under an IMF condition, $7.5 billion worth of loans that the PTI government secured from China, Saudi Arabia, the United Arab Emirates and Qatar cannot be returned during the period of the IMF programme.

These loans had been acquired for only one year to avoid default on international debt obligations but the IMF put a condition that the money would be rolled over every year until the programme ends in 2022.

SOPs thrown to wind as lockdown eased across country

Shaikh shared with the ambassadors the overall picture of Pakistan’s economy amid the coronavirus pandemic and its impact on the overall progress of the economy.

He pointed out that before the pandemic Pakistan was successfully able to control its current account deficit and expected economic growth of 3% in the ongoing financial year after observing strict financial discipline.

After the outbreak, the growth projections have become difficult to meet. Shaikh said “due to the ongoing circumstances, it is expected that growth might be between negative 1% and negative 1.5%”, said the finance ministry.