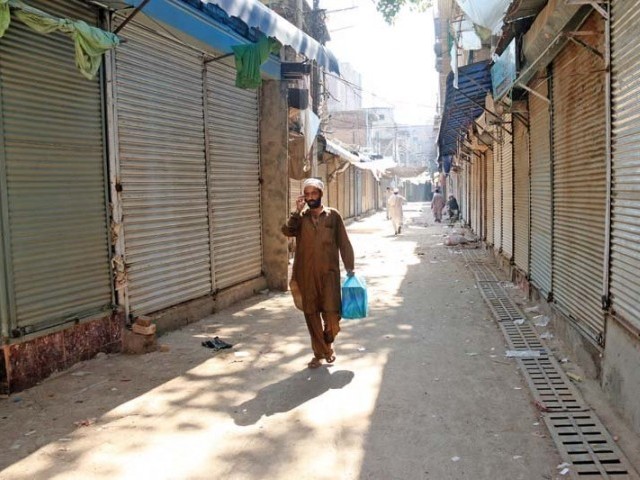 ISLAMABAD: The Central Tanzeem-e-Tajiran Pakistan chief on Thursday demanded that the government should end its partial lockdown imposed to curb the spread of the coronavirus pandemic and allow businesses to reopen across the country during Ramazan.

“If the government wants to prevent public gatherings, it should announce a countrywide curfew. This policy of allowing only some sectors to resume their activities while the others remain closed won’t be accepted,” Kashif Chaudhry said at a news conference in the federal capital.

“Prime Minister Imran Khan should take this matter seriously and consult with all stakeholders,” he added.

“The prime minister is seeking funds for the country’s economy and to combat the disease but not taking the stakeholders who actually matter on board.”

The head of the traders association said the government had failed to chalk out an effective strategy to enforce a lockdown in the country.

“Traders have been forced to shut their shops while people across the country are roaming freely outside,” he lamented.

Chaudhry further complained that the Centre and the provinces were not on the same page on the matter. “They need to stop doing politics on the lives of millions of people.”

The association’s chief demanded that the government should formulate a national strategy by taking the four provinces and traders into confidence.

“Markets have been closed under the pretext of a smart lockdown. The chief ministers of Sindh and Balochistan held talks with traders but they remained inconclusive,” he said.

“On the other hand, the chief ministers of Punjab and Khyber-Pakhtunkhwa don’t even have time to meet traders and listen to their grievances.”

Chaudhry condemned the arrest of traders and the registration of an FIR against them in Karachi for opening their shops.

“They must be released immediately,” he added.

A day earlier, All City Trader Union President Hammad Poonawala and others were taken into custody when traders at the city’s timber and iron market opened their shops in defiance of government orders.

The Napier police later filed a case against them.

Sindh Tajir Ittehad leader Jameel Paracha threatened to launch a “Jail Bharo” [having themselves voluntarily arrested to fill jails] if the traders’ demands were not met.

“The traders will reopen their shops from the first of Ramazan,” he said.

“We will not meet any negotiating team or minister of the government.”