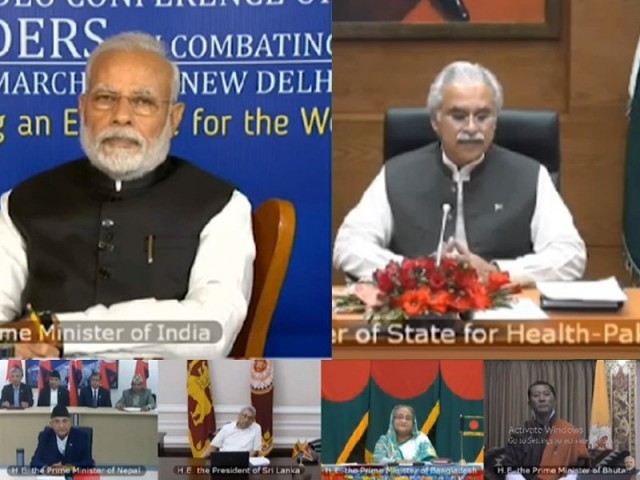 ISLAMABAD: Pakistan on Thursday sought the revival of the South Asian Association for Regional Corporation’s (Saarc) Technical Committee on Health in order to evolve a common strategy against the novel coronavirus virus.

The proposal was part of a host of measures suggested by Dr Zafar Mirza, the de facto health minister, while hosting a video conference of Saarc ministers and officials on the Covid-19 pandemic, according to the foreign office statement.

Dr Mirza, the special assistant to the prime minister on health services and regulations, chaired the meeting, attended by all member states and the Saarc Secretary General, Esala Ruwan Weerakoon, the Foreign Office statement said.

Issues, including real-time sharing of information and clinical data, capacity building and training of medical and paramedical staff, supply of medicines and medical equipment, research coordination and enhancing cooperation with frontline international organisations, including the World Health Organization (WHO) came under discussion.

Sharing Pakistan’s perspective, Dr Mirza underscored that South Asia was particularly vulnerable on account of its high population densities, fragile health systems and rudimentary disease surveillance. He said that the uncertainties associated with the outbreak had left no room for complacency, adding however that it also posed an opportunity for South Asia to strengthen health systems.

Dr Mirza briefed the participants about the containment and relief measures being taken by Pakistan, stressing that the National Coordination Committee headed by Prime Minister Imran Khan was focussed on implementing a national action plan against Covid-19.

He highlighted Pakistan’s strategy of smart lockdowns aimed at containing the virus, while ensuring that economic activity was minimally impeded. The participants agreed to work together to adopt best international practices keeping in view the specific socio-economic circumstances of South Asia.

During the conference, all heads of delegation presented their country situations and efforts to contain the outbreak at national levels. Proposals to fast-track creation of linkages among medical universities, academia and research institutions came under review.

Pakistan proposed greater coordination among health authorities of Saarc member states in the context of combating the pandemic and in this regard, suggested activating the Saarc Technical Committee on Health and Population Activities. It was agreed to enhance cooperation in the health sector, particularly in the context of efforts to combat the virus at the regional level.

“The Health Ministers’ Video Conference was a reaffirmation of Pakistan’s commitment to the Saarc process and its efforts to forge closer cooperation among Member States in situations such as the Covid-19 pandemic,” the foreign office statement read.

All the member states and the Saarc secretary general appreciated Pakistan’s timely initiative of organising the video conference. The Saarc has long remained dysfunctional because of the acrimonious relationship between Pakistan and India. But the outbreak of coronavirus has compelled member states to revive the regional grouping, which has never truly realised its potential due to Indo-Pak rivalry.

Speaking at weekly news briefing, Foreign Office spokesperson Aisha Farooqui said that the foreign ministry and its missions abroad continued to provide relief and assistance to the overseas Pakistani community in the wake of Coronavirus.

“Food ration and financial assistance is being provided to those in need,” the spokesperson said. She added that repatriation of Pakistanis was continuing as per a comprehensive and phased plan developed with the coordination of relevant stakeholders.

“A systematic campaign is unfortunately underway in India to demonise Muslims, who face increased exclusion as well as threat of mob violence,” the spokesperson said. She referred to the concern shown by the Organisation of Islamic Cooperation (OIC) over the rising anti-Muslim sentiments amplified by the Indian government’s discriminatory policies.

The spokesperson also expressed concerns over the persecution of journalists in Indian occupied Kashmir, while reminding that Kashmir was an internationally-disputed territory and the killing of people, use of brute force and blocking communication links constituted violation of international laws.