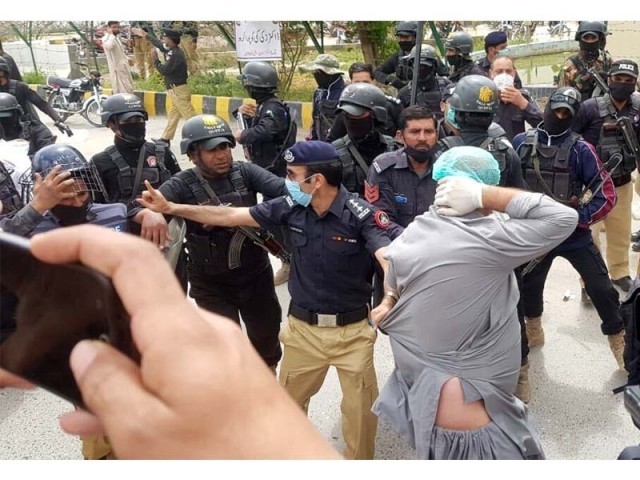 QUETTA: Police wielding batons used force to break up a protest by the Young Doctors Association (YDA) against a lack of protective gear against coronavirus, arresting around 100 medics, after they refused to stop their march towards the Chief Minister House in the provincial capital.

The protesters say that the government has failed to deliver promised supplies. Hundreds of doctors and paramedics, some in face masks and scrubs, chanted slogan in favour of their demands, when police tried to stop their march.

Police use batons to disperse the protesters, causing injuries to some marchers. They also arrested 100 protesters, including YDA office-bearers Dr Hanif Luni, Yasir Achakzai, paramedic Jamal Shah Kakar and others. The YDA said a number of doctors and paramedics had been injured in the baton charge.

However, a senior police official told Reuters news agency that 30 protesters had been arrested for defying a ban on public gatherings imposed during a lockdown to fight the spread of the virus. Doctors threatened to stop working unless the detained protesters were released.

Dr Abdul Rahim, a spokesman for the YDA, told reporters that failure to supply the medics with safety gear was putting them at risk. “A dozen doctors have been infected while other medical staff is also suffering,” he said.

Liquat Shahwani, a spokesman for the Balochistan government told Reuters that hospitals in Quetta dealing with coronavirus had been provided protective gear, and that the medics, who were demonstrating, were not among those fighting the virus.

“The doctors protesting don’t look after coronavirus patients; we don’t understand their justification for protesting,” Shahwani said. However, doctors insist they deal with hundreds of visiting patients daily who could be infected but are unaware, adding that medical workers who have so far been infected do not all work at such centres.