​ Our Correspondents April 03, 2020
ISLAMABAD / KARACHI / PESHAWAR / QUETTA / LAHORE: The novel coronavirus emerged in the central China city of Wuhan towards the end of last year and proliferated to almost the whole world within a couple of months. It’s not the virulence or fatality, but the infectivity of the new virus – also known as SARS-CoV-2 – that has set off a global frenzy. The COVID-19 respiratory illness caused by this mysterious contagion has so far infected more than a million people in 202 countries and territories of the world – more than 50,000 of them have died and counting.

China appears to have stemmed the tide against the viral outbreak as it has eased lockdown restrictions in Wuhan, the ground-zero of the virus, after two months, but new hotspots have emerged in Europe, Iran and the United States. In Europe, Italy and Spain are bearing the brunt as their death toll combined makes up more than half of the fatalities caused by COVID-19.

The virus has so far claimed 40 lives in Pakistan, while 127 COVID-19 patients have fully recovered.

Of these, 38 cases were reported in Karachi, five in Tando Muhammad Khan, two in Jamshoro and one each in Hyderabad and Badin.

Three people succumbed to the deadly virus – two in Karachi and one in Hyderabad – on Friday.

Sindh Chief Minister Syed Murad Ali Shah has thanked citizens and ulema for making the government’s decision of a complete lockdown at the time of Friday prayer a success.

“I'd like to thank everyone for making today's lockdown b/w 12pm to 3pm effective. I'm grateful to our Ulema for their understanding of the current situation. Some extraordinary decisions had to be taken during these extraordinary times - Government truly appreciates your support,” he wrote on his official Twitter handle.

I'd like to thank everyone for making today's lockdown b/w 12pm to 3pm effective. I'm grateful to our Ulema for their understanding of the current situation. Some extraordinary decisions had to be taken during these extraordinary times - Government truly appreciates your support.

The 54-year-old patient was tested positive earlier in the day and was a case of local transmission. The patient had a neurological disorder which affected his immune system.

With six new cases, Balchistan's COVID-19 tally has risen to 175. Punjab has reported another 57 cases to hit 1,069; Khyber-Pakhtunkhwa has confirmed 32 new cases to bring total number of patients to 343.

Giligit-Baltistan has also confirmed three new cases to raise the region's tally to 197.

The primary and secondary healthcare department of Punjab government has confirmed 89 new cases to take the provincial COVID-19 tally to 1012.

11 people have died with six patients have recovered in the province.

“It will serve as the nerve centre to faciltiate timely decision-making in Pakistan's battle against coronavirus,” the DG ISPR said.

The PM's pointperson on information said that ISPR and the information ministry will serve as the focal source of information for media regarding developments on and government's response to the pandemic.

“It was decided in today’s meeting that ISPR and Ministry of Information and Broadcasting will serve as the main source of information for media regarding coronavirus,” she said.

Maj-Gen Babar said that during the last 38 days we as a nation fought with full determination against this menace.

“People of Pakistan have shown exemplary resilience in dealing with the coronavirus over the last three months… I pay special tribute to doctors, paramedics, security personnel, on the frontlines of the battle against COVID-19 virus. I also thank ulema for their role,” said the ISPR DG.

Media has also reported objectively on the issue and kept the people aware, he added.

“The National Command and Operation Centre is operating under the NCC and is headed by Federal Minister Asad Umar,” said the chief military spokesperson. “It serves as a nerve centre to collate and analyse information received from provinces, after which recommendations are made to NCC so political leadership can make decisions,” he added.

Maj-Gen Babar said the decisions taken after recommendation made by NCOC included isolation of areas that were identified as hotspots. “It also helps us ascertain food, medical and equipment needed in targeted areas, and allows us to make time-sensitive decisions,” he added.

The ISPR DG said the media has a key role in the fight against coronavirus. “I am grateful to our media as it has been objective in its reporting and created awareness among the people,” he maintained.

The Khyber-Pakhtunkhwa (K-P) government has extended public holidays until April 11 as part of social distancing measures amid COVID-19 outbreak in the province. 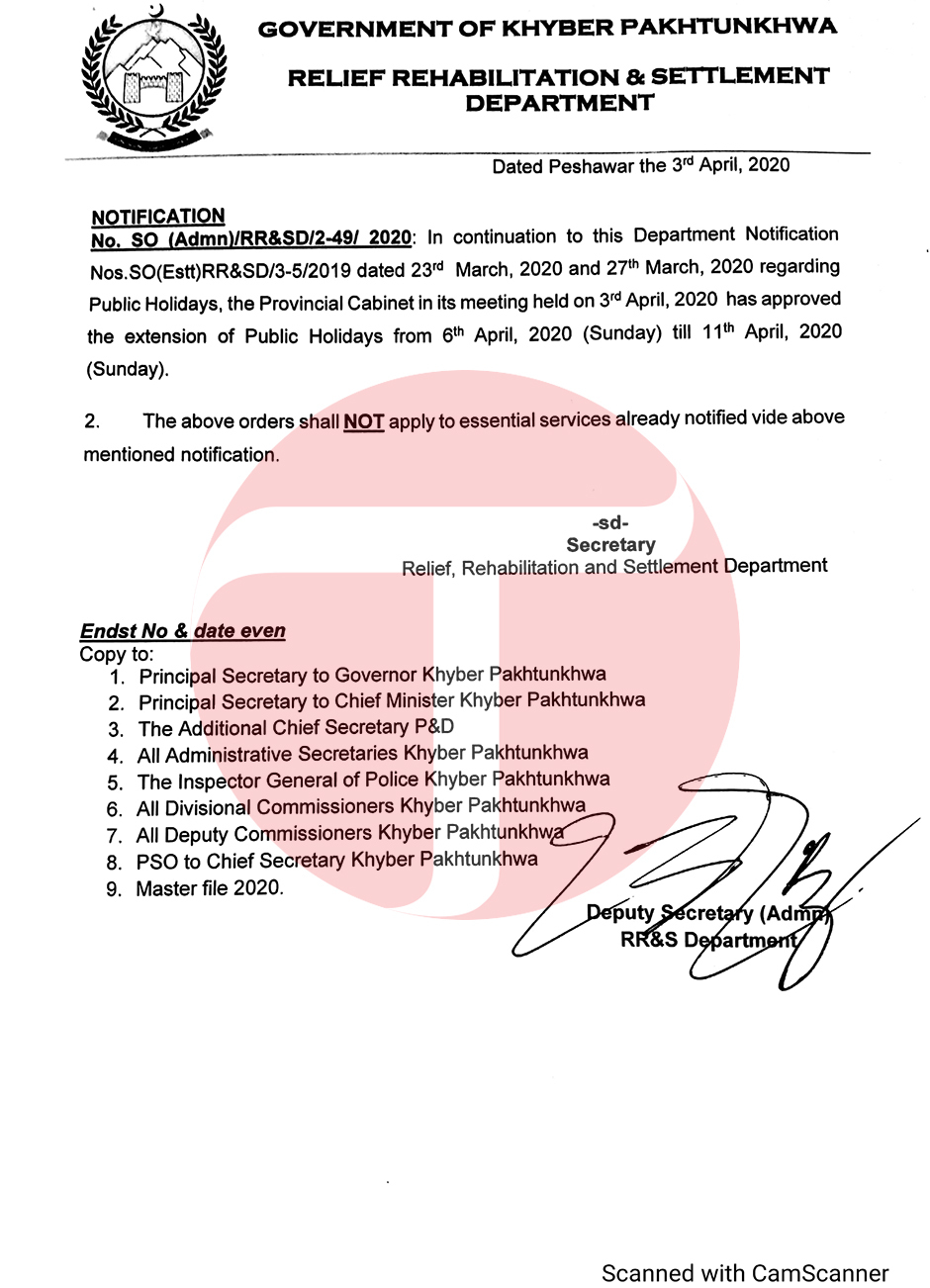 The media briefing was organised to announce a relief package for the construction industry amid coronavirus crisis in the country.

The prime minister also announced forming of the Construction Industry Development Board.

He said the construction industry is the second largest sector in the country which provides employment to the people. Daily wagers and labourers should must not suffer amid lockdown, he maintained.

The purpose behind reopening the construction industry is to enable daily wagers and labourers to continue earning their livelihood, he explained.

Announcing incentives for the construction industry, the premier said those who invest in this sector will not be asked about their source of income.

“Withholding tax on all construction related material has been waived off except on cement and iron,” he announced.

Prime Minister Imran further added that capital gain tax on property will not be charged on selling properties.

The opening of construction industry is necessary to keep the economy running, he said, adding that the sector will reopen from April 14.

“We will also announce relief [package] for people who cannot pay house rent and school fees,” said the prime minister. “The government is constantly monitoring the situation,” he maintained.

“This perception is dangerous that our country is immune to this virus. We are also facing threat from this pandemic and have to strictly follow preventive measures,” PM Imran said.

The premier reiterated that the federal government did not want to impose its decisions on provinces after the 18th Constitutional Amendment. “Provinces are empowered to take their own decisions,” he added.

“We have to maintain a balance between coronavirus and poverty,” he remarked.

The coronavirus patients, one 60-year-old and the other 82-years-old had tested positive on April 1 and were cases of local transmission.

The 60-year-old patient suffered from cardiac ailment and the 82-years-old had renal ailments. The total number of deaths in the province are now at 13.

Sindh Chief Minister Murad Ali Shah informed Prime Minister Imran Khan that the number of novel coronavirus cases could be much higher than the ones recorded in the province.

Briefing the premier over the situation in the province, Shah stated that only limited tests have been conducted in Sindh which is why the number of cases reported have been low.

12:20pm: Sindh CM says special care to be given to Thalassemia patients

He has asked to ensure the arrangement of blood in a timely manner.

Sindh Health Minister Dr Azra Pechuho said she would immediately reach out to blood banks in the province.

Despite the government's decision to impose a three-hour complete lockdown in the province, some mosques remained open for Friday prayers.

“The government and police are making statements to create a sense of fear. Nothing will happen. Karachi is a city of 20 million, the government can not implement its decision in every nook and cranny,” said the prayer leader of the Jamia Mosque Quba.

Despite an announcement from mosques to pray at home, around three to four dozen people attended the congregational prayers at Jamia Mosque Quba.

He said he has advised provincial governments to look for donors to facilitate Thalassemia patients as they frequently require blood transfusions.

Punjab Health Minister Dr Yasmin Rashid said 17,069 tests have been conducted in the province till date.

A Pakistan International Airlines (PIA) flight departed for Toronto with 295 passengers on board.

Prior to the departure, Civil Aviation Authority (CAA) and PIA management took necessary precautions to eliminate the risk of the virus.

Adviser to Sindh chief minister Murtaza Wahab thanked Dawat e Hadiyah and the Bohra community for their contribution of Rs20 million to the corona relief fund.


On behalf of the #SindhGovt & our people, I would like to express my heartfelt gratitude to Dawat e Hadiyah & Bohra Community for its generous contribution of Rs 20 Million into the #CoronaReliefFund

The Sindh government has imposed a complete lockdown from noon to 3:00pm across the province in a bid to maintain social distancing at the time of Friday prayers.

11:55am: PM to visit command and control centre today

Special Assistant to the Prime Minister on Information and Broadcasting Dr Firdous Ashiq Awan said the premier will visit the national command and control centre today.

He will be accompanied by Army Chief Qamar Javed Bajwa.

Punjab Chief Minister Usman Buzdar directed police authorities to treat them well. They should be educated about the current situation and should be provided with all the facilities at quarantine centres, he added.

The advisory also mentioned that members under quarantine should not interact with others outside.

Ten new coronavirus patients have recovered in Sindh, raising the number of recovered cases to 65 in the province.

11:25am: New cases emerge in Sindh, Punjab and Islamabad

22 new cases emerged in Sindh, six in Punjab and four in Islamabad as the number of confirmed coronavirus cases crossed 2,400.

Karachi police have arrested at least 1,368 people and registered First Information Reports (FIR) against 482 people for violating lockdown orders in the city.

22 new locally transmitted cases were reported in Sindh, raising the provincial tally of local transmissions to 438. 14 of the 22 cases emerged in Hyderabad, six in Karachi and two from the Tableeghi Jamaat in Ghotki.

10:30am: K-P to provide relief packages across the province

He added that the registration of poor families under the Ehsas Programme and Benazir Income Support Programme has started and relief cheques will be distributed within two days.

9:00am: PM Imran to announce package for construction industry today

He said it was important to maintain the economic activity in the country, despite the growing number of coronavirus cases.

The premier said it was necessary for the government to maintain a balance, allowing industries to provide employment to the poor.

Finance Adviser Dr Hafeez Sheikh said the government has allotted Rs200 billion for those affected by the lockdown.

12:32am: President Dr Arif Alvi requests everyone to stay safe

President Dr Arif Alvi requested everyone to stay safe and pray at home. He said the Prophet Muhammad (PBUH) allowed people to pray at home to avoid rain or cold weather and even during sickness.


My request to all of you, is to remain safe. All doctors of the world are unanimously advocating social distancing to discourage Coronavirus spreading. The govt is advising us to pray Zuhar instead of Jumu'ah. May Allah forgive us, but I believe that is the spirit of my religion. https://t.co/oyYdM34VGa