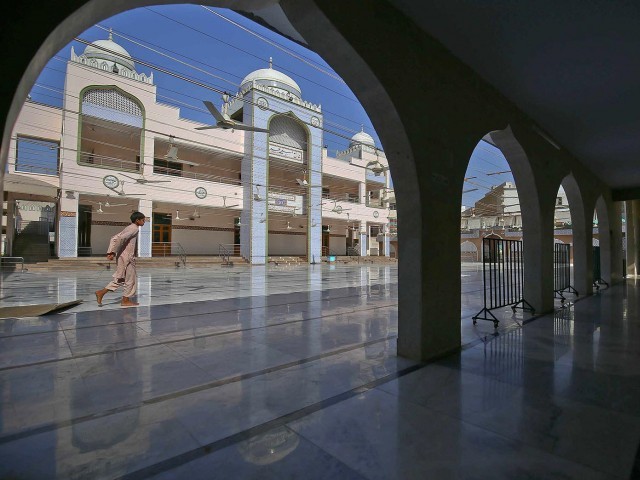 KARACHI: While most mosques in the city complied with the Sindh government’s ban on congregational prayers on Friday afternoon amid a three-hour lockdown, some clerics continued to defy the law, even leading to violence in one instance.

An incensed mob turned on the police officers who tried to prevent worshippers from offering Friday prayers at Liaquatabad’s Ghousia Mosque.

The khatib of the mosque, terming the lockdown ‘un-Islamic’, had said that the prayers would continue to be held there.

A video, going viral on social media, showed scores of angry people chasing police officials, throwing stones at them and forcing them to flee. According to area residents, the law enforcers had attempted to arrest the peshimam.

Karachi police chief Ghulam Nabi Memon said that the Liaquatabad police had registered a case against over 250 people, while arresting seven, including the prayer leader. He added that action would be taken against the imam who had incited the violence.

The FIR includes charges pertaining to multiple sections of the Pakistan Penal Code, as well as a clause of the Anti-Terrorism Act.
According to the police, when they found out about the congregational prayers being held at the mosque, they went there to arrest the imam. However, they claimed, the cleric incited the worshippers to violence, who attacked the police officials. The cops, trying to save their lives, were forced to flee.

Later, a heavy contingent of law enforcers returned to arrest the imam, along with several others.

Those who did attend Friday prayers at other mosques, along with the prayer leaders who led them, said they had left matters to the Will of Allah, adding that no harm would befall them unless it was Divine Will.

“The government and police are making statements to create fear. Nothing will happen,” insisted the imam at Jamia Mosque Quba, in Defence View – the only mosque out of four to open for prayers in the area, with three or four dozen people turning up to offer prayers there despite announcements to pray at home.

“Karachi is a city of 20 million people – the government cannot implement its decision in every nook and cranny,” he added.

The majority of mosques remained closed, however, while the few that were open witnessed thin attendance. Heavy contingents of police and Rangers personnel were also deployed in front of some mosques, including the New Memon Masjid in Kharadar, where scores of worshippers had arrived last week.

“Baitul Mukarram Mosque is in front of my home. It was closed, so we prayed at home,” Rizwan Siddiqui, who lives in Gulshan-e-Iqbal, told The Express Tribune.

At Siddique Akbar Mosque in Akhtar Colony, Qari Abdul Basit said that only five people had prayed at the mosque, as permitted by the government. “We had already informed the area’s citizens not to attend Friday prayers, since there is a ban on crowds assembling,” he explained.

Sindh Information Minister Nasir Hussain Shah, meanwhile, in a video message, thanked the people of Sindh for praying at home on Friday. He said that 98 per cent of people had followed the government’s decision of a full lockdown.

“I hope the two per cent who defied government orders will reconsider their decisions next time,” he added.

In other towns and cities of the province, including Sukkur, Larkana, Hyderabad and Mirpurkhas, the doors of most mosques were locked, with only four or five people belonging to the mosque offering prayers inside.

In many villages in rural areas, though, the ban could not be implemented.

“We prayed Friday prayers at our Jamia Mosque with the usual number of worshippers,” Abdul Hanan, a resident of a village in Qambar-Shahdadkot, told The Express Tribune. “The partial ban is only implemented in the cities and towns. Here, people pray at the mosque five times a day without any fear.