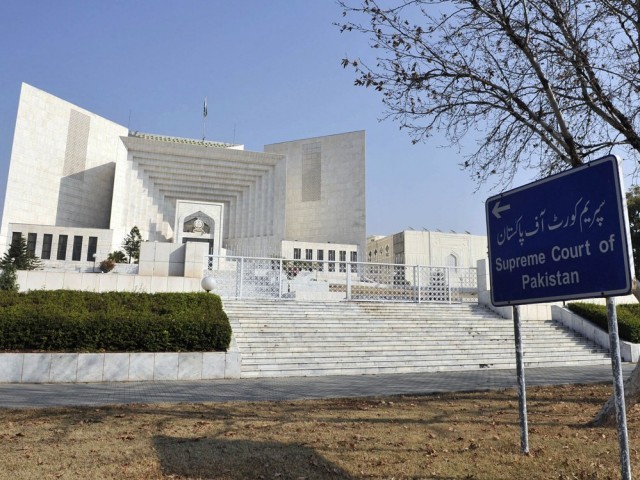 ISLAMABAD: The apex court has stopped the high courts and the provincial governments to pass any order for release of under-trial prisoners (UTPs) amid deadly COVID-19 outbreak in the country.

A five-judge larger bench headed by Chief Justice of Pakistan Gulzar Ahmed on Monday also suspended operation of all judicial/ executive directives regarding release of such prisoners.

The IHC on March 20 ordered release of the UTPs detained in Rawalpindi’s Adiala jail in minor crimes and directed the Islamabad police not to arrest people in minor cases.

IHC Chief Justice Athar Minallah had issued the order while taking up a petition based on a report of the IHC judicial branch on Islamabad-based UTPs.  There were also reports that Sindh government was also planning to some prisoners to avoid spread of virus in jails.

However, a lawyer, Raja Muhammad Nadeem, moved the apex court against the order on Friday and the Supreme Court formed the larger bench on the same day.

“No further order shall be passed by any of the high courts and by any of the provincial governments/Islamabad Capital Territory/Gilgit-Baltistan of releasing the prisoners from the jails.

“If any order has been passed regarding release of the prisoners and not given effect or implemented till now, the same shall not be acted upon until further orders of this court,” said the SC order.

Bail is granted in accordance with law, not policy: SC

The court also appointed Sheikh Zameer Hussain as amicus curiae to assist this court in this matter before adjourning the case till Wednesday.

Earlier, when the petitioner’s counsel wanted to present his formulations, AGP Khalid Javed Khan came to rostrum and said though there may be issues about standing of the petitioner and the petition’s maintainability there is some divergence in orders passed by the high courts in this regard as well as the actions being taken by the provincial governments.

“As the matter has reached the Supreme Court which has jurisdiction to issue general directions and guidelines and there is a n urgent need to have uniform strategy to deal with the possible impact of the [coronavirus] pandemic in prisons.

“Therefore, after issuing notices to the provincial AGs and others, the court may pass guidelines to be followed in a more consistent manner,” he added. The AGP also suggests that the court may distinguish between UTPs and convicted prisoners.

“However, those charged with heinous offences including violence against children and women should not be extended this benefit and it should only extend people accused of minor offences.

“Likewise convicted persons should be considered only if release of the UTPs doesn’t significantly reduce jail population and there too benefit to extend only for those involved in minor crimes involving short terms or languishing for non-payment of fines but not for those involved in serious crimes,” he added.

Later, the SCBA President Qalb-i-Hassan while defending the IHC orders regarding release of the UTPs referred to a number of instances in which other countries released prisoners in the prevailing situation.

He said when the executive did nothing then the high court passed direction regarding release of prisoners. However, Justice Sajjad Ali Shah questioned how the high court grants bail to 120 narcotics accused through omnibus direction.  “Such order is against basic concept of bail.”

The CJ also wondered how the IHC can take suo motu notice. “Coronavirus is serious issue but we cannot permit release of prisoners involved in heinous crimes.”

He also questioned if someone who has committed a serious offence one week ago can be released. In the prevailing situation, what would be sentiments of complainant/victim, he asked. “No one should exercise powers beyond his limits. We have to maintain the rule of law in the country,” said the CJ.

After the court’s proceedings, the SCBA president said it would be better that the apex court while suspending the high court’s order directed health departments to conduct screening of all prisoners, who are helpless. He expected that the SC will give uniform guidelines for the release of prisoners. 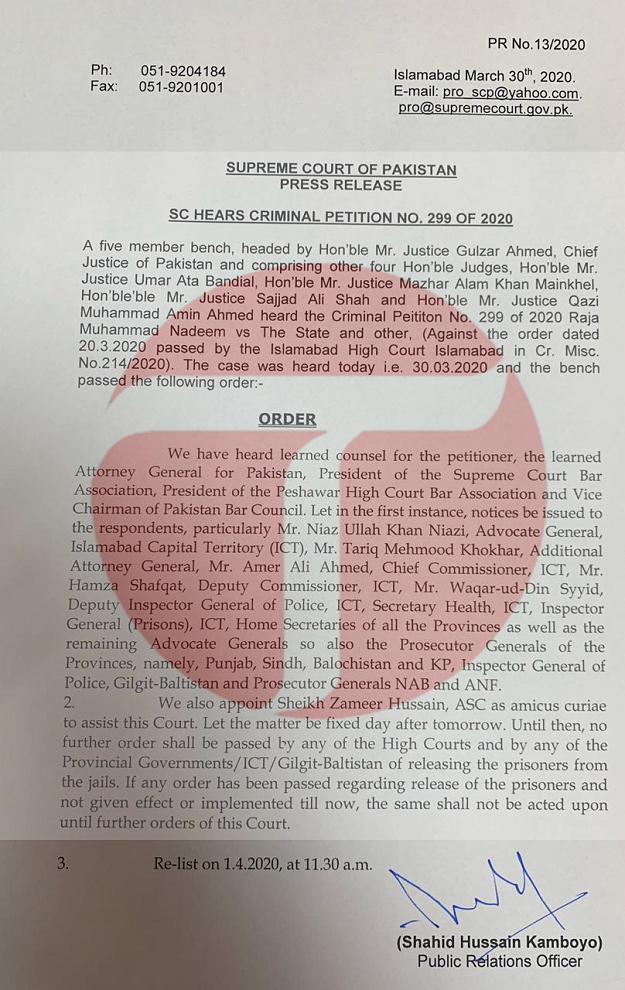