Previo­usly, the record was held by an Indian martia­l art player who had broken 229 walnut­s in one minute­
By ​ Our Correspondent
Published: March 28, 2020
Tweet Email 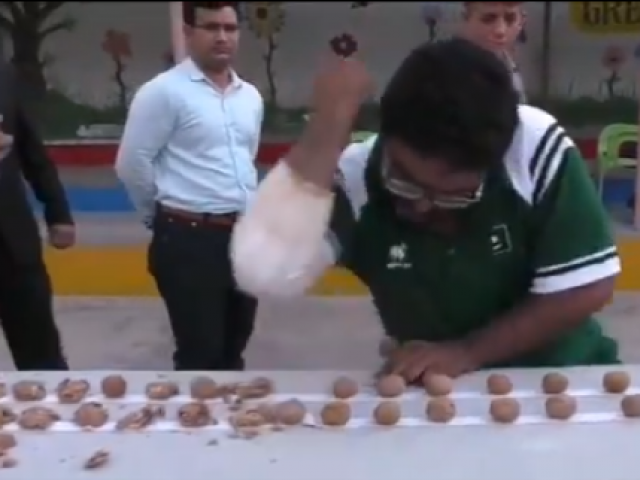 Muhammad Rashid, the martial artist who belongs to Karachi, has many Guinness World Records to his name. SCREENGRAB

KARACHI: Muhammad Rashid, a leading martial art expert in Pakistan, has snatched another Guinness World Record from arch-rivals India, crushing 256 walnuts within a minute at the Pakistan Academy of Martial Arts.

Rashid, the martial artist hailing from Karachi, has many Guinness World Records to his name.

The most walnuts crushed with the elbow in 1 min. is 256, & was achieved by Muhammad Rashid in Karachi, Pakistan on 1 Dec 2019.

Previously, the record was held by an Indian martial arts player who had broken 229 walnuts by his elbow in one minute.

However, Rashid after five months of unrelenting practice snatched the record from the Indian player and earned Pakistan fame at international level.

Rashid has set a total of 45 individual world records whereas Pakistan Academy of Martial Arts has now became the only academy in the world which has set 59 world records.

Earlier in 2017, Rashid in another world record pulverised 77 cans in just 60 seconds at an event  organised by Associazione Cons.erva in Gemona, Italy.

In the same year, he also set a new world record by smashing 43 coconuts with his head in just 60 seconds.