Rashid had to try his streng­th on the unopen­ed cans and crush them to a minimu­m width of 3cm in 60 second­s
By News Desk
Published: February 28, 2017
Tweet Email 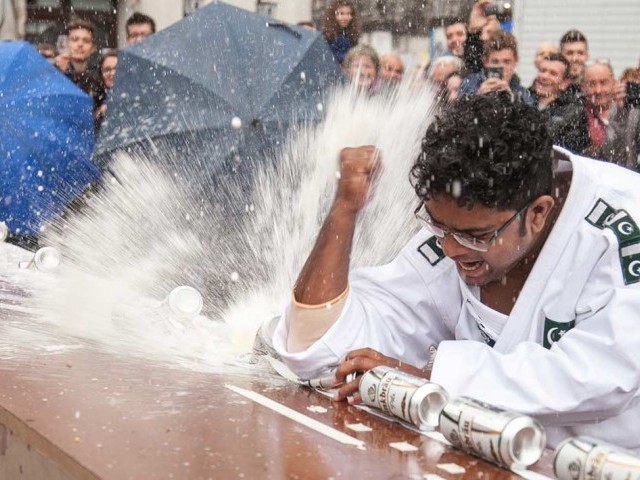 Muhammad Rashid, the martial artist who belongs to Karachi, has won many titles of the Guinness World Records over the years. PHOTO: GUINNESS

A Pakistani martial arts expert has made a world record by crushing 77 cans with his elbow within a minute, Guinness World Records said.

Muhammad Rashid, the martial artist who belongs to Karachi, has won many Guinness World Records titles over the years. The latest title came when he pulverised 77 cans in just 60 seconds as the audience saw in surprise with their umbrellas protecting them from the spray of the cans.

The record-making event was organised by Associazione Cons.erva in Gemona, Italy.

Pakistani man smashes record-breaking number of coconuts with his head

The Guinness World Records rules said that in order to create the record, Rashid had to try his strength on the unopened cans and crush them to a minimum width of 3cm. Rashid didn’t fail to astound the audience and the world at large.