UN Secret­ary-Genera­l Antoni­o Guterr­es warns that only a concer­ted global effort can stop the spread of the virus
By AFP
Published: March 26, 2020
Tweet Email 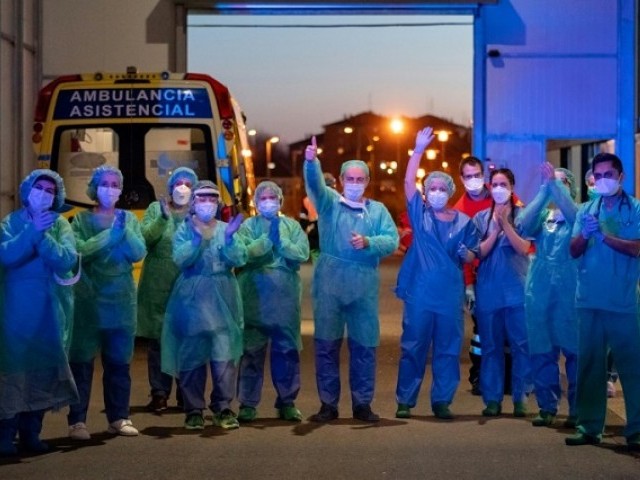 Healthcare workers dealing with the new coronavirus crisis applaud in return as they are cheered on by people outside a hospital in Burgos, Spain. PHOTO: AFP

PARIS: More than three billion people around the world were living under lockdown on Wednesday as governments stepped up their efforts against the coronavirus pandemic which has left more thaParisn 20,000 people dead.

As the number of confirmed cases worldwide soared past 450,000, UN Secretary-General Antonio Guterres warned that only a concerted global effort could stop the spread of the virus.

In Spain, the number of fatalities surpassed those of China, where the novel coronavirus first emerged three months ago, making it the hardest-hit nation after Italy.

A total of more than 20,800 deaths have now been reported in 182 countries and territories, according to an AFP tally. 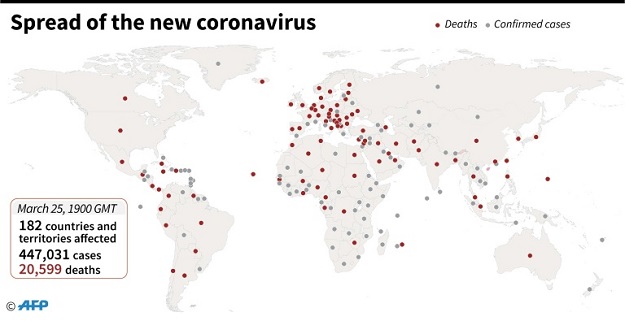 The spread of the new coronavirus. PHOTO: AFP

Stock markets rebounded after the US Congress moved closer to passing a $2.2 trillion relief package to prop up a teetering US economy.

In Washington, President Donald Trump said New York, the epicentre of the US outbreak with over 30,000 cases, likely has a few “tough weeks” ahead but he would decide soon whether unaffected parts of the country can get back to work.

“We want to get our country going again,” Trump said. “I’m not going to do anything rash or hastily.

“By Easter we’ll have a recommendation and maybe before Easter,” said Trump, who had been touting a strong US economy as he faces an election in November.

UN chief Guterres said the world needs to ban together to stem the pandemic. 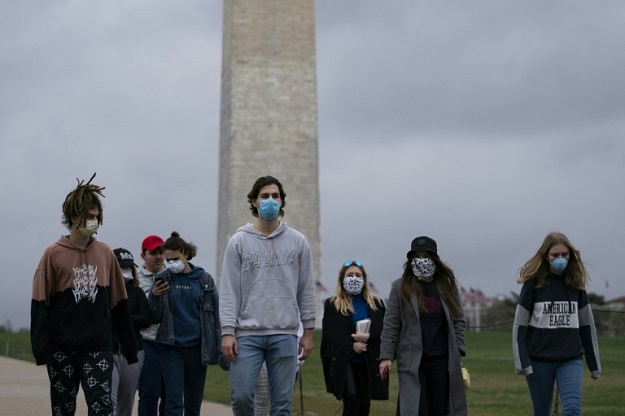 A group of young people wear protective masks as they walk near the Washington Monument on the National Mall. PHOTO: AFP

“Global action and solidarity are crucial,” he said. “Individual country responses are not going to be enough.”

India’s stay-at-home order for its 1.3 billion people is now the biggest, taking the total number of individuals facing restrictions on their daily lives to more than three billion.

Anxious Indians raced for supplies after the world’s second-biggest population was ordered not to leave their houses for three weeks.

Russia, which announced the death of two patients who tested positive for coronavirus on Wednesday, is expected to follow suit. 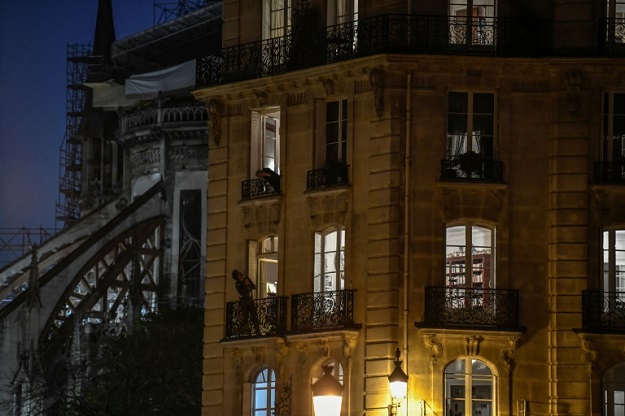 Neighbours talk to each other from their balconies in Isle Saint-Louis in Paris, on the ninth day of the lockdown in France. PHOTO: AFP

President Vladimir Putin declared next week a public holiday and postponed a public vote on controversial constitutional reforms, urging people to follow instructions given by authorities.

In Britain, heir to the throne Prince Charles became the latest high-profile figure to be infected, though he has suffered only mild symptoms.

The G20 major economies will hold an emergency videoconference on Thursday to discuss a global response to the crisis, as will the 27 leaders of the European Union, the outbreak’s new epicentre.

China has begun to relax its own draconian restrictions on free movement in the province of Hubei — where the outbreak began in December — after the country reported no new cases. 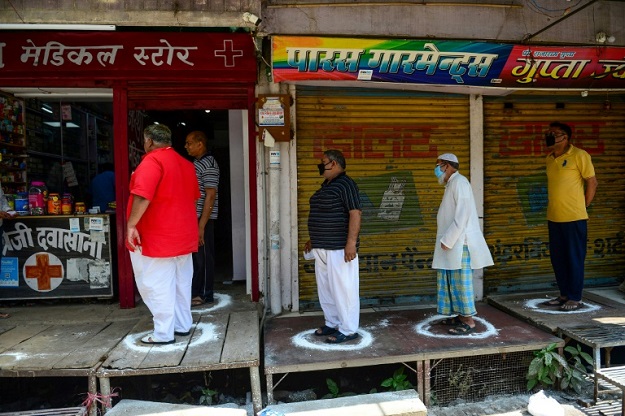 People stand on designated areas to maintain social distancing as they queue outside a medical store in Allahabad, India. PHOTO: AFP

Crowds jammed trains and buses in the province as people took their first opportunity to travel.

But Spain saw the number of deaths surge to more than 3,400 after 738 people died in the past 24 hours and the government announced a 432-million-euro ($467 million) deal to buy medical supplies from Beijing.

The number of French deaths was up by 231 on Wednesday to more than 1,330, and metro and rail services in Paris were cut to a minimum.

Spain and Italy were joined by France and six more EU countries in urging Germany and the Netherlands to allow the issue of joint European bonds to cut borrowing costs and stabilise the eurozone economy. 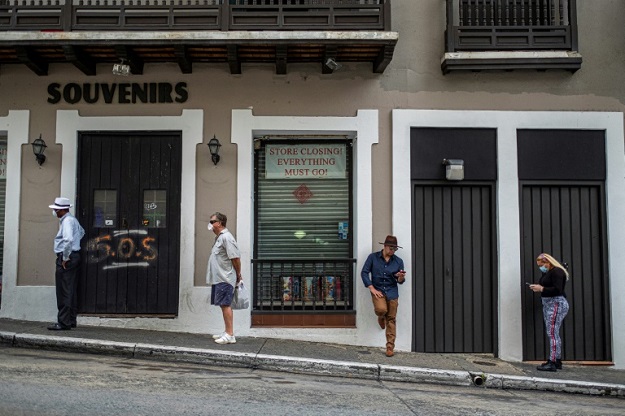 People line up at a safe distance to enter a supermarket that allows only five customers at a time in San Juan, Puerto Rico. PHOTO: AFP

The call is likely to fall on deaf ears when EU leaders talk on Thursday — with northern members wary of pooling debt with big spenders — but they will sign off on an “unprecedented” recovery plan.

“It is really hard, we had feverish people for many hours in the waiting room,” the 30-year-old told AFP.

“Many of my colleagues were crying because there were people who are dying alone, without seeing their family for the last time.”

Coronavirus cases are also spreading in the Middle East, where Iran’s death toll topped 2,000, and in Africa, where Mali declared its first case and several nations announced states of emergency.

In Japan, which has postponed this year’s Olympic Games, Tokyo’s governor urged residents to stay home this weekend, warning of a possible “explosion” of the coronavirus.

Jerusalem’s Church of the Holy Sepulchre, believed by Christians to house Christ’s tomb, was shut as Israel tightened movement restrictions.

The impact of the pandemic is also hitting European football, with leagues and tournaments cancelled, while the fate of the Wimbledon tennis tournament could be decided next week.

The economic damage of the virus — and the lockdowns — could also be devastating, with fears of a worldwide recession worse than the financial meltdown more than a decade ago. 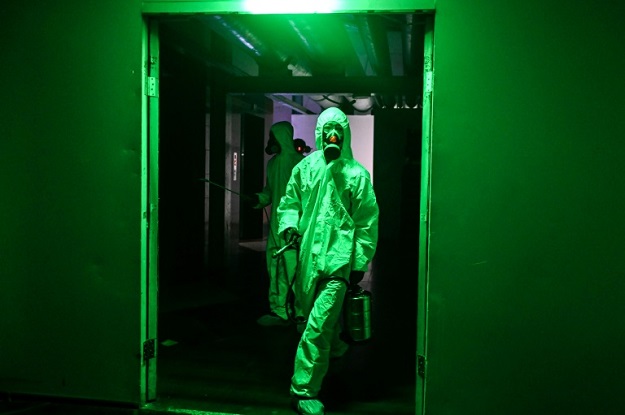 Workers wearing protective clothing disinfect a hotel as a preventive measure against the COVID-19 coronavirus in Yangon, Myanmar. PHOTO: AFP

But financial markets rose after US leaders reached agreement on a stimulus package worth roughly 10 per cent of the US economy, an injection Senate Majority Leader Mitch McConnell said represented a “wartime level of investment.”

Meanwhile, more than half of all Americans have been told to stay at home, including residents of the largest state, California.