12-year-old patient belongs to Dadu in Sindh and had arrived along with his family from Iran via Taftan border
Mohammad Zafar March 10, 2020 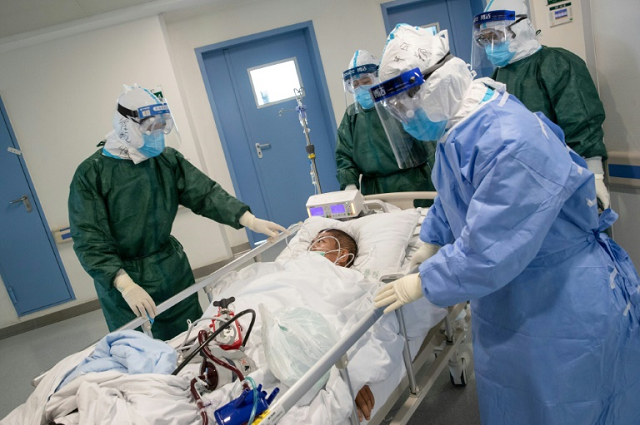 12-year-old boy belongs to Dadu in Sindh and had arrived from Iran via Taftan border, says head of a govt hospital. PHOTO: AFP/FILE
QUETTA: First case of COVID-19, the mysterious viral pneumonia-like disease caused by the novel coronavirus, has emerged in the Balochistan capital on Tuesday, pushing the countrywide tally to 19.

The 12-year-old patient had arrived in Quetta along with his parents from Iran via Taftan border, head of a government hospital said.

The family belongs to Dadu district in Sindh, said the medical superintendent (MS) of Fatima Jinnah Hospital, adding that parents, three siblings and paternal aunt of the child are tested negative.

“Blood samples were sent to the laboratory based on the family’s travel history of visiting coronavirus-infected areas in Iran,” Balochistan government spokesperson Liaquat Shahwani said.

Shahwani said the ambulance, in which he was taken to the hospital, has been parked at an undisclosed location after sterilisation. Driver of the ambulance has also been kept in quarantine with his blood samples sent for laboratory tests.

“One case in Quetta has come positive after two tests. The child is in Fatima Jinnah [Hospital] and the condition is under control,” he wrote.

One case in Quetta has come possitive after two tests. The child is in Fatima jinnah and the condition is undercontrol.

So far 19 Pakistanis have been tested positive for COVID-19 with 15 of them belonging to Sindh, three to Gilgit-Baltistan and one to Balochistan.

Meanwhile, Dr Zafar Mirza, the de facto health minister, has said the federal government is looking closely at the changing situation and new cases are being provided with the best medical care.

“No need to worry… the situation is completely under control. The federal and provincial governments are jointly making all-out efforts to protect the masses from coronavirus on war footing,” he wrote using his official Twitter handle.

Dr Mirza admitted that the coronavirus cases in Pakistan had doubled in the last 24 hours.

243/ Cases in Pakistan have more than doubled in last 24 hours. This is not surprising. Disease has spread in 106 countries. All 19 cases have brought this from abroad. All are stable. There is no evidence of local spread as yet. If we act responsibly we can avoid spread.

He also refuted his claim from yesterday when he had said that nine new cases from Karachi were all “contacts of an already confirmed case”.

“This is not surprising. Disease has spread in 106 countries. All 19 cases have brought this from abroad. All are stable. There is no evidence of local spread as yet. If we act responsibly we can avoid spread," he wrote.

“The government is working hard to contain the spread, but we all need to take our part in this fight,” he added.

244/ The most important to limit the spread of #coronavirus is to ensure that we observe hygiene by washing hands properly, avoid touching our face & keep distance with sick people. The govt is working hard to contain the spread, but we all need to take our part in this fight.

Earlier in the day, two more cases of novel coronavirus emerged from Sindh, pushing the tally to 15 in the province.

All educational institutions in Sindh and Balochistan have been closed till March 13 over fear of the contagious disease’s outbreak.

The mysterious COVID-19 virus, which originated in a vet market of the central Chinese city of Wuhan late last year, has since then spread to more than 110 countries of the world, killing over 4,000 and infecting over 115,000 people, mostly in China thus far.