Was mortal­ly terrif­ied of the idea of severa­l ‘mini Pakist­ans’ appear­ing all over the map of Europe.
By Salman Siddiqui
Published: July 25, 2011
Tweet Email 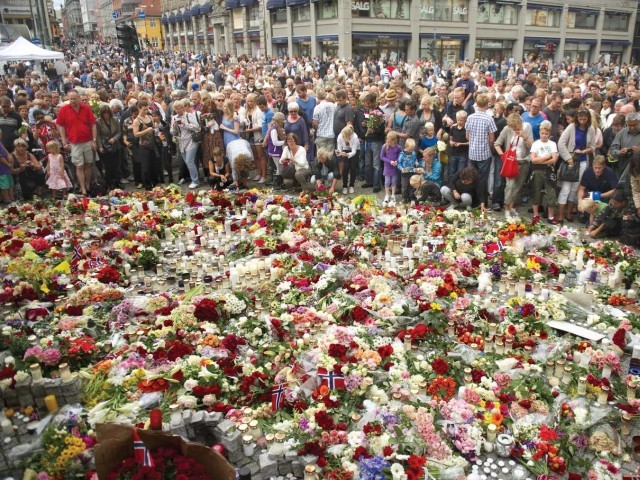 People crowd around a flower tribute in Oslo to the victims of the bomb explosion. PHOTO: AFP

Anders Behring Breivik, the Norwegian terrorist who killed more than 90 people in two attacks in Oslo, was mortally terrified of the idea of several ‘mini Pakistans’ appearing all over the map of Europe.

In a 1,600-page manifesto titled ‘2083: A European Declaration of Independence’, Breivik laid out a stark picture of the future of Europe, citing poor human rights in Pakistan as the fate of the continent. Norwegian authorities confirmed on Sunday that the manifesto was written by Breivik.

In his doomsday scenario for Europe, Breivik predicts that several ‘mini-Pakistans’ would  be created all over Europe by 2083, one in each country due to ‘Lebanon-style’ conflicts. “It could be similar to the division of India after World War II, with the creation of one or several Islamic ‘Pakistan’ enclaves,” he says.

While Breivik’s rhetoric against Muslim immigration into Europe is not unusual, he cites many names that might be familiar to Pakistanis, including Allama Muhammad Iqbal and Maulana Abul Ala Maududi, as well as prominent human rights activist Hina Jilani and Dawn columnist Irfan Hussain.

He seems to believe that Iqbal, in particular, was sympathetic to communism and views multiculturalism as a Marxist concept. He quotes Iqbal as saying “Islam equals communism plus Allah.”

Breivik also claims that Pakistan is systematically annihilating all non-Muslim communities. He claimed that Hindu girls are being forced to convert to Islam in Sindh. In this context he even quotes Hina Jilani as saying: “Have you ever heard of an Indian Muslim girl being forced to embrace Hinduism? It’s Muslims winning by intimidation.”

He goes on to describe the situation for Christians in Pakistan as being no better, citing Father Emmanuel Asi of the Theological Institute for Laity in Lahore as saying in 2007 that Pakistani Christians are frequently denied equal rights.

Jamaat-e-Islami founder Abul Ala Maududi is also quoted in the manifesto, though in a manner that would imply that the stated objective of an Islamic state is to kill or subdue all non-Muslims around the world.

Breivik seems to be a fan of Daily Times columnist Razi Azmi, whom he calls “one of the more sensible columnists of Pakistan”. He mentions one of Azmi’s pieces where the columnist asks whether it was possible to imagine a Muslim converting to Christianity or Hinduism or Buddhism in a Muslim country, using it to support his view of Islam as an intolerant religion.

His ire against Pakistanis and Muslims seems to have at least partial origin in personal experience. He speaks at length about his childhood best friend, a Pakistani Muslim immigrant to Norway who, despite having lived several years in Europe still appeared to resent Norway and Norwegian society. “Not because he was jealous… but because it represented the exact opposite of Islamic ways,” Breivik conjectures.

The inability of Muslim immigrants to assimilate into European society seems to bother him, which he blames on Muslim parents not allowing their children to adopt European ways. He also asks why Muslim girls are considered ‘off-limits’ to everyone, including Muslim boys, and why Muslim men view ethnic Norwegian women as ‘whores’.

He also seems to believe that the Muslims in Europe who collect government benefits view it as a form of jizya, a medieval Islamic tax charged on non-Muslim minorities.

That show, he says, is a dramatic demographic shift that he calls the ‘Pakistanisation of Europe’.

A morning spent reading poetry of the world