To the rescue: Sikh man on motorbike rescues dozens of Muslims during Delhi riots 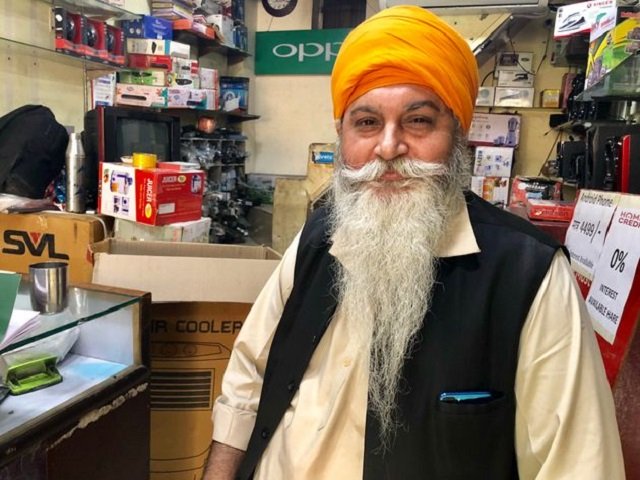 Mohinder Singh took exceptional steps to ensure safety of residents in worst-hit neighbourhood during Delhi Riots.PHOTO: HUFFINGTON POST
On 24 February, as the worst communal violence since the 1984 Sikh riots swept Delhi, Mohinder Singh and Inderjit Singh used a Bullet motorcycle and scooty to transport somewhere between 60 to 80 of their Muslim neighbours to a safe location.

The father and son duo say they had sensed the situation was spiralling out of control in the Hindu-dominated neighbourhood of Gokalpuri in northeast Delhi, and started moving their terrified neighbors in batches to the nearest Muslim locality of Kardampuri, one kilometer away.

Mohinder Singh, 53, said that his son was on the Bullet motorcycle and he was on the scooty, and they made around 20 trips each from Gokalpuri to Kardampuri in one hour. When it was women and children, they took three to four of them at a time. When it was men and boys, they took two or three at a time. For some of the boys, they tied Sikh turbans to conceal they were Muslim.

“I did not see Hindu or Muslim,” said Singh, who runs an electronics store and is a father to two children.

“I just saw people. I saw little children. I felt like they were my children and that nothing should happen to them. We did this because we all should act humanely and help those in need. What more can I say?” he said.

Gokalpuri saw some of the worst violence in the three days of rioting, which has left almost 40 people dead. Head constable Ratan Lal died of a bullet injury that he sustained here. Muslim shops, houses and a mosque were torched and looted here. The Muslims who fled are yet to return.

The “sardars” are now famous among the Muslims of Kardampuri, where HuffPost India heard about them.

Their story offers a rare heartwarming tale in a grieving city torn apart by the riots. For Singh, who was 13 years old when the horrific anti-Sikh riots swept through the city, the violence last weekend was a grisly reminder of the past. His incredible bravery offers hope that not all is lost at a time when India seems more divided than ever before.

“I have lived through the hell that was 1984,” Singh said. “Those memories have been revived.”

There were very few shops open in Gokalpuri market on 27 February, five days after Bharatiya Janata Party (BJP) leader Kapil Mishra made a hate speech against people protesting the Citizenship Amendment Act (CAA), which is now regarded as the trigger for the violence.

Singh had opened his electronic store for the first time since the riots on 27 February.

Smiling at this reporter’s repeated queries about what motivated him and his son to make so many trips to save his neighbors, Singh said, “You have to understand that this is the belief and culture of our community. You may have heard the expression: nanak naam chardi kala, tere bahne sarbat da bhala. Sarbat da bhala means that we want everyone to prosper. We did this to honour humanity and our 10 gurus whose central message is that we should act for everyone to prosper.”

It was around five in the evening on 24 February when tensions spiked in Gokalpuri, Singh said, giving a blow-by-blow account of what happened in his neighborhood that evening.

It started with people chanting Jai Shri Ram, and raising slogans in praise of Prime Minister Narendra Modi and calling for “traitors” to be shot, said Singh. Their numbers swelled quickly. The Muslims of Gokalpuri panicked and gathered at their local mosque — the Jamia Arabia Madinatul Uloom mosque — that would be set on fire and looted later that night.

After the meeting, the Muslims decided they would leave immediately. Singh said he offered them protection and asked them to consider staying back, but they told him the people who wanted to harm them were likely to be more than those willing risk their own lives to save them.

The Muslims of Gokalpuri were terrified they would not be able to make it past Hindu mob that had commandeered the main road outside the locality.

That is when Singh and his son stepped in, offering to ferry 60 to 80 of them to the closest Muslim locality.

Given how quickly the situation was worsening, father and son decided there was no time to get their car from the parking lot. They would have to make do with their motorcycle and scooty.

“We don’t think we did anyone a favour,” said Singh. “We didn’t do it for praise or for thanks. We did it because it was the right thing to do.”

A menace to society


When Singh returned to Gokalpuri after dropping off his Muslim neighbours to Kardampuri, a full-blown riot was underaway.

He tried stopping the rioters from burning down a shop of a Muslim that was just one shop down from his, but they did not listen to him.

Worried that a gas cylinder would catch fire and blow up the whole street, Singh used that the submersible pump in the community centre across the street to put out the fire.

The shops and homes of Muslims in Gokalpuri were looted and torched over two days.

“Any kind of kattarpanti (extreme views) is never good,” said Singh. “The violence we are seeing today is a result of kattarpanti.”

When this reporter asked Singh about the identity of the rioters he had asked not to engage in arson, he said, “They were outsiders.”

Blaming the violence on “outsiders,” is a commonplace response from victims and eyewitnesses of communal violence, especially if they plan to continue living in that location.

It was clear, however, that Singh was not satisfied with his own answer.

When this reporter probed further, Singh said that he believed the rioters included people affiliated “with a certain party,” and outsiders.

“They were shouting pro-Modi slogans,” is all he said.

Later, while perusing the wreckage of the looting and torching, this reporter asked Singh how would “outsiders” know exactly which shops to target.

He replied, “They would not know. So, you have your answer.”

Not everyone is happy

The image of him hosing down a Muslim shop is one that is not well received in the larger community, Singh feels.

The day before this reporter met Singh he had cleared his shop just in case he was targeted. He feels insecure even though he has lived in Gokalpuri for 40 years and is president of its Market Association.

Singh says he has heard people whisper that he did not do the right thing by saving the Muslims.

“We got in the way of their plans of looting and burning. We are afraid that we could be targeted next,” he said. “We were afraid that something might happen to us.”

Even as Singh shared how wary he is of the prevailing situation, a man came running up to the shop and said that he had heard about firing at Ganga Vihar, the locality next to Gokalpuri.

“Well, if rogues are going to stand around in groups then the police will fire,” Singh replied calmly. “Who was it? The police? The rioters? Or was it just a tire exploding? Go find out. I will make calls too.”

Whether the information was true or not did not matter. The handful of shops that had opened earlier in the day closed their shutters.

Singh brought down his shutter half way and asked the shop boy to “keep the handle on the shutter.”

“If the market opens soon, people will get busy with life and the tensions will ebb away,” he said.

At this reporter’s request, Singh retraced the route he and his son took to Karadampuri to avoid being spotted by the Hindu rioters who had commandeered the road.

Singh smiled but said nothing.

As a few more people gathered to see him, the Sikh man smiled at them before starting up his scooty and riding away.