Says the incide­nt seems to be a remind­er to Muslim­s of the Babri Masjid episod­e
By News Desk
Published: February 26, 2020
Tweet Email 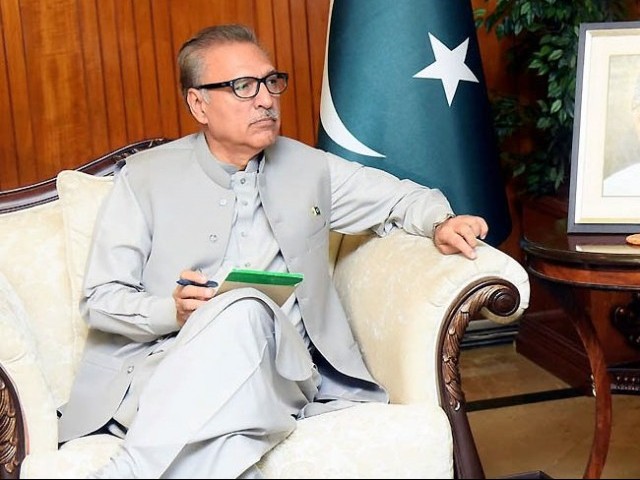 President Arif Alvi has condemned the desecration of mosques in the Indian capital by ‘fascist Hindutva followers’, asking the secular forces to rise against such barbaric actions.

“Another update of the disgraceful act, vandalising a mosque!” the president said in a tweet posted hours earlier. “It seems to be a reminder to Muslims of the Babri Masjid episode.”

Another update of the disgraceful act. Vandalising a mosque! It seems to be a reminder to Muslims of the Babri Masjid episode. I think secular forces within India should rise against such barbaric actions. https://t.co/j8eLlCheTH

He further questioned the world’s ignorance over ‘this serious degradation of India’, saying that the Indian government is ‘surely moving towards genocide’.

“Stop this,” Alvi stressed. “Modi’s RSS/BJP Hindutva fascists are on a rampage against minorities particularly Muslims destroying their mosques, killing innocent people and burning their homes.”

How long can world ignore this serious degradation of India? Modi's RSS/BJP Hindutva fascists are on a rampage against minorities particulalry muslims, destroying their mosques, killing innocent people & burning their homes. India is surely moving towards a genocide. STOP THIS https://t.co/NgulAtw3Dl

At least 19 people have been killed in the Indian capital during clashes between opposing protesters over a new citizenship law, a senior hospital official told Reuters on Wednesday, even as an eerie calm descended on some riot-torn areas of New Delhi.

“There are 15 patients in critical condition,” the hospital official from the Guru Teg Bahadur Hospital told Reuters, adding that a total of 19 people had now died at the facility.

The clashes, which coincided with a visit to India by US President Donald Trump, erupted early this week between thousands demonstrating for and against the new citizenship law introduced by Prime Minister Narendra Modi’s Hindu nationalist led government.

Critics say the law is biased against Muslims and undermines India’s secular constitution.