Top army genera­ls differ over the cause of the plane crash that killed the countr­y’s presid­ent 32 years ago
By Anadolu Agency
Published: February 25, 2020
Tweet Email 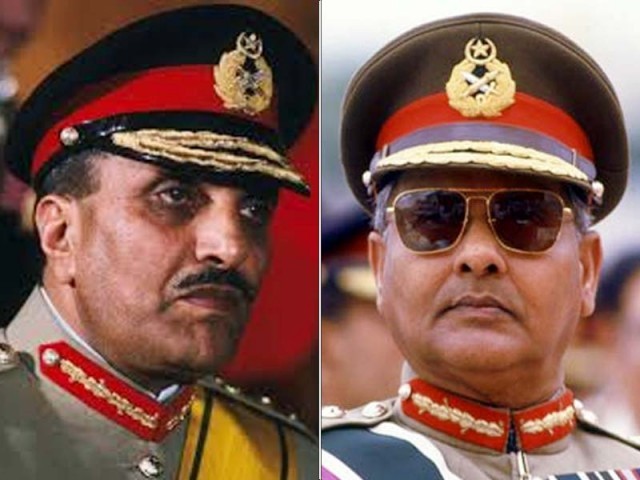 KARACHI: Denying their hand in the killing of former Pakistan military ruler General Ziaul Haq, two former generals of the Pakistan army have drawn divergent conclusions on the reasons behind the plane crash.

The crash killed the country’s president along with five military officers and the US Ambassador Arnold Lewis Raphel.

Beg said he had pressed several times for a proper inquiry during his tenure as army chief. But the government did not pay attention to his requests.

“It was not an accident but sabotage. All indications are pointing towards that,” he told Anadolu Agency.

But Durrani, who was heading the Multan division that hosted Ziaul Haq to watch the trial of American tanks in deserts of Bahawalpur, said he did not believe in the sabotage theory.

Both these generals appeared divided over whether the crash was an “accident” or a “sabotage”.

Durrani insisted that the plane crash was simply an accident, resulting from a “technical fault”.

On Ijazul Haq’s allegations about his role in the conspiracy, the former army chief Beg said he did not feel fit to respond to them. He also reminded that he had played a role in the smooth transition of power to a civilian government.

“I was the one who held the elections, and handed over the country’s reigns to a democratic government instead of imposing martial law,” Beg said referring to November 1988 general elections, which were held just three months after Ziaul Haq’s death.

“If I were involved in any conspiracy then how did it benefit me?” he asked.

“I did not impose the martial law despite pressure [from within the army]. I did not even accept extension in my tenure as the army chief. Then, why would I be involved in a conspiracy, which did not benefit me in any way,” he said.

He, however, said he had strong reasons to believe in the involvement of the Central Investigation Agency (CIA) of the US

Referring to the death of US envoy also in the crash, he said the CIA is used to find a scapegoat to hide behind.

Beg further mentioned that an internal inquiry conducted by the military intelligence during his tenure had also raised suspicion about the role of CIA. But he refused to part further details of the internal inquiry.

But Durrani disagreed with the Beg’s conclusion. He described the entire conspiracy theory as “childish”.

Ijazul Haq in his interview had stated that there was evidence that mango crates loaded on the plane carried explosives. He also claimed that nerve gas was also pumped into the cabin to maim pilots, besides a projective also from outside, to leave nothing to chance.

Durrani said, all these theories have been cooked up. “My theory has no fun or gossip. But the reality is that it was purely a technical error, which led to that unfortunate accident,” he told Anadolu Agency.

“It was not the first time the C-130 had developed a technical error. I remember it [C-130] had twice developed technical faults at Karachi and Chitral [northwestern tourist resort] airports, months before the crash. And, I had accompanied him [Ziaul Haq] on both occasions,” he said.

Describing Ijazul Haq’s allegations baseless, Durrani, who served in the army from 1961-1998 said it was not possible to force the president, who was also army chief to inspect the field trial of tanks.

“Ziaul Haq was not a kid, he was the president and the army chief. How could I force or lure him to go where he did not want to,” said Durrani, who also served as the country’s National Security Adviser from May 2008 to January 2009.

Ijazul Haq also claimed that Durrani had called 16 times to convince his father to fly to Bahawalpur.

“It was purely Gen Zia’s [Ziaul Haq] decision to witness field trials of tanks. It had been decided in a meeting of the corps commanders. It is very much on record,” he said.

He also refused allegation that he had called Ziaul Haq 16 times.

“This is a lie. I had called him only twice a few days before he visited Bahawalpur,” he added.

Charging Ijazul Haq for playing politics, Durrani said: “If he (Ijazul Haq) were serious, he would have pressed for the investigation of his choice.”