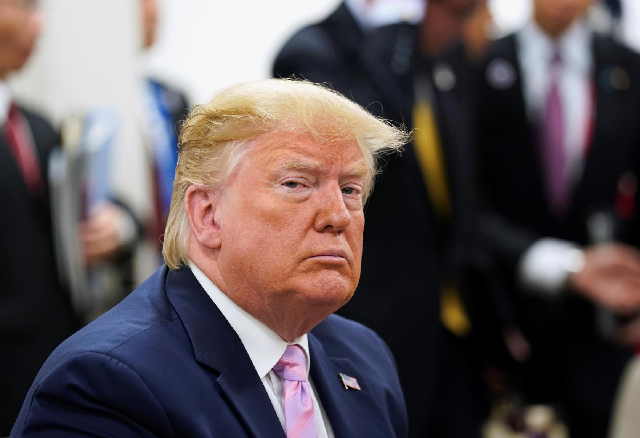 United States President Donald Trump will likely urge India to maintain peace along the Line of Control (LoC) in Kashmir and reduce the tensions with nuclear-armed rival Pakistan, reported APP.

Trump arrives in New Delhi early Monday for a two-day visit that aims to boost strategic partnership between the two nations.  In his maiden trip to the country, US president and wife Melania will travel to Narendra Modi’s home state of Gujarat to attend an event at a stadium along the lines of the “Howdy Modi” extravaganza held in Houston last September during which the two leaders made a joint appearance.

Briefing the media about the trip, a senior Trump administration official said the president would encourage a reduction in tensions and urge bilateral dialogue between Islamabad and New Delhi.

“I think the President will urge both countries to seek to maintain peace and stability along the line of control and refrain from actions or statements that could increase tensions in the region.”

When asked if Trump would offer to mediate over Kashmir conflict, the official said: “I think what you’ll hear from the President is very much encouraging a reduction in tensions between India and Pakistan, encouraging the two countries to engage in bilateral dialogue with each other to resolve their differences.”

An air strike by Indian warplanes inside Pakistan in February 2019, and a subsequent retaliatory attack by the Pakistani air force, pushed the nuclear-armed neighbors to the brink of another war.

The Indo-Pak tensions escalated when the Hindu nationalist government stripped the occupied Himalayan region of semi-autonomy in August 2019, jailed its political leadership and imposed a communications blackout.

Although the United Nations and Trump himself has offered to mediate on the Kashmir issue, India has rejected the offers stressing that the issue is bilateral.

The president would also raise US concerns over the military lockdown in the Indian Occupied Jammu and Kashmir region as well as minority rights in the South Asian country.

Modi’s government has faced large scale-protests at home and criticism abroad for enacting a citizenship law that is seen as discriminating against Muslims and has deepened concerns his administration in undermining India’s secular traditions.

Trump will talk about the two countries’ shared traditions of democracy and religious freedom, the senior administration official said in a conference call on Friday ahead of the two-trip.

“He will raise these issues, particularly the religious freedom issue, which is extremely important to this administration,” the official said.

(With additional input from Reuters.)