Despit­e losing a hand in the line of duty, Alamza­ib Khan contin­ues his endeav­our to keep crimin­als at bay
By Ahtisham Khan
Published: February 23, 2020
Tweet Email 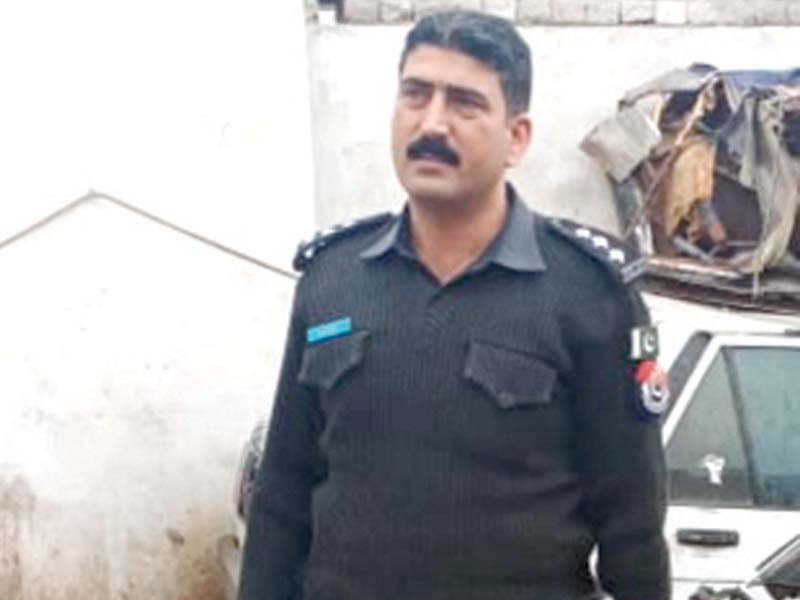 PESHAWAR: In the words of Christopher Reeve, a hero is an ordinary individual who finds the strength to persevere and endure in spite of overwhelming obstacles.

This is exactly the case of Alamzaib Khan, a police officer from K-P who, despite becoming disabled during a terrorist operation, has continued to serve the police force with utmost passion and dedication.

Alamzaib, who serves as the deputy superintendent of police (DSP) at the Faqeerabad Police Station in Peshawar, lost one of his hands in a terrorist attack in Akora Khattak eight years ago.

He was trying to stop a suicide bomber when the latter detonated his grenade vest. The brave officer not only lost his hand but the incident also caused several other injuries, so much so that he remained under treatment for four months at the Combined Military Hospital (CMH) Nowshera and the Doctor Hospital in Lahore.

Even though several police officers embraced martyrdom while fighting the war against terrorism, chivalrous officers like Alamzaib Khan become a source of pride for Khyber-Pakhtunkhwa (K-P) police by not retreating from the battlefield and defeating the terrorists, even if it cost them physical disabilities for life.

After his recovery, Alamzaib rejoined the police force with renewed passion and dedication and was deployed as the Station House Officer (SHO) in Nowshera. Later, he was posted as an SHO in Charsadda before being promoted to the position of DSP operations in Tank, where he has been actively engaged in operations against the terrorists. Besides, he has also served the K-P police in Dera Ismail Khan.

In December 2019, he was posted as the DSP of Faqeerabad in Peshawar, where he continues to take part in search and strike operations.

Speaking to The Express Tribune, Alamzaib Khan said that he takes pride in being part of the police force and serving the country, adding that he has never considered his disability to be an impediment.

“The police force comprises brave officers who are not afraid to lay down their lives to defend their country,” he said. “It’s not easy for me to perform my duties — especially carrying out operations — with only one hand, but I take pride in my efforts.”

Even though Alamzaib risked his life while trying to stop the suicide bomber, he did not receive any recognition or awards for his bravery despite a lapse of eight years. No government official has recognised his relentless services even on days like March 23 and August 14 when many unsung heroes are remembered.

“I performed my duties sincerely and did not do it for awards, however, a national-level recognition would increase the morale of other police officers and motivate them to give their cent per cent to eve ry task,” he said.