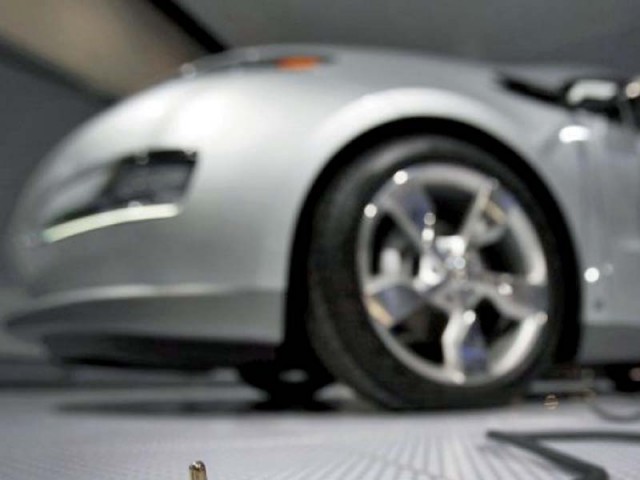 Some investors are awaiting the notification of the electric vehicle policy so they could start importing the vehicles while some others are planning to set up local production plants. PHOTO: FILE

KARACHI: Another Pakistani automobile company has ventured into the electric vehicle segment despite the delay in issuing a relevant notification by the government.

The Crown Group on Friday organised market testing and sales display of its three and four-wheel electric vehicles.

According to Crown Group Chairman Muhammad Farhan Hanif, the new additions will enable users to drive one kilometer for only Rs1.25.

The vehicles will be manufactured at the group’s newly built 26-acre facility at Port Qasim, which has an initial production capacity of 120,000 units per annum. “The group has invested Rs2 billion in the plant in the first phase,” the official revealed.

Based on yet-to-be-implemented electric vehicle policy, which will restrict customs duty on completely knocked down (CKD) parts to 1% and sales tax to 5%, the company has set the display and testing price of four-wheel electric cars at Rs400,000.

On the other hand, the display and testing price for three-wheel rickshaw and two-wheel scooty has been set at Rs300,000 and Rs55,000 respectively.

Crown is a known brand in the two and three-wheeler segment in Pakistan’s auto sector and exports to the international market as well.

Earlier in November 2019, the Pakistan Tehreek-e-Insaf (PTI) government approved the electrical vehicle policy in an effort to tackle global warming and open avenues of affordable transportation for the people.

Currently, the car ownership rate in Pakistan stands at 18 out of 1,000 people.

Existing cars in the country are very far from the purchasing power of the common man. Moreover, they are not climate-friendly as they run on fossil fuels.

Following the discussion in the cabinet, the policy was approved but a notification in this regard has not been issued.

Some investors are awaiting the notification so they could start importing the vehicles while some others are planning to set up local production plants.

The electric vehicle policy has been designed to attract investors by providing incentives such as a reduction in taxes from 43% to 11.25%.

“Electric vehicles are climate-friendly as well as cost-effective,” said JS Global analyst Ahmed Lakhani. “Vehicle fuel has a significant share in Pakistan’s imports, of around 25%, which can be saved if the government’s plan is implemented.”

According to a study conducted by the National Transmission and Despatch Company (NTDC), the government plans to establish 120 new power projects by 2040 in a bid to add 74,448 megawatts of production capacity to the system.

Most of this capacity will come from hydel, domestic coal and renewable sources including wind and solar.

In the year 2040, Pakistan’s energy demand is projected at 80,425MW while supply will stand at 98,091MW after the addition, according to the NTDC.