It’s official: US, Taliban to sign peace accord on February 29

It’s official: US, Taliban to sign peace accord on February 29

Two sides will reduce violen­ce for a week before signin­g ceremo­ny
By Our Correspondent
Published: February 21, 2020
Tweet Email 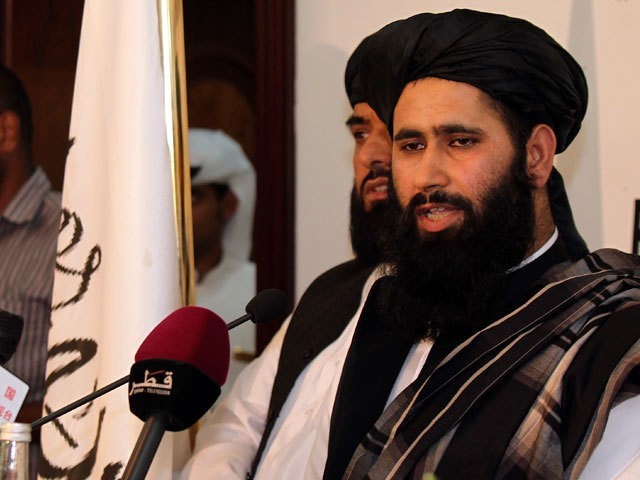 After 18 months of talk, two sides will sign accord on Feb 29, says Taliban spokesperson. PHOTO: AFP/FILE

KARACHI: The Afghan Taliban and the United States will sign the much-awaited peace agreement in the presence of international observers on February 29, the group announced on Friday ending a media guessing game about the outcome of protracted negotiations between the two sides.

“Following lengthy negotiations between the Islamic Emirate of Afghanistan and the United States of America, both parties agreed to sign the finalised accord in the presence of international observers on … 29th of February 2020,” the Taliban spokesperson, Zabihullah Mujahid, said in a statement emailed to The Express Tribune.

Earlier in the day, Secretary of State Mike Pompeo also announced that the US is preparing to sign the deal with the Taliban on Feb 29. “Upon a successful implementation of this [reduction is violence] understanding, signing of the US-Taliban agreement is expected to move forward,” he said in a statement.

US says preparing to sign deal with Taliban on February 29

The Taliban spokesperson added that the two sides would create a “suitable security environment” before the signing date, and extend invitations to senior representatives of “numerous countries and organisations” to attend the ceremony. However, he didn’t say where the signing would take place.

Zabihullah wouldn’t explain “suitable security environment”, but an Afghan government official claims it means all three sides – the Taliban, the US troops, and the Afghan forces – would scale down violence. “The reduction in violence will start from 22 February and will last for one week,” National Security Council spokesperson Javed Faisal told AFP.

The Taliban spokesperson said the two sides would also make arrangements for prisoners’ swap, chalk out modalities of intra-Afghan negotiations, and lay the groundwork for peace across the country with the withdrawal of all foreign forces from Afghanistan.

Zabihullah reaffirmed the Taliban’s commitment that the Afghan soil would not be used against the security of others “so that our people can live a peaceful and prosperous life under the shade of an Islamic system”.

The announcement came a day after Taliban deputy chief Sirajuddin Haqqani penned an opinion piece in America’s New York Times newspaper in which he gave a brief overview of the peace process while outlining his group’s vision for a postwar Afghanistan.

“We stuck with the [peace] talks despite recurring disquiet and upset within our ranks over the intensified bombing campaign against our villages by the United States and the flip-flopping and ever-moving goalposts of the American side,” he wrote.

Sirajuddin Haqqani, who was designated by the US State Department a “Specially Designated Global Terrorist” in 2008 and carries up to $10 million bounty on his head, gave several assurances in an effort to assuage the concerns of the Western countries.

If the deal comes through, it would end the 18-year-long war in Afghanistan in which tens of thousands of people have died. It has arguably been dubbed the longest, deadliest and costliest war in US history.

The US and the Taliban have been tantalisingly close to a deal before, only to see President Donald Trump nix it in September at the 11th hour amid continued violence in Afghanistan.