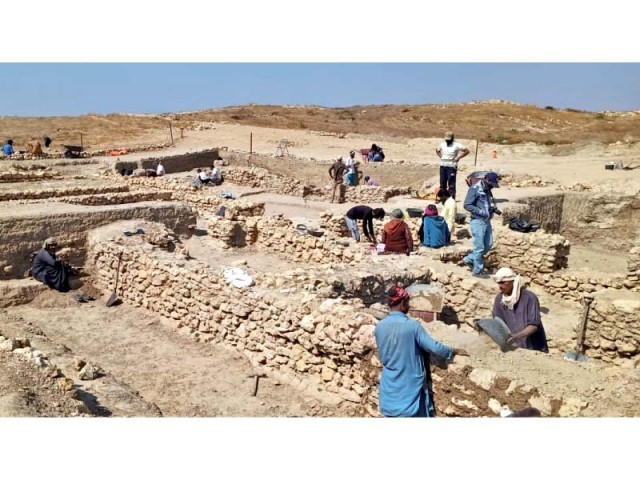 Excavations are being carried out at the historic city of Bhanbhore, which dates back to the first century BCE. PHOTO: EXPRESS

KARACHI: Carrying out excavations at Bhanbhore, archaeologists revealed on Wednesday that the ancient city was possibly the world’s largest ivory producing site.

According to Mantelini, while similar objects had also been found from historical sites in Iraq, he believed that the sheer number of ivory artefacts dug up from Bhanbhore made it the world’s largest ivory-producing site.

He stated that the mission, assisted by university students, had carried out excavations on the north side of Bhanbhore on January 29, discovering thousands of historical artefacts, including beads, coins, bronze, copper, glass, iron, moulds, shells, wood, fired bricks and mud bricks.

Congratulating the experts on their findings, Shah said it was a great moment for him and his department, adding that they would extend all possible support to the mission involved in the Bhanbhore excavation. He announced that more job opportunities would be announced for curators and conservators as well, so that students were able to progress in the field.

Sharing details about his conversation with President Dr Arif Alvi, the minister said that Alvi had asked him why people were not taking any interest in archaeology. “Because the government itself has not shown any interest in it in the last 70 years,” responded Shah.

He pointed out that archaeology was not included as part of education curricula. “How will children know about our history?”

Shah further said that another team of archaeologists from France was working at Chahunjo Daro, located in Sakrand, adding that excavations would also be initiated at two more sites near Larkana and Umerkot.

Located to the east of Karachi, Bhanbhore is a historical city dating to the first century BCE. Some archaeologists and historians suggest it is the historical city of Debal, conquered by Arab general Muhammad bin Qasim in 711-712 after defeating Raja Dahir, the last Hindu ruler of Sindh. However, this has not been confirmed, despite much excavation and research being carried out to attempt to verify the link.

In 2004, the government submitted the site for consideration as a UNESCO World Heritage Sites. It is currently in the tentative list.

Preliminary excavations in the area were first done by Ramesh Chandra Majumdar in 1928, and then by Leslie Alcock in 1951. Pakistani archaeologist Dr FA Khan later conducted extensive studies and excavations in the site between 1958 to 1965.