US Secret­ary of State's three-day visit to kingdo­m comes in wake of a US-ordere­d drone strike that killed Soleim­ani
By AFP
Published: February 20, 2020
Tweet Email 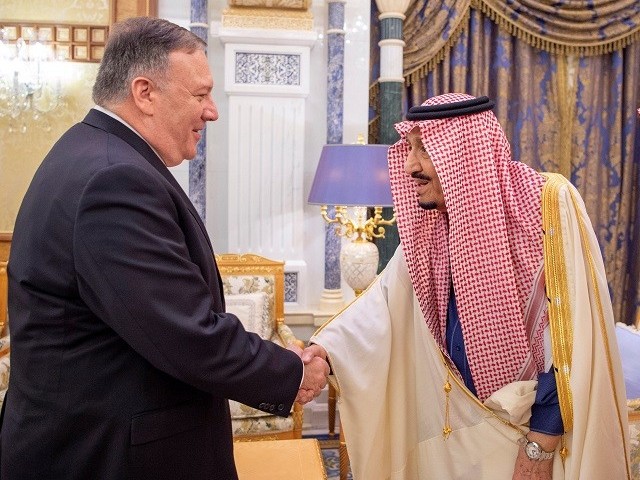 US Secretary of State's three-day visit to kingdom comes in wake of a US-ordered drone strike that killed Soleimani. PHOTO: REUTERS

RIYADH: US Secretary of State Mike Pompeo visited American troops in Saudi Arabia on Thursday after talks with King Salman on the second day of a visit focused on countering Iran.

The United States began building up its military presence at the Prince Sultan air base, south of Riyadh, last year following a series of attacks in the Gulf that Washington and Riyadh have blamed on their common foe Iran.

“Pompeo’s visit to Prince Sultan air base and a nearby US Patriot battery highlights the long-standing US-Saudi security relationship and reaffirms America’s determination to stand with Saudi Arabia in the face of Iranian malign behaviour,” the State Department said in a statement.

“In response to the attacks and at the request of Saudi Arabia, the United States deployed missile defence, and fighter jets on a defensive mission to deter and protect against any future attacks.”

Pompeo’s three-day visit to close ally Saudi Arabia comes in the wake of a US-ordered drone strike that killed Qasem Soleimani, Iran’s most powerful general, as he visited Baghdad on January 3.

Regional tensions rose due to the killing and Iran responded with missile strikes on US forces in Iraq.

US President Donald Trump and his oil-rich ally Riyadh have accused Iran of attacking tankers in the Gulf and Saudi oil installations, incidents which roiled global energy markets last year.

Tehran denies involvement in the attacks and Riyadh has since appeared keen to engage in cautious diplomacy to ease friction.
Before visiting the air base, Pompeo held talks with King Salman in Riyadh.

Pompeo faces a tough balancing act in Saudi Arabia as he said he would also discuss “human rights” alongside economic issues during his visit.