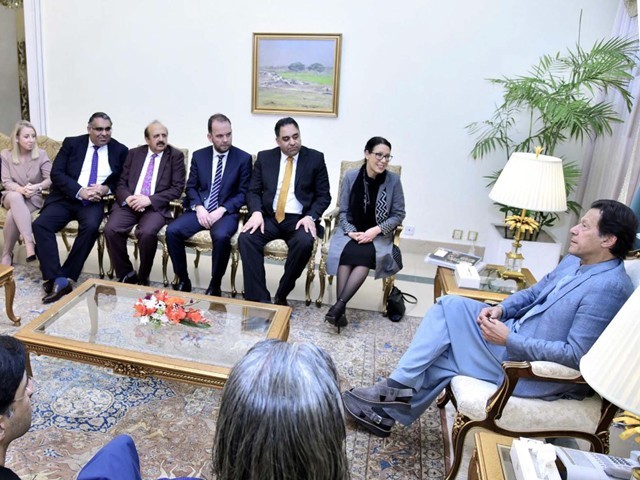 ISLAMABAD: A bipartisan panel of the British Parliament was impressed with Pakistan’s “openness and progressive approach” on the longstanding dispute over Himalayan valley of Kashmir and hoped that India would take the cue from its estranged neighbour.

The remarks came from Debbie Abrahams, head of the All Party Parliamentary Kashmir Group (APPKG) of the British Parliament, who along with other members of the cross-party group is currently on a visit to Pakistan. The group on Wednesday held talks with Foreign Minister Shah Mehmood Qureshi and also met Prime Minister Imran Khan.

Debbie was in the headlines earlier this week when she along with other British MPs were deported by India despite having valid visas. They were denied entry apparently because of their critical views on Indian government’s handling of the Kashmir situation.

The bipartisan panel has been quiet vocal about the human rights situation in Kashmir which has been facing a continuous lockdown since August 5, 2019 when New Delhi illegally annexed the Indian Occupied Kashmir (IOK) by abrogating its special status.
Unlike, India, Pakistan warmly welcomed the British MPs and facilitated their visit.

After meeting the foreign minister, the chairperson of the group held joint news conference with Qureshi and was all praise for Pakistan’s “openness and progressive’ approach on Kashmir.

Debbie said she was grateful to the foreign minister for ‘open and frank’ discussions on the Kashmir dispute. She said the members of the delegation asked specific questions related to the situation in Azad Kashmir and the foreign minister and other officials candidly responded.

“I think it shows the openness and the progressive approach that has been taken by Pakistan on this issue (Kashmir) and I hope India will reciprocate as well,” she added. The members of the delegation are scheduled to travel to Azad Kashmir to get the firsthand account of the ground situation.

“We consist of parliamentarians from all political parties who are keenly interested in issues that the Kashmiri people are facing now and have done over several decades particularly the issues that have been faced after since August last year [when India annex occupied Kashmir].

“Our focus has been over the last couple of years since I have been chair of this group on human rights violations on both sides of the Line of Control (LoC).” The LoC is the defecto border that divides the disputed Himalayan valley between Pakistan and India.

Debbie said the group sought to visit both parts of Kashmir. While Pakistan had granted them the permission, the response from the Indian side was not positive.

“We sought to come to visit Pakistan and Azad Kashmir, so that we could understand more detail about what was happening [and] to speak with people there and officials but also to say real people to get their experiences.

“We also sought to visit India and [occupied] Jammu and Kashmir. Unfortunately that hasn’t happened but hopefully in the future it will.
“When we were planning this trip, we wanted to make sure that the delegation visited both India and Jammu & Kashmir and had access in the same way we have been facilitated by the Pakistani government,” she said.

Debbie hoped that India would take the opportunity to reflect on Pakistan’s approach to addressing the issues. She dismissed criticism that the she and other members of the group had any partisan approach. “We are an independent group. We are not anti-India or pro-Pakistan, we are pro-human rights.”

To a question about the inaction by the international community and the UK over the Kashmir situation, the UK lawmaker dismissed the criticism, saying she and other members of the group only recently took up the issue with British foreign secretary.

She said what is going on in the Indian Occupied Kashmir had not gone unnoticed.

“We hope in addition to what we are doing through our government, the international community as a whole will realize that human rights is a priority and that priorities are not just about trade” she said.

In his remarks, Foreign Minister Qureshi thanked the delegation for visiting Pakistan and taking interest in the ongoing situation in Kashmir. Qureshi made it clear that Kashmir is not an internal matter of India.

He referred to the recent statement by UN Secretary General in which he said UN Security Council resolutions on Kashmir are still relevant. “The UN chief also endorsed Pakistan’s view that Kashmir is an internationally recognized dispute,” Qureshi added.

The foreign minister appreciated the group’s consistent focus on the Jammu & Kashmir dispute and the deteriorating human rights and humanitarian situation, with 8 million Kashmiris under an inhuman lockdown and communication blockade since 5 August 2019.

He lauded the impact of the APPKG’s report on Jammu and Kashmir issued in November 2018 and noted that, together with the two reports issued by the Office of UN High Commissioner for Human Rights (OHCHR) in June 2018 and July 2019, it had helped raise international awareness about the human rights situation in the occupied valley in an unprecedented manner.

The foreign minister also lauded the role of parliaments in key countries, international human rights and civil society groups, and international media in highlighting the plight of the Kashmiris and raising their voices against the atrocities being perpetrated in the IOJ&K.

He said a lasting solution to Kashmir dispute is essential for durable peace and stability in South Asia. India’s refusal to peacefully resolve the Jammu & Kashmir dispute and persistent denial of Kashmiris’ right of self-determination continues to endanger regional as well as international peace and security.

The foreign minister urged the parliamentarians to continue playing their part in the British Parliament as well as internationally to highlight the Jammu & Kashmir dispute as the Kashmiri people had high hopes and expectations from them.

The group also met Prime Minister Imran Khan, who stressed that Pakistan believes that a just and lasting solution of the Kashmir dispute is essential for peace, security and stability in South Asia.

The prime minister highlighted the threat to peace and security posed by the Indian leadership’s belligerent rhetoric and aggressive actions on the ground. He also warned that India could carry out “false flag operation” to divert international attention from the longstanding Kashmir dispute.