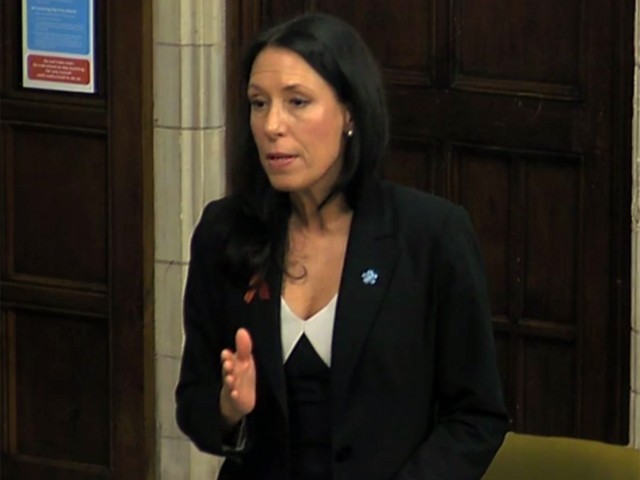 Indian immigration officials did not cite any reason for refusing Debbie Abrahams entry and revoking her visa. SCREENGRAB/FILE

KARACHI: A British lawmaker, known for raising voice for the oppressed people of Indian Occupied Jammu and Kashmir (IOJ&K), was deported from India after landing at New Delhi’s Indira Gandhi International Airport on Monday.

MP Debbie Abrahams, a Labour Party lawmaker who chairs a parliamentary group focused on Kashmir – All Party Parliamentary Group for Kashmir (APPG), was unable to clear customs after her valid Indian visa was rejected, according to an official statement issued by her United Kingdom office.

The immigration officials did not cite any reason for refusing Abrahams entry and revoking her visa, a copy of which, valid until October 2020, she shared with the media.

The UK lawmaker has been critical of the Indian government’s move to revoke semi-autonomous status of the occupied valley.

In response to some of the comments I was planning to visit Indian family in Dehli accompanied by my Indian aide. I became a politician to promote social justice & human rights FOR ALL. I will continue to challenge my own Government & others while injustice & abuse is unchecked https://t.co/YvCOPDmfeB

On arriving at the New Delhi airport on an Emirates flight from Dubai at around 8:50am, she was told that the e-visa that had been issued last October, and was valid until October 2020, had been rejected.

Abrahams, the British MP for Oldham East and Saddleworth, commenting on what happened said: “Along with everyone else, I presented myself at the immigration desk with my documents including my e-visa, had my photograph taken and then the official looked at his screen and started shaking his head.

“Then he told me my visa was rejected, took my passport, and disappeared for about 10 minutes … when he came back he was very rude and aggressive shouting at me to ‘come with me’. I told him not to speak to me like that and was then taken to a cordoned off area marked as a Deportee Cell.

“He then ordered me to sit down and I refused. I didn’t know what they might do or where else they may take me, so I wanted people to see me.

“He disappeared again when I rang my sister-in-law’s cousin, Kai, who I was meant to be staying with. Kai got in touch with the British High Commission and he tried to find out what was going on.

“After lots of different immigration officials came to me, I tried to establish why the visa had been revoked and if I could get a ‘visa on arrival’ but no-one seemed to know.

“Even the person who seemed to be in charge said he didn’t know and was really sorry about what had happened. So now I am just waiting to be deported, unless the Indian Government has a change of heart.”

The Indian officials then took her passport and physically marched her to the plane.

The UK lawmaker has been critical of the Indian government’s move to revoke semi-autonomous status of occupied Jammu and Kashmir pic.twitter.com/FObdDEBkn5