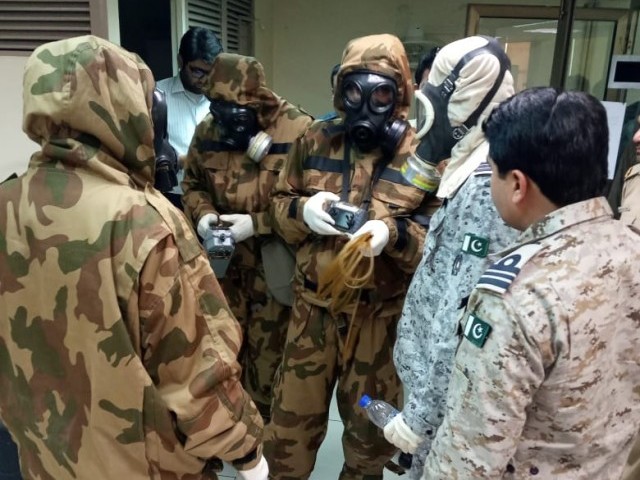 KARACHI: Chemical and nuclear specialists from the armed forces arrived at the Keamari locality of the port city on Tuesday as the death toll from the as yet unidentified gas leak climbed to 14.

The specialists will investigate the reported gas leak and determine the source of the deadly agent which has taken a toll on area residents over the last three days.

District Health Officer Dr Zafar Mehdi confirmed the latest death toll. A spokesperson from the provincial health department added that over 150 people have been affected during the past three days.

The most affected neighbourhoods in the locality are Bhutta village, Jackson Market, Tara Chand road and GR Railway Colony. 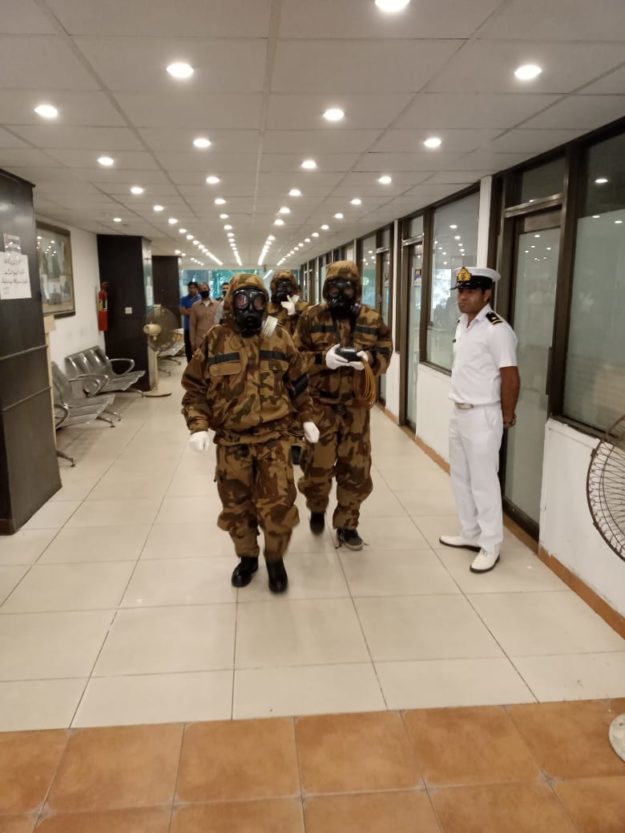 The area residents, protesting administrative negligence, also blocked the road near gate 5 of KPT. The protestors are demanding the resignation of the maritime affairs minister and chairman of Karachi Port Trust (KPT).

They are also asking for Rs10 million in compensation for each death and a job for next of kin.

Due to the protest, the route heading towards KPT is facing severe traffic congestion and surrounding roads are also affected.

The provincial government has yet to establish any information or medical camps in the locality.

A number of households in the affected area have evacuated on self-help basis and moved to residences of their relatives. Schools in the area have also been closed until further notice.

Hospitals within Karachi’s district South have been put on alert by the provincial government to deal with an influx of casualties if need be.

‘Residents need to be evacuated from Keamari’

Sindh Chief Minister Murad Ali Shah has also ordered an evacuation of the locality. The decision was taken during a Monday night meeting.

In another meeting with concerned officials on Tuesday, the provincial chief executive expressed his displeasure over the delay in evacuating area residents.

“It is a pity to see that the evacuation has not started yet,” CM Murad said and added that people were being affected by the gas leak as the wind direction was changing.

“Residents need to be evacuated from Keamari,” the chief minister stressed.

He also stressed on the need to find the source of the gas leak – authorities and concerned departments have spent a better part of three days to ascertain the cause of the leak without any success.

Briefing the chief minister, Karachi’s commissioner maintained that the foul smell was emitting from a container, loaded with soybean, at the Karachi Port Trust.

He claimed that a reduction in the smell was witnessed when it was sealed shut.

The chief minister also ordered an inquiry into the incident and ordered the investigation of the container.

The vice-chairman of the local union council, Asif Khan, told The Express Tribune that people in the area were still reporting difficulty in breathing. Local teacher Asif Shah claimed that the foul smell reduces during daylight hours and increases “manifolds at night”.

Dr Jamali added that a patient had severe breathing issues and was placed on a ventilator while some other patients were discharged after treatment.

“We need to evacuate people to a safer place,” she stressed.

Minister for Maritime Affairs Ali Zaidi said the federal government will provide all possible help to the people affected by the incident.

“Various teams are investigating the cause of the incident,” he reiterated.