Aviati­on indust­ry has pledge­d to reduce its net carbon emissi­ons by 50 per cent by 2050
By AFP
Published: February 16, 2020
Tweet Email 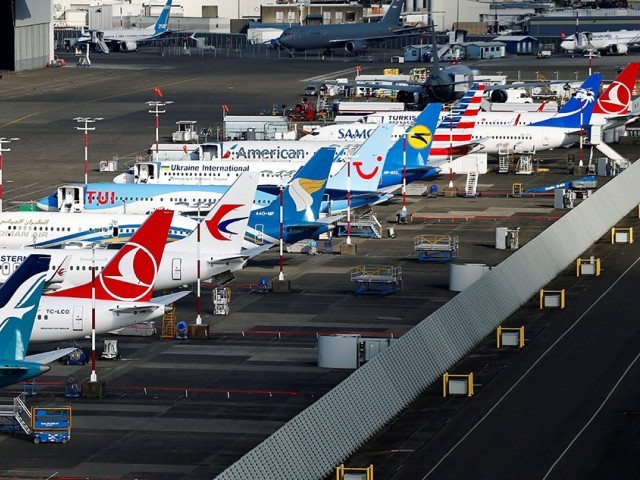 SINGAPORE: From an emissions-reducing model jet that looks like something from a sci-fi movie to electric aircraft and sustainable fuel, the aviation industry is ramping up efforts to go green as consumer pressure grows.

In an era when teen climate activist Greta Thunberg opts to travel on an eco-friendly boat and “flight-shaming” is all the rage in her native Sweden, air travel’s reputation has never looked as dire.

Aviation accounts for three per cent of climate-damaging carbon emissions globally, according to the European Environment Agency, and the world is experiencing record heatwaves, wildfires and storm surges made worse by rising seas.

“Sustainability” was the buzzword last week in Singapore at Asia’s biggest air show — which was powered by solar panels — with manufacturers and airlines trying to outdo one another on vows to become more sustainable.

Some environmentalists, however, have criticised such pledges as “greenwash”, PR stunts that will do little to mitigate the damage caused by the vast quantities of jet fuel burnt every year.

Airlines are “working with us to find pathways to increase the availability of sustainable fuels, look at how electrification can impact them… and also looking to more and more efficient engines and airframes”.

The aviation industry has pledged to reduce its net carbon emissions by 50 per cent by 2050 compared with 2005 levels, and the British sector went further this month with a vow to achieve net zero emissions by the same date.

At the Singapore Airshow, European plane maker Airbus unveiled a model of a futuristic new jet that blends wings with body and has two rear-mounted engines.

The demonstrator model’s sleek design is meant to reduce aerodynamic drag, and the manufacturer says it has the potential to cut fuel consumption by up to 20 per cent compared to current single-aisle aircraft.

Franco-Italian manufacturer ATR was meanwhile keen to highlight that its turboprop aircraft — popular for short hops, particularly in parts of Asia with poor infrastructure — burns 40 per cent less fuel compared with a jet of the same size.

“It is a trade-off between fuel consumption and speed,” ATR chief executive Stefano Bortoli told AFP.

“You can gain five, 10 minutes with a faster jet but in terms of pollution, it is more damaging.”

There have also been steps towards producing electric planes. The world’s first fully electric aircraft — designed by engineering firm magniX — made its inaugural test flight in December in Canada.

Swiss company Smartflyer is developing a hybrid-electric aircraft for four people and is aiming for a maiden flight in 2022. As well as reducing emissions, the aircraft is less noisy and cheaper to operate due in part to lower fuel costs.

But Aldo Montanari, the company’s head of avionics and user interface, cautioned such projects would not be quick.

“The pressure is quite big… and I think the industry has understood but they need time to react, they cannot do it in one year,” he said. “It has to be safe.”

Biofuels are touted as a major route for the aviation industry to cut carbon emissions, and several airlines have in recent years operated commercial flights using them.

But prices remain higher than regular fuel, and they represent just a tiny proportion of jet fuel used globally.

Despite the efforts, environmentalists accuse the aviation industry of moving too slowly as more evidence emerges of the devastating impacts of climate change.

“It will take a long time for airlines to become sustainable,” Dewi Zloch, climate and energy campaigner with Greenpeace, told AFP.

US pitches ‘big tent’ for Huawei rivals in Europe