Police say the Sindh lawmak­er was gunned down by her nephew over a land disput­e
By Z Ali
Published: February 15, 2020
Tweet Email 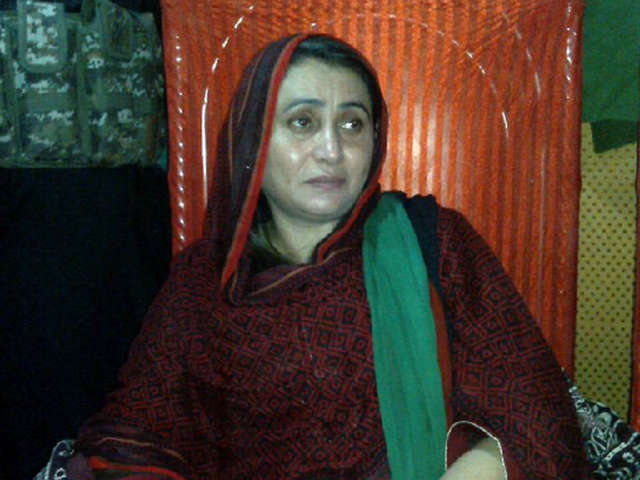 Police says the Sindh lawmaker was gunned down by her nephew over a land dispute. PHOTO: SOCIAL MEDIA

Ansari, who was 49 years old, was visiting Ali Murad Khokhar for the chehlum of her brother-in-law, Zahid Hussain Khokhar. She sustained three bullet wounds and breathed her last in the People’s Medical University Hospital (PMUH), Nawabshah.

Shaheed Benazirabad DIG Mazhar Nawaz Shaikh confirmed that the slain MPA’s relatives were involved in the murder. Ansari was shot by the nephew of her deceased brother-in-law.

“We had gone to attend the chehlum of our brother-in-law. I was attending the majlis when we heard the gunshots and I rushed back home,” stated Altaf Khokhar, the MPA’s brother, while speaking to the media at the hospital. He claimed that Zahid’s nephew, Waqar Khokhar shot Ansari in front of other family members.

Days before her murder, Ansari had written a letter to the deputy commissioner and SSP of Naushero Feroze district, asking for protection for herself, her widowed sister and her children. “Akhtar Ali Khokhar, his brothers, and his son Akhtiar Khokhar are threatening and harassing me and my widowed sister, [telling us] that they will murder us and the children of late Zahid Hussain Khokhar,” she stated in her letter.

The MPA had claimed that Zahid, who died a natural death on January 5, had transferred his property to his wife and children while he was still alive. However, his brothers were reluctant to hand over the property to his widow and their children.

Ansari had requested the DC and the SSP to keep her statement on record and provide protection for herself and her relatives.

Her brother Altaf and her husband, Dr Hameed Ansari, blamed the police for failing to provide them with adequate security.

“The local administration took no steps for her security,” said Dr Hameed.

Sources in the family told The Express Tribune that the MPA had been advised against visiting the village for her brother-in-law’s chehlum because of the fear that untoward events might occur.

However, Ansari did not pay heed to the advice and travelled to Ali Murad Khokhar with her brother.

Mumtaz Chandio, another MPA from the PPP who belongs to Naushero Feroze, claimed that although Ansari had written a letter seeking protection, the Ansaris and the Khokhars had sorted out their differences a few days prior to the shooting. “It was only after the two sides settled their differences that she visited the village,” he added.

Following the shooting, the police surrounded the village, but the suspect and his family had already escaped. Mumtaz stated that the police had been asked not to harass any residents of the village apart from those who were directly involved in the murder.

According to PMUH’s Dr Saeeda, who conducted the postmortem, Ansari sustained three gunshots to her abdomen.

No suspect could be arrested by the filing of the report, while no case had been registered either.

On hearing news of her passing, a large number of the PPP’s elected representative and workers arrived at the hospital. Condemning the killing, MPAs Ghulam Qadir Chandio and Ali Hassan Zardari, both of whom were present at the hospital, insisted that the murderers would not be spared.

Meanwhile, PPP chairperson Bilawal Bhutto Zardari and Sindh Chief Minister Syed Murad Ali Shah also condemned the murder. Bilawal, who said he was shaken by the news, called Ansari an asset for the party and demanded an immediate inquiry into the incident.

Deputy commissioner Rao Bilal Shahid told the media that the CM was being provided consistent updates on the investigation and the efforts being made to apprehend the suspects by the Naushero Feroze SSP.

Sindh police chief Dr Kaleem Imam has also sought a report regarding the attack and issued directives to officials to ensure the protection of Ansari’s family.

Ansari, who lived in Ayaz Colony in Naushero Feroze, was elected as MPA from reserved seats twice, in 2013 and 2018. She was also district president of the PPP ladies wing.