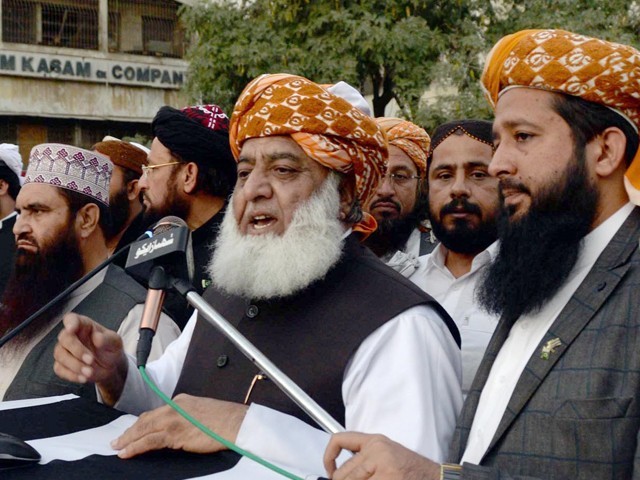 ISLAMABAD: The JUI-F has dared the prime minister to file a treason case against Maulana Fazlur Rehman as opposition lawmakers denounced Imran Khan’s call for trying the politico-religious leader under Article 6 of the Constitution.

Premier Imran’s statement ruffled the opposition’s feathers in the National Assembly session on Friday where the Turkish leader earlier in the day delivered an address to lawmakers from both chambers of parliament.

“The government would stoop to a new low in victimisation of its political rivals, if it goes ahead,” he added.

Bilawal questioned the rationale for filing the treason cases against the two opposition leaders. “TTP’s former spokesperson Ehsanullah Ehsan has been allowed to escape, while the government is talking about trying Maulana Fazlur Rehman and Khawaja Asif for treason,” he wondered.

PML-N’s Khawaja Asif lamented that the prime minister’s unnecessary statement against the JUI-F has taken the spotlight off the Turkish leader’s visit.

He advised Imran Khan to do some introspection. A party which staged a 126-day dharna at D-Chowk is questioning the objectives of a 13-day sit-in by the JUI-F, he asked while referring to a marathon protest staged by the PTI against the PML-N government in 2014.

“Does the government want to muzzle all voices of dissent? Article 6 should be invoked against those who stormed parliament and attacked democracy,” Asif said.

“It’s disappointing that Ehsanullah Ehsan has been allowed to escape, while politicians are thrown into jails.”

JUI-F lawmaker Maulana Asad Mehmood dared the prime minister to initiate a treason case against Maulana Fazlur Rehman. “I’m challenging Imran Khan to go ahead and try him under Article 6,” he said.

“A treason case should have been filed against the prime minister for speaking against the state institutions during his US and Iran tours.”

Mehmood said the opposition didn’t consider the PTI government as legal and constitutional. “No matter what he does against the opposition, we’ll continue to call him a selected prime minister,” he said while alluding that the government was victimising its political rivals.

JUI-F chief Maulana Fazlur Rehman says he had called off his 13-day dharna last year after receiving an “assurance” that Premier Imran would resign in 2020 and fresh elections would be held within three months of his resignation.

However, he wouldn’t say who had given him the “assurance”.

Minister of State for Parliamentary Affairs Ali Muhammad Khan sought to placate the opposition lawmakers, saying the JUI-F had the constitutional right to stage a sit-in.

“The government will not file any baseless case against anyone, but it has to be ascertained who had given the Maulana the assurance he spoke about,” he said while calling upon the JUI-F to clarify his statement.

Earlier during the question-hour, the opposition MPs staged a protest over the absence of the federal ministers from the house.

PPP’s Shazia Marri said the speaker has given a ruling against delayed arrivals in sessions, but the treasury members who are supposed to furnish answers to our questions are absent.