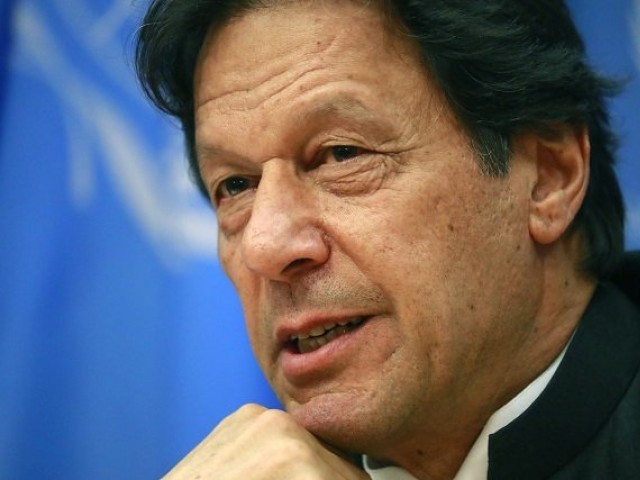 “He [Fazl] should be charged under Article 6 of the Constitution,” Imran said while speaking to a select group of media persons at his residence in Islamabad on Friday.

The politico-religious leader claims that he had called off his dharna only after receiving an assurance that Premier Imran would resign in 2020 and fresh elections would be held within three months of his resignation.

The prime minister also said his government would introduce electoral reforms to ensure that free and fair elections are held in future.

A bill will be tabled in parliament to introduce biometric voting, he added. “The government also plans to bring changes in the Senate elections in an effort to stop horse trading. Members of the upper house of parliament should be elected through show of hands,” he added.

He also called electricity and gas tariffs as the single most important issue for his government at this stage but categorically stated that his government would not increase the electricity prices. “The government can no more burden the industry by increasing power tariffs,” he said.

The power tariff increase was one of the contentious issues in talks between Pakistan and the IMF, which caused some delays in conclusion of the second review of the bailout package.

The prime minister blamed his predecessor — the PML-N – for the current situation in the energy sector. The power tariffs were hiked in the past due to expensive power purchase agreements signed by the PML-N, he said and blamed the high cost of generation for the multiplying circular debt.

According to media reports, circular debt has swelled to Rs1.9 trillion by the end of December 2019 — up from Rs1.2 trillion left behind by the PML-N.

The premier said a meeting of all the energy sector stakeholders would be convened next week, as the current power purchase prices were not sustainable for the public sector.

He also said that despite a 50% reduction in global prices, the government was bound to buy expensive LNG from Qatar due to a 15-year deal signed by the PML-N.

The prime minister also spoke about rising food inflation in the country but largely blamed his predecessors for it. The government had to devalue the currency to address the current account deficit crisis, which caused inflation.

But he admitted that the wheat and sugar crises and inflation caused by it “was avoidable”.

To a question, Imran said senior PTI leader Jahangir Tareen and Food Security Minister Khusro Bakhtiar have not been named in the FIA-led inquiry into the crises.

The initial report was incomplete and has been sent back with 20 observations, he said while promising that the findings would be disclosed before the public.

Imran said the government wanted to find out why the concerned departments had not given early warnings about the brewing crisis.

Opposition lawmakers have repeatedly demanded that Tareen and Bakhtiar should be probed for the recent sugar crisis as they own mills.

The prime minister also criticised the performance of the Competition Commission of Pakistan and said the anti-trust watchdog has failed to perform its role in checking cartelisation.

The prime minister also complained about “irresponsible reporting” by the media, which he alleged was engaged in his character assassination.

Had this media been in the United Kingdom, it would have gone bankrupt due to heavy fines imposed by regulators, he added.

He lamented that his statements were distorted by the media and false reports were published about his visit to China, due to which the government faced a lot of embarrassment in Beijing.

He said his visit was aimed at saving the country from default but the visit was described as an attempt to review CPEC.

The prime minister also deplored that the courts were not playing their role and were instead giving stay orders in cases which delayed justice.

“I, as the prime minister of Pakistan, could not get justice in a case of false allegation against me that I changed the CDA chairman to get my house regularised,” he said.