Per the Punjab Wildli­fe Dept, the exotic ‘Indian guests’ have been shifte­d to differ­ent zoos and parks of the provin­ce
By Asif Mehmood
Published: February 15, 2020
Tweet Email 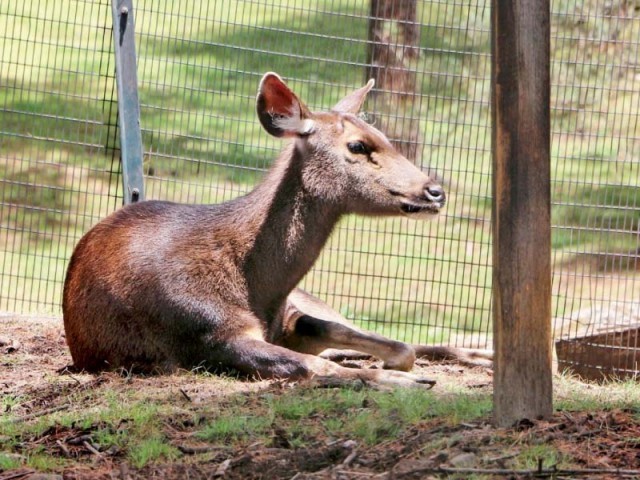 LAHORE: In a bid to save their lives from hunters and in search of food, herds of wild deer (Sambar) have entered Pakistan from India. The uninvited Indian guests are well cared for as Lahore’s Wildlife Jallo Park is not only nurturing them but have also started breeding them.

Owing to their abundance in areas that border Pakistan and the Occupied Kashmir, together with the growing trend of hunting, the animals instinctively run away from places where they feel threatened. As a result, they enter Kasur, Lahore and Sialkot to save their lives.

According to wildlife authorities, when Sambar and Nilgai (blue bull) cross the border and enter Pakistan, locals of the area catch them and even provide first-aid to the injured ones.

Once the locals informed the Punjab Wildlife Protection Department, a rescue team is immediately sent to shift the animals to various zoos and wildlife parks.

Officials at the wildlife department told The Express Tribune that so far, the number of Sambar deer that have entered Pakistan has reached 18, out of which 12 are kept at the Jallo Park. Four of them are males, while the remaining are females. Per officials, two fawns were also born a few weeks ago. One of the couples is also kept at the Lahore Safari Park for breeding purposes.

The Lahore Safari Park Deputy Director Chaudhry Shafqat Ali said that the park has created a separate enclosure for injured animals brought from the western border of Punjab.

“The injured animals, including wild deer, blue bull and others, are given proper food and care in their enclosures. Their wounds are treated and a balanced diet is provided to them to help them get healthy,” he said. “As they continuously run for hours through thorns and bushes, they receive multiple wounds. Few are also attacked by wild pigs and wild dogs, but they manage to escape to protect their lives.”

He added that even though most of the wounded animals are saved, those with deep wounds often die.

The veterinary officer of Jallo Park, Dr Amna Fayyaz said that the injured animals brought to the park are first kept in quarantine for some time under observation because they are feared to be carrying dangerous diseases with a potential to affect other animals and birds.

“Usually, we isolate new animals to observe them. Once they become used to the new environment and begin to eat per routine, they are transferred to the enclosures so that they can normally socialise with other animals of their kind,” Dr Amna said.

She added that a balanced, monitored diet also help the animals to breed and give birth to healthy offspring.

Badar Munir, the honorary game warden of Punjab Wildlife said that Pakistan is a loving nation which loves its people as well as animals and birds.

“It is due to this reason that animals entering Pakistan after crossing the Indian border in a bid to save their lives are treated well over here,” he said. “There is nether a border for animals and birds nor do they need a visa. Hence, the animals that enter Pakistan after crossing the Indian border will now be considered a property of Pakistan. India cannot demand their return.”