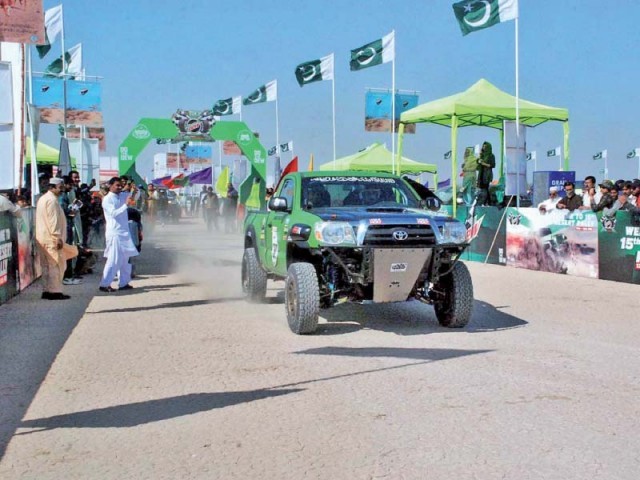 BAHAWALPUR: The first round of races of the 15th Cholistan Desert Jeep Rally for prepaid category has begun in the desert of Bahawalpur. Balochistan Chief Minister Jam Kamal Khan has flagged off the rally’s first vehicle, belonging to former champion Mir Nadir Magsi.

Speaking on the occasion, Balochistan Chief Minister Jam Kamal said the holding of the 15th Cholistan Desert Jeep Rally is an embodiment of a thousand years of great history which would highlight the soft image of Pakistan to the international community. “This event will also enhance socioeconomic activities in the region.”

He expressed these views while addressing the flag-off of the prepared category vehicles at the jeep rally on Friday.

The race for the prepared category, stage one, began on Friday with 53 vehicles participating in it.

Magsi, along with other drivers, left for the track and crossed the 220-km track. Drivers will reach Fort Marwat where a bonfire has been arranged for them on Saturday night. Reportedly, there will be a stock category and women’s race today. Fireworks will be staged at night along with a musical night.

On Sunday (tomorrow), there will be a motorcycle race including the final of the prepared category. The prime minister is expected to give away prizes to the winners of Pakistan.

In the prepared category, 58 vehicles are taking part which will drive through the route of 220 kilometres, while on February 16 the vehicles will cross a distance of 246 kilometres.

The Balochistan CM further said that racers from across the country took part in this desert rally and this will strengthen interprovincial coordination. “This event will help boost tourism in Pakistan and will also help with local and foreign investments in the country.”

He maintained that the participants in this race are playing a lead role in boosting the national identity of Pakistan on an international level.

The Balochistan chief minister thanked Punjab Chief Minister Sardar Usman Buzdar for inviting him as a special guest at the desert rally. “I am also thankful to the government of Punjab for their excellent hospitality.”

Addressing the ceremony, Adviser to the Punjab CM on Tourism and PHA Asif Mehmood said that the Balochistan CM’s participation in this event has glorified the event for which the provincial government is grateful to him.

The Cholistan rally has gained national and international recognition over the last 15 years, evolving into a major event, he added.