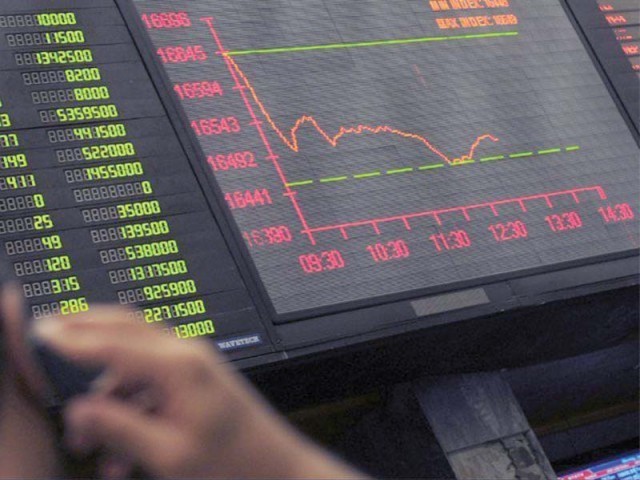 KARACHI: Research houses have revised down their projections for the possible return of investment to the Pakistan Stock Exchange (PSX) in the current calendar year, citing a prolonged economic stabilisation phase and delay in reduction in the key policy rate, which will restrict growth of the bourse.

“We have revised down our growth projection for the PSX benchmark KSE-100 index to 49,000 points for the current calendar year,” BMA Capital Executive Director Saad Hashmi said while talking to The Express Tribune.

At the end of the previous calendar year, the brokerage house had anticipated that the index would hit 55,000 points by the close of December 2020, supported by a likely reduction in interest rate in March 2020.

“In view of…economic ambiguity, we have tweaked several of our assumptions, particularly our target PE (price-earnings ratio), which we have revised down by eight times,” said BMA Capital analyst Yusuf Rahman in a report titled “Pakistan Strategy – Revisiting Market Thesis amid Escalating Uncertainty”.

The high interest rate does not allow financial institutions and individuals to invest heavily in stocks around the world and encourage them to park excess money in risk-free fixed deposit schemes of banks.

However, a low interest rate pushes them to invest in the risky business of shares to earn comparatively higher profits.

The central bank has maintained the benchmark interest rate at an eight-year high of 13.25% since July 2019.

“We do not expect the central bank to make the first cut in interest rate before July 2020,” said Topline Securities’ Director Research Syed Atif Zafar.

The next four to five months seem to be tough since the inflation reading surged to 14.6% compared to market expectation of around 13.5% in January 2020.

Earlier, several research houses had anticipated the first rate cut in March 2020, considering a gradual slowdown in the rate of inflation.

Zafar, however, agreed things on the economic front were disturbing. He pointed out that the International Monetary Fund (IMF) mostly used the word “agreement” in its press releases issued at the end of every economic review of Pakistan to emphasise that it agreed with the country’s economic targets and reforms.

“The word ‘agreement’ is missing in the latest IMF press release issued today (Friday) under the current $6-billion loan programme for Islamabad,” he said.

Earlier, Pakistan had demanded several relaxations from the IMF, including an additional cut in the tax collection target for the current fiscal year and delay in further hike in electricity tariffs.

The stock market may remain under selling pressure, going forward.

“The forthcoming Financial Action Task Force (FATF) review of Pakistan actions to implement anti-money laundering (AML) and combating financing of terrorism (CFT) measures from February 16 will keep the market under pressure. We may see a correction of 1,000 to 2,000 points these days,” Zafar said. He said his research house did not revise down the index target for 2020 since it had already taken a conservative approach.

“We anticipated the PSX (benchmark index) will rise to 49,000 points (which is the revised projection of BMA Capital),” he said.

JS Global Head of Research Hussain Haider did not see the market achieving the previously anticipated level of 50,000 points level in 2020.

“Everyone has predicted the level for the year, but stock markets do not do what majority of people think,” he said.

He termed the practice of projecting index level for one-year as an unwise one.

“Brokerage houses should avoid making short-term projections for one-year period. Rather, they should take a long-term view for about five-year period. Unfolding of unforeseen events in the short-run change market direction,” he said.

He said the economic stabilisation phase has prolonged beyond the expected timeline.

“If the government manages to implement the promised economic reforms then no one can stop market from hitting 60,000 points,” he said.