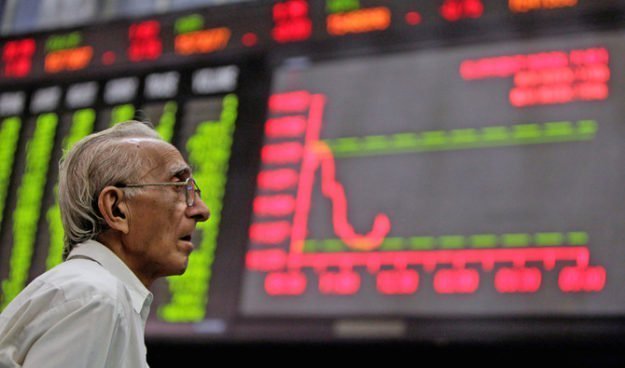 KARACHI: The stock market extended its losses on Friday as the benchmark index shed over 200 points amid thin trading because of concern over political and economic uncertainty.

Earlier, trading began on a positive note but the market could not sustain the momentum and soon dived into the red zone. Near close, the market made some recovery following news of issuance of Sukuk-II for reducing the circular debt.

Among economic indicators, Pakistan’s economic growth is expected to slow down in the current fiscal year and exports have remained almost stagnant. Apart from these, inflation is on the rise.

Moreover, political tussle over NAB cases against opposition leaders and calls for fresh elections also had an impact on the stock market.

Arif Habib Limited, in its report, stated that the market opened on a positive note with a gain of 139 points but closed in the red.

During the two sessions of the day, the index lost 361 points in total but in the last hour of trading the market recovered somewhat with Pakistan State Oil (PSO) showing some life in the wake of news about Sukuk-II float.

“Selling activity was noted across the board barring a few stocks in the banking sector. Lotte Chemical announced relatively better results, however, concern over product margins pushed investors to sell positions,” it said.

“The transport sector led the volumes with trading in 19 million shares, followed by chemical stocks (15.3 million) and technology firms (13.4 million).”

“The market remained lacklustre in today’s trading session with value buying seen ahead of major corporate results,” he said. “Furthermore, the market remained jittery due to the increased cut-off yield of T-bills.”

“Going forward, we expect the market to trade sideways in the short term on the back of political uncertainty and FATF (Financial Action Task Force) review session this month,” Ladhani concluded.

Overall, trading volumes declined to 117.6 million shares compared with Thursday’s tally of 197.4 million. The value of shares traded during the day was Rs3.8 billion.

Shares of 326 companies were traded. At the end of the day, 95 stocks closed higher, 211 declined and 20 remained unchanged.

Foreign institutional investors were net sellers of Rs82.14 million worth of shares during the trading session, according to data compiled by the National Clearing Company of Pakistan.