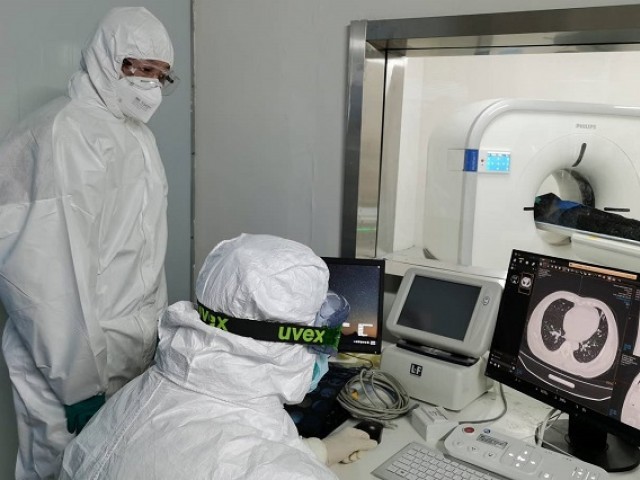 PARIS: Researchers both public and private have launched efforts to combat the novel coronavirus that has already infected tens of thousands of people in China, and profit isn’t their only motivation.

Researchers are working in three main areas: developing diagnostic tests, developing a vaccine, and testing of anti-virals as a treatment for those infected.

Major public research laboratories such as the US National Institutes of Health (NIH), non-profit foundations like the Pasteur Institute in France as well as universities like the University of Melbourne in Australia have started working on the coronavirus.

Biotech firms have also jumped in, such as Moderna Therapeutics et Inovio Pharma, which were selected by the Coalition for Epidemic Preparedness Innovations (CEPI), a global alliance financing and coordinating the development of vaccines against emerging infectious diseases.

US biotech firm Gilead is meanwhile working with Chinese authorities on the potential use of remdesivir, which it developed as a treatment for Ebola, for the novel coronavirus.

Some pharma giants have also offered their help, such as Britain’s GlaxoSmithKline (GSK), which said it would make available its adjuvant technology that helps the body produce a stronger immune response to vaccines.

In the United States, Johnson and Johnson has said it will collaborate with public researchers to accelerate development of a vaccine, while in France Sanofi has lent its expertise to CEPI.

Overall, public and private researchers are collaborating, of which the CEPI is a good illustration.

Vaccines can be big business. The French government alone spent $413 million for vaccines against the H1N1 swine flu in 2009-2010.

On Wall Street, the shares in biotech firms Moderna and Inovio shot higher after their coronavirus work was announced… although they later pulled back.

While vaccines may be a very important product they are not a very lucrative one as they are usually sold a low prices.

Most pharmaceutical firms have chosen to concentrate on developing drugs for cancer and rare diseases, where the prices are much higher, with some costing as much as $2 million per treatment.

“The vaccine business in general represents 2 per cent of the global drug market,” said economist Claude Le Pen who focuses on the health sector.

“If a laboratory finds a therapy, in the current climate there will be intense pressure for the treatment to be sold at a low cost,” he added.
Added to that is the risk that after months of work to develop and test a treatment the epidemic could long be over.

“In terms of public and government relations, for a laboratory it is logical to say ‘we are health actors and we’ll take care of you,'” said Jean-Jacques Le Fur, a pharmaceutical industry specialist at investment bank Bryan, Garnier & Co.

“There is also scientific prestige. You shouldn’t underestimate professional motivation,” he added.

Biotech companies that succeed in adapting a vaccine or antiviral treatment quickly will be able to more easily attract financing for their own projects, Le Fur noted.

This is a concern that France’s pharmaceutical academy voiced this week. That is because Asia produces most of the active ingredients used in drugs. Some 80 per cent of the active components used in EU medicines come from third countries, with India and China alone accounting for 60 per cent.

European pharmaceutical companies said there is no reason to panic.
“In general we have several suppliers for key ingredients in order to reduce the risk of supply disruptions and the situation in China is no different,” said France’s Sanofi.