Invest­ors think econom­ic impact of the virus outbre­ak will not be as deep as feared­
By Reuters
Published: February 14, 2020
Tweet Email 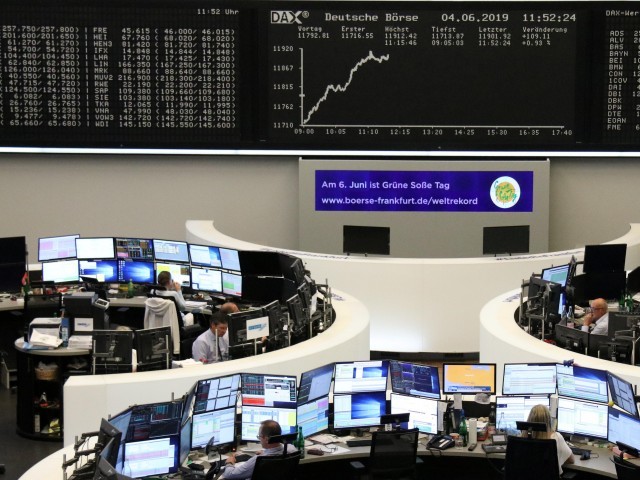 Investors think economic impact of the virus outbreak will not be as deep as feared. PHOTO: REUTERS

LONDON: Stock markets across the world ticked higher on Friday, as investors bet that the damage to the global economy from China’s coronavirus outbreak would not be long-lasting.

Europe’s broad Euro Stoxx 600 hit a record high, gaining 0.1% to mirror gains in Asia after a choppy start to the day.

Indices in London and Frankfurt gained 0.1% and 0.2% respectively, with the former moving higher after AstraZeneca shares turned positive. The drugmaker had earlier fallen 5% after it said it would take a hit from the coronavirus outbreak.

It was a similar picture in Paris which clawed back some early losses as Renault shares turned positive. It was last down 0.1%.

Renault had dropped over 4% on its first loss in 10 years as the car company set a lower operating margin goal for 2020, a crunch year for its planned reboot alongside partner Nissan after a scandal surrounding former boss Carlos Ghosn.

Chinese health authorities reported more than 5,000 new cases of the disease, with the National Health Commission saying it had recorded 121 new deaths on the mainland on February 13, taking the accumulated total infected to 63,851 people.

Investors said they thought the economic impact of the outbreak would not be as deep as feared, with some also finding succour in a spread beyond China that is not as rapid as feared.

Others have latched on to the possibility of further central bank stimulus measures in response to any slowdown. China’s central bank, for example, has already pumped liquidity into its economy.

“Our base case is that the virus can be largely controlled by end-March,” Mark Haefele, Chief Investment Officer at UBS Global Wealth Management, wrote to clients.

“The negative impact on the economy will be mostly confined to 1Q,” he wrote, predicting that growth would rebound from March on the release of suppressed demand and monetary and fiscal policy support.

Earlier, Asian shares had risen towards their second straight week of gains, helped by hopes governments will make provisions to soften the impact on their economies from the coronavirus epidemic.

MSCI’s broadest index of Asia-Pacific shares outside Japan rose 0.1% for a weekly gain of almost 2%. China’s blue-chip CSI300 shares, meanwhile, rose 0.7%, having staged a stunning recovery to claw back 95% of their losses made after the outbreak.