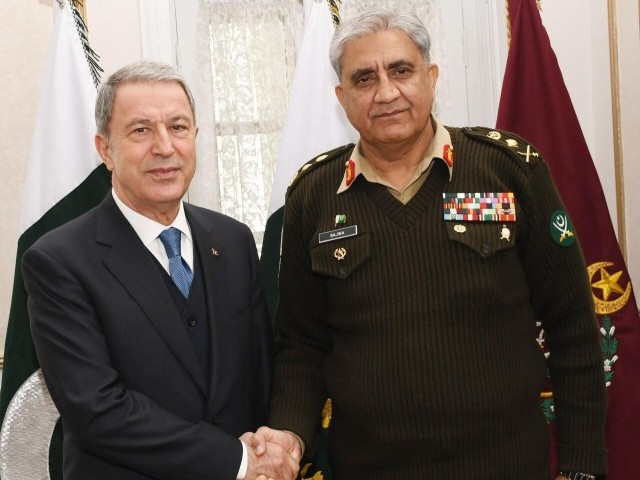 Gen Qamar says Pakistan values its unique relationship with Turkey and would always stand by our brothers. PHOTO: ISPR

During the meeting at the GHQ in Rawalpindi, the army chief said that Pakistan values its unique relationship with Turkey and would always stand by our brothers, said a statement issued by the Inter-Services Public Relations (ISPR).

“The visiting dignitary appreciated Pakistan’s contributions for conflict prevention in the region and for standing by Turkey and pledged the same for Pakistan,” it added.

The Turkish national defence minister is part of President Recep Tayyip Erdogan’s delegation, who is on a two-day official visit to Pakistan, which officials believe holds great significance against the backdrop of recent regional and international developments.

Military officers belonging to “friendly countries”, who are attending military training courses at the Command and Staff College Quetta, visited the ISPR headquarters at the GHQ, the media wing of Pakistan’s military said in a statement.

Maj-Gen Babar apprised briefed the visiting officers on “geo-strategic environment, situation on LoC, evolving threat spectrum, Pakistan’s role in the fight against terrorism and peace/stability in the region,” the ISPR added.

Imran thanks Erdogan for raising voice for people of occupied Kashmir