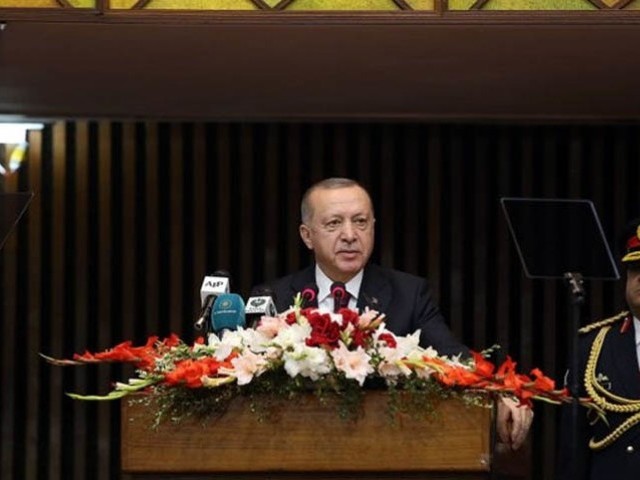 ISLAMABAD: Turkish President Recep Tayyip Erdogan on Friday pledged to continue his unflinching support for Islamabad’s stance on Kashmir, comparing it to Turkey’s own historic 1915 Gallipoli campaign and going as far as saying that the plight of the people of the Indian-occupied territory meant as much to his country as it did to Pakistan as the two countries signed a string of pacts to strengthen ties in various fields.

Addressing a joint session of the Pakistani parliament for a record fourth time, the Turkish head of state also vowed to help Islamabad stay off the blacklist of the global financial watchdog, the Financial Action Task Force (FATF), at its meeting in Paris next week.

“Today, Kashmir for us is what it is for you [Pakistanis]. How can we forget those [Pakistanis] who prayed for Turkey? Our friendship is based on love and not vested interests. Like in the past, we will continue to support Pakistan in the future,” Erdogan said.

“Pakistan and Turkey’s relations are admirable for others. The much-envied Turkey-Pakistan brotherhood today, is a true brotherhood, strengthened by history and reinforced by historical events,” he added.

He recalled that Pakistan had always supported Turkey during difficult times. “We can never forget this.”

He pointed out how the Muslims of the Subcontinent had backed Turkey during the Gallipoli campaign, also known as the Battle of Canakkale, in 1915 during World War I, pointing out a rally held in Lahore led by Allama Iqbal.

Quoting a poem by Iqbal, which he said the great poet had read out loud at the Lahore rally, The Turkish president said: Like the poet of Lahore [Iqbal], the people [at the rally] were drowning in these emotions. The people of Pakistan have always stood shoulder to shoulder with the people of Turkey,” he noted.

Elaborating on the incident, Erdogan said while Turkish soldiers were defending the Dardanelles Strait with a glorious resistance in 1915, a rally took place in Lahore 6,000 kilometres from the front and it was “recorded on the unforgettable pages of history”.

“The theme of this historical rally in Lahore Square was Canakkale. On that day, Lahore Square was jam-packed with Muslims as we were struggling to survive and our brothers and sisters here [Subcontinent] were also under pressure of the colonialists. Despite challenges and threats, they raised a huge charity for Canakkale through the exhibitions in the square.”

The Turkish president further said the events that happened in Canakkale a hundred years ago were being repeated in Indian Occupied Kashmir and Turkey would continue to raise its voice against New Delhi’s oppression.

“We can never forget the support of the Muslims of the Subcontinent during those times,” he added.

The Turkish president observed that the Kashmir issue could not be resolved through conflict but through justice and fairness. “Such a solution will be in the interest of all parties. Turkey will continue to stand by justice, peace and dialogue,” he said.

“Our Kashmiri brothers and sisters have suffered for decades and the transgressions have become graver. We once again demonstrated our country’s sensitivity in this matter by defending Kashmir at the 74th United Nations General Assembly.”

Erdogan also thanked Pakistan on behalf of the Turkish people for the support it had extended when there were earthquakes in his country.

Speaking on strengthening trade ties with Pakistan, the Turkish president said the ‘Strategic Economic Framework’ and ‘Action Plan’ documents that Ankara was signing with Islamabad would cover a wide range of industries from trade to infrastructure and from investment to tourism.

“[They] will constitute a road map for the two countries,” he added.

“I have come with a delegation of Turkish businessmen. After Friday prayers, they will be having business discussions with [their] Pakistani counterparts.”

The Turkish president noted that Islamabad was facing political pressure from its critics at the upcoming FATF meeting. “I also want to emphasise that we will give support to Pakistan [at the FATF meeting,” he added.

He commended Pakistan’s fight against terrorism, saying that the country had been affected by religious fanaticism. “The country has made enormous sacrifices.”

Pledging his continued support to Pakistan on counter-terrorism, the Turkish head of state said the two countries were the most affected by terrorism “due to their geographic locations”.

“No one can break the bond of Muslim brotherhood in any way. Everyone should stand with one another.”

“I thank God for giving me this opportunity. I am thankful to each of you individually for allowing me to address this joint session of parliament. I would like to convey the greeting of 83 million brothers and sisters in Turkey,” Erdogan said at the start of his address.

The Turkish president thanked the people of Pakistan for the warm welcome he had received on his arrival.

“Here, in Pakistan, we never consider ourselves as strangers. We feel ourselves at home, in one of the most important meeting points in Asia, in the fertile geography of the Islamic world,” he added.

Referring to other conflict zones, the Turkish president said it was their responsibility to provide assistance to Muslims, no matter where they were.

“Turkey has played a leading role in Libya, Yemen, Syria and Palestine. We have been on the front lines of the battle to liberate innocent Muslims across the region.”

“With this understanding, Turkey endeavours to eliminate the differences between the Ummah, to find a solution to the disputes and to claim our righteous causes, especially Palestine, Cyprus and Kashmir.”

During his address, Erdogan also referred to the ‘deal of the century’ by US President Donald Trump. “This is not a peace plan, it’s a plan of occupation.”

“We have been actively engaged in all matters concerning the Muslim Ummah especially during our presidency of the Organization of Islamic Cooperation.”

“We took an honourable and determined stance against the attacks of Israel on our first Qibla, Al-Quds Al-Sharif. We declared to the whole world that we would not leave Haram Al-Sharif at the mercy of the occupying Israeli administration by saying,” Erdogan elaborated.

The Turkish president ended his speech by reciting a few verses of the Pakistani national anthem and prayers for the two countries and the Muslim world.

The session started with a recital from the Holy Quran followed by an introductory address by Speaker Asad Qaiser, who paid a tribute to the Turkish president and welcomed the leader to the Parliament.

“It is an honour for me to be able to welcome the Turkish president, a friend to Pakistan, and one of the most influential Muslim leaders in the world. Pakistan and Turkey have strong historical and emotional ties,” said the speaker.

The last time the Turkish president addressed the parliament was in 2016, under the leadership of then prime minister Nawaz Sharif.