We should not allow protec­tionis­m or trade walls betwee­n us, says Erdoga­n
By News Desk
Published: February 14, 2020
Tweet Email 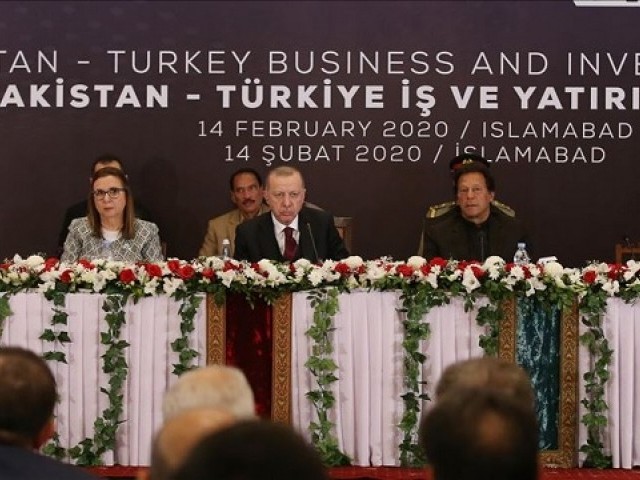 Turkish President Recep Tayyip Erdogan, while addressing Pakistan-Turkey Business and Investment Forum on Friday, expressed hope to increase business relations between Pakistan and Turkey and take advantage of untapped potential of both countries.

Addressing the forum alongside Prime Minister Imran Khan, President Ergodan said the two countries can collaborate in a number of industrial sectors for their mutual benefit.

“We should not allow protectionism or trade walls between us and have to bring trade relations to the level they deserve,” he said. “Turkey is one of the top twenty economies of the world and is increasing investment in Pakistan.”

“Turkey and Pakistan only have a bilateral trade volume of $800 million. We must increase it $1 billion in the first phase and then later to $5 billion,” he said.

“Of course we cannot obtain this by just goodwill. We need to take determined, clear and strong steps towards common objectives.”

Erdogan added that he is happy to see various Turkish companies from sectors such as food, energy and construction being active in Pakistan and playing and participating in the economy.

“We have brought down our debt from 72 per cent of GDP to 33 per cent. Turkey increased tourists from 13 million to 68 million, resulting in an increase to $35 billion from $8.5 billion earned from this sector.”

“Pakistan has a huge untapped potential in tourism including in beach and historic areas,” PM Imran said. “Pakistan can greatly benefit from the Turkish experience in the development of necessary infrastructure for the promotion of tourism.”

The premier assured to fully facilitate the Turkish business community including their joint ventures with Pakistani companies and underscored that Pakistan desires to learn from the experiences of Turkey in the fields of agriculture and mining.

“Ours is the most business-friendly government. We have gained twenty places in the world ranking in ease of doing business,” the premier said.

The prime minister further expressed confidence that the business communities of both countries will come forward to benefit from the excellent political relationship that exists between the two countries.