Javed Akhtar, Mahesh Bhatt call Modi a 'fascist' for his hatred towards Muslims

Javed Akhtar, Mahesh Bhatt call Modi a 'fascist' for his hatred towards Muslims

The latter claime­d Islamo­phobia is a lifeli­ne for the BJP
By Entertainment Desk
Published: February 14, 2020
Tweet Email 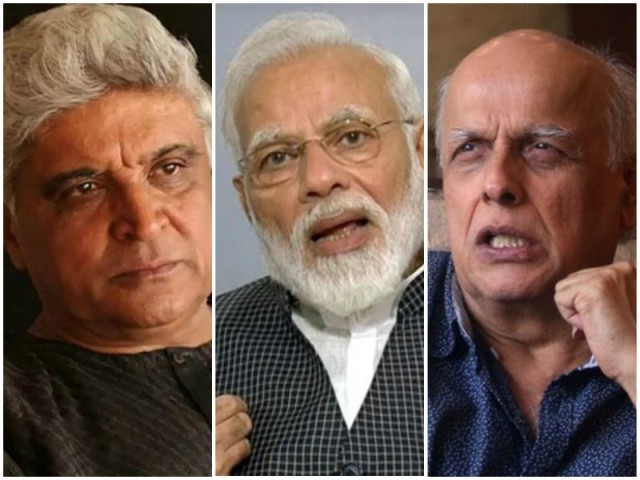 He questioned both of them about Modi and his regime, asking whether they believe he is a fascist or not. To this Akhtar can be seen saying, “Of course he is, fascists don’t have horns on their heads. Being a fascist is a mindset, the mindset that ‘we are better than others and whatever problems we have are because of others.'”

He went on to add, “The moment you hate people in wholesale, you are a fascist.”

For this Friday's @AJUpFront, I asked @Javedakhtarjadu and @MaheshNBhatt, two of the biggest names in Bollywood, whether Narendra Modi is a fascist and why their fellow industry members have been so silent in the face of growing intolerance – preview clip:pic.twitter.com/E1hL3U5gKl

In another clip, Hasan can be seen telling Bhatt about how Muslims around the world are viewing India as Islamophobic state, especially in terms of the situation in Kashmir. To this Bhatt responds in his signature calm yet threatening tone.

“I think the winds of Islamophobia blew through the world after 9/11 and I think that phobia’s crafted by the media over here. The pliable channels are working around the clock to create ‘the other’ to stay in power. They need the other to stay in power.”

The director then blatantly concluded that the BJP’s lifeline is to hate the Muslims. “It’s they’re lifeline, let’s not mince our words.”

Jim Carrey under fire for passing ‘sleazy’ comments at a journalist