The Catala­n coach has a contra­ct at the Etihad until the end of next season­
By AFP
Published: February 14, 2020
Tweet Email 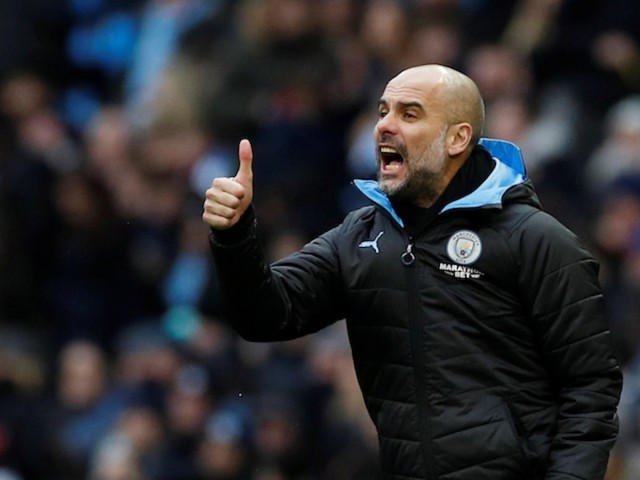 The Catalan coach has a contract at the Etihad until the end of next season. PHOTO: AFP

LONDON: Manchester City manager Pep Guardiola said he could be sacked if he fails to beat Real Madrid in the last 16 of the Champions League.

Guardiola has won five major trophies in three seasons at the Etihad, but a failure to progress beyond the quarter-finals of the Champions League has been the big disappointment of his reign.

Guardiola’s side trail Liverpool at the top of the Premier League by a mammoth 22 points this season with their campaign now set to be judged on how they fare in Europe.

“I want to win the Champions League. I dream (of it) and I will enjoy preparing for the games against Madrid,” Guardiola told Sky Sports.

“If we don’t beat them, OK, come the chairman or the sport director and say, ‘It’s not good enough, we want the Champions League, I’m going to sack you.’

“I don’t know (if this would happen). It has happened many times and could maybe happen.”

Guardiola has a contract at the Etihad until the end of next season.

After four years at Barcelona and three in charge of Bayern Munich, he is expected to fulfil his deal and enter a fifth season at one club for the first time in his managerial career.

But the Catalan coach also hit back at the suggestion that the success or failure of a season should only be measured in trophies.

“We give a bad, bad message for the new generation, for our kids, to just count the winner, the trophies to win,” added Guardiola.

“You say the season is a disaster but if you win the Champions League it will be exceptional. Why? It is difficult to win it.

“If you don’t, we can say in more than 100 years of history (there) were 100 failure seasons for Manchester City. That is not true.”