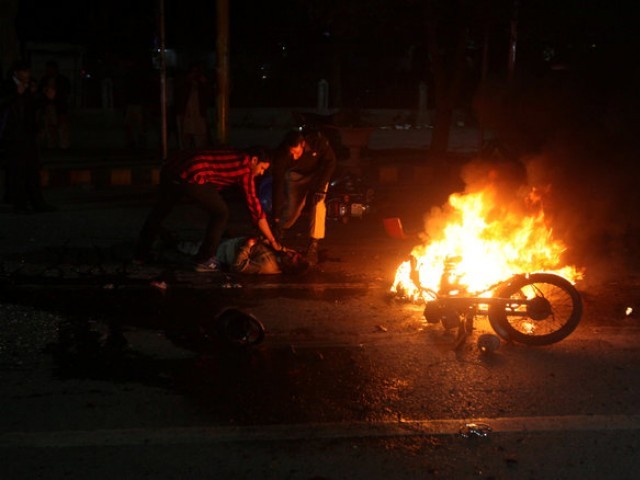 People check the condition of a victim after a blast in Lahore, Pakistan February 13, 2017. PHOTO: FILE

LAHORE: The Lahore Police paid homage to the martyrs of the Mall Road blast on its third anniversary on Thursday.

Over a dozen people including policemen were martyred when a suicide bomber blew up himself near a group of policemen deployed for the security of protesters in front of Punjab Assembly on February 13, 2017.

As part of the commemoration, Chief Traffic Police Officer (CTO) Liaqat Malik along with a large number of traffic wardens paid a visit to the grave of Mobeen. He laid a floral wreath there. Mother of Mobeen was also present on the occasion.

Other police officers and officials paid tribute to the martyr for his sacrifice.

Speaking on the occasion, Malik said martyrs were alive. “It is the day to rejuvenate their resolution that they will continue the martyrs’ mission,” he said. “It is also a reminder that we need to take care of the families of the martyrs. We salute the mothers who gave birth to such great children.”

Wife of Mobeen, Amina Mobeen, during an interview, said Mobeen was a military officer before joining the police. “His devotion was obvious. Throughout his career he had always been very committed and devoted that is why he might be awarded this honour,” she said.

Deputy Inspector General of Police (Operations Wing) Lahore Rai Babar Saeed on the occasion said that sacrificing life in the line of duty has always been a great tradition of Punjab Police. The role of officers and officials of the Punjab Police has been exemplary to maintain law and order situation in the country and defeat the vested interest of the terrorists to weaken our country.

He further said that the officers and officials who sacrificed their lives in the line of duty are the pride of Punjab Police.

Each and every policeman is striving hard and working diligently for providing security to the life and properties of people.