For a society to progress, ensuring women’s rights is essential

For a society to progress, ensuring women’s rights is essential 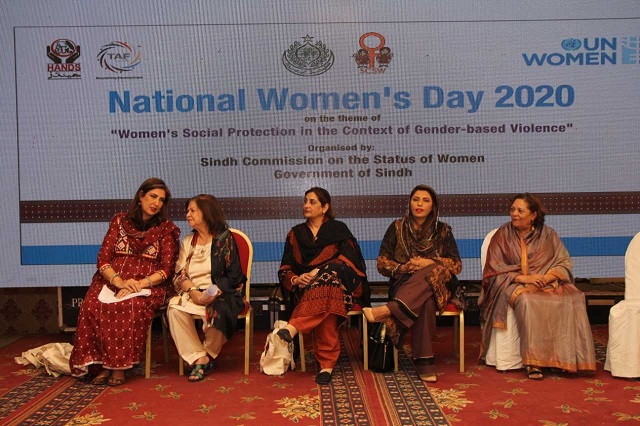 KARACHI: “A society which does not ensure and protect the rights of its women will never progress.” This strong message was sent by the Chief Minister of Sindh Syed Murad Ali Shah on the occasion of National Women’s Day, which was celebrated on February 12, 2020, in Karachi.

Organised by the Sindh Commission on the Status of Women (SCSW), with support from UN Women Pakistan and TAFF Foundation, the event brought politicians, bureaucrats, lawyers, civil society members, and academics under one roof.

Based on the theme of “women’s social protection in the context of gender-based violence (GBV),” the event not only brought forth some thought-provoking speeches on women’s issues but also highlighted women’s success stories from all over Sindh. 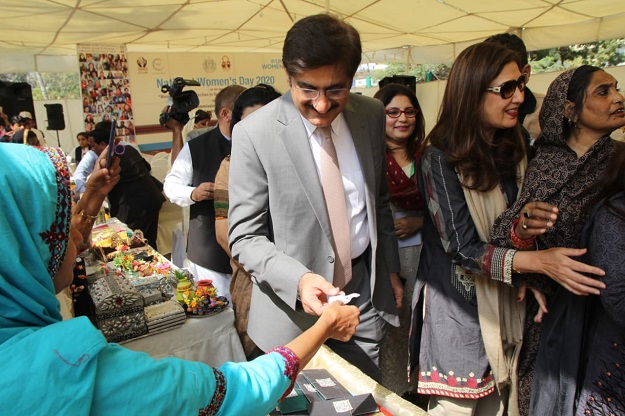 That’s not all, but an award distribution ceremony also took place to recognise the outstanding achievements of women from all walks of life.

Panel discussions on women’s education and health, their day-to-day struggles, incidents of GBV and the associated trauma, and the constitutional rights of women also took place to enlighten the audience.

“The government of Sindh has institutionalised gender equality in the province and [we have] the highest number of pro-women laws in the province to ensure that women’s rights are protected,” the chief minister added.

Highlighting the efforts of the Women Development Department (WDD), provincial minister Syeda Shehla Raza said that her department has been working hard to end violence against women and girls by preventing and promoting women’s rights in Sindh through legislation.

“The WDD is now sensitising women on the law of harassment at workplace and ending child marriages so that women and girls of Sindh could reach their full potentials and excel in different fields.”

The Deputy Country Representative of UN Women Pakistan Aisha Mukhtar appreciated the efforts of the SCSW despite the shortage of resources and said that UN Women shares the agenda of the commission in fighting for women’s equality in the province.

“UN Women believes in the equal inclusion of women in all spheres of life with a focus on five priority areas, including increased women’s participation and leadership, ending violence against women and girls, women’s participation in peace processes and security efforts, women economic empowerment, and governance and national planning,” Mukhtar said.

Shedding light on the topic of women’s rights in Sindh, the Australian Deputy High Commissioner to Pakistan Brek Batley said that his country has employed a holistic approach to reducing violence against women through institutional strengthening, policy advocacy and service delivery.

“Australia has provided funding worth AUD 11 million to establish and support the SCSW. [So far] the commission has not only advanced gender equality in the province but has also created an enabling environment for pro-women laws, including the Sindh Protection Against Harassment of Women at Workplace Act, the Domestic Violence Bill, Child Marriage Restraint Act, Sindh Dowry Act and Sindh Acid Control and Acid Crime Prevention Act,” he highlighted.

Saira Nizam, manager placements and business development, TAFF Foundation said that her NGO has signed a memorandum of understanding (MoU) with the SCSW and it will assist the commission to empower women in the province.

“Together with the SCSW, we want to promote women’s empowerment, and legal and financial independence in community and educational institutions.”

Panel discussions
Apart from the speeches, two separate panel discussions also took place at the event. The first discussion was based on women’s social protection and GBV. Panellists spoke at length about women’s struggles, the role of education in women’s empowerment, domestic violence, sexual harassment and women’s health. They also talked about prevention, prohibition and redressal of GBV.

The second panel focused on the constitutional rights of women where panellists explained how the law works, structural injustices that hold people back from reporting violence, rape cases and how they are fought in the court of law, and what type of legal assistance is provided to women. The session ended with a discussion on the lack of awareness about sexual harassment laws in educational institutions. 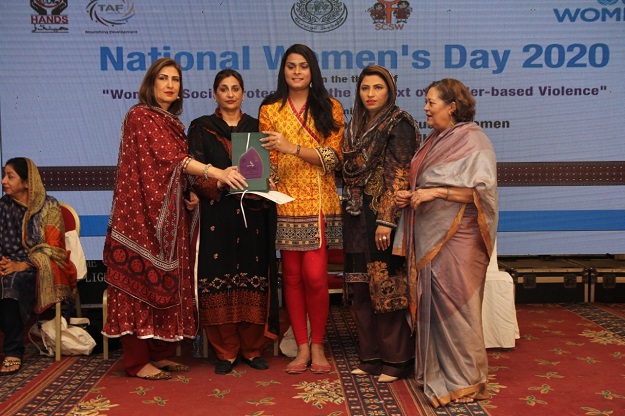 “We need to understand the false dichotomy between public and private lives of women that the society creates,” Advocate Palvasha Shahab said. “When we talk about women’s rights, they are always considered to be in the public domain.”

Palvasha cited some statistics and said that 90 per cent of women face some sort of domestic violence, while 47 per cent are subjected to sexual abuse, including marital rape. Despite the soaring numbers, only 0.4 per cent of women come forward to lodge complaints and seek legal help.

“Women are not reporting cases of GBV because society considers these matter a part of one’s private life. Therefore, [instead of solely blaming the justice system for being weak], we must also understand the attitudes and patterns of conduct that create an environment for women that stops them from speaking up. This has to change.”

Advocate Asiya Munir of War against Rape (WAR) spoke about the rape cases she fights in the court and highlighted how victim blaming and shaming is rampant, even inside courts.

“Whenever rape victims are brought to the court for their hearings, people talk about them and point fingers at them, as if it was their own fault,” Asiya explained. “There should be women-friendly spaces in courts where victims can openly talk about their ordeals without having to feel humiliated and intimidated.”

Pannellist Shehnila Zardari, associate professor at the Department of Software Engineering at NED University of Engineering and Technology, who deals with harassment on campuses, talked about the misconceptions that people have about educated, working women and said that all women face violence, irrespective of their socio-economic status.

“Sexual violence is rampant in educational institutions. A girl committed suicide in Jamshoro because she was being blackmailed,” Zardari said. “Her case comes under the law of sexual harassment as well as cybercrime, but since there is a lack of awareness among women and girls about their rights, they are forced to take extreme measures.”

Zardari also talked about the missing concept of consent in Pakistan and explained how victims are blamed if they are abused by someone they trust.

“Women should know that it’s not their fault if someone has subjected them to sexual harassment. “They should put the blame where it belongs.”

Recognition of women’s achievements
Apart from the meaningful speeches and discussions, an award-distribution ceremony also took place at the event to acknowledge the exceptional contributions of women from all walks of life.

Out of 81 nominees, a handful of winners were chosen on the basis of merit. Aside from that, Sindh CM Syed Murad Ali Shah also distributed the Mohtarma Shaheed Benazir Bhutto Life Achievement Award to women working on women rights and gender equality in Sindh.

Explaining the selection process, SCSW chairperson Nuzhat Shirin said that the commission’s advisory committee carried out the process with complete transparency so that no one was selected on the basis partiality or nepotism.“The SCSW tried its best to represent people from all districts of Sindh. The commission has made it a priority that women’s issues are not only highlighted but they are also resolved,” Shirin told The Express Tribune.

Sharing the commission’s future plans, Shirin added that the commission will also give the award to three men in the coming year to recognise their fight for women’s rights so as to ensure gender equality.

Tahira Iqbal, a victim of domestic violence who fought for her rights and raised five children as a single mother also received an award in acknowledgment of her struggles.

“I was a widow but when I remarried, I was subjected to severe abuse at the hands of my husband and in laws, she narrated her ordeal. “For the sake of my children, I decided to fight for my rights, sought separation, and single-handedly raised them by sewing clothes.”
Tahira joined the TAFF Foundation to receive free cooking and housekeeping classes and after successfully completing her course, she was hired as a housekeeper at the residence of the Italian consul general in Karachi.

“My message to other women is that they should never stay silent. If your husband is abusing you, speak up without fear because you have laws to protect you.”

Another awardee was Ester Jane, a visually impaired teacher who has dedicated 10 years of her life to teaching at a special school.“I feel really honoured to receive the award because my life-long struggles and achievements are finally recognised,” she said. “I encourage other differently-abled women and girls is to keep trying and never give up. And if someone tries to tell them that they can’t do it, consider it a form of encouragement to do better.”

“I am delighted to receive the award. Highlighting and recognising our struggles show that gender rights and diversity are finally being respected in Pakistan,” she concluded.

Shehnila Zardari also received an award for her activism against sexual violence on campuses.

“I think the award is an excellent initiative to recognise the great things that women are doing. The best part is that NGOs, different companies and individuals, all are recognised,” she said.

Theatre and cultural show
The event also presented some theatrical performances to highlight important issues, such as child marriages and women’s rights. 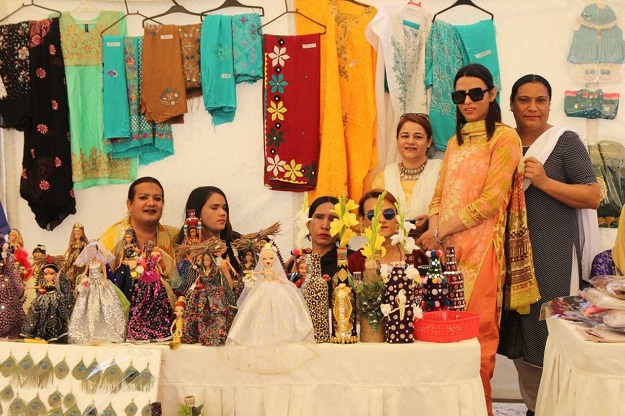 The event came to a conclusion with a cultural show that highlighted Sindh’s rich heritage.

Speaking on the success of the event, executive member of SCSW Raheema Panhwer said that the commission hopes to celebrate National Women’s Day with the same enthusiasm in future too.“

This was the second event of its kind and we will celebrate it next year too so that more women and girls from different walks of life are recognised for the contributions towards women’s rights.”