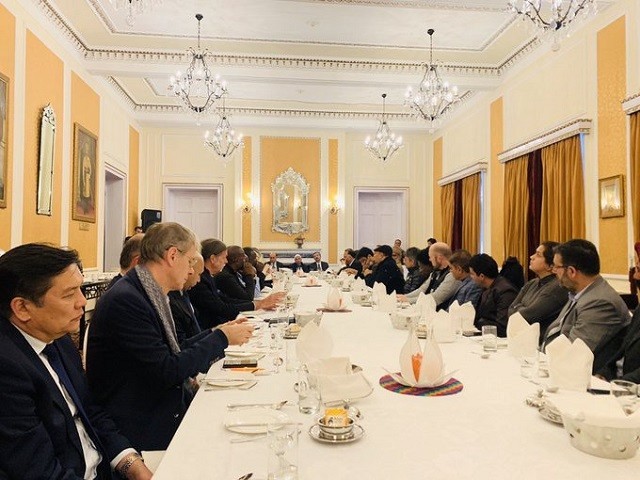 The group includes European diplomats, some of whom declined a previous invitation from New Delhi to visit the region. PHOTO COURTESY: TWITTER/@tahirqadiry

The group includes European diplomats, some of whom declined a previous invitation from New Delhi to visit the Himalayan valley. A proposed vote in the European Union parliament next month could chastise India for its actions in IOK.

On August 5 last year, India had stripped Occupied Kashmir of the special autonomy it had for seven decades through a rushed presidential order.

By repealing Article 370 of the constitution, people from the rest of India now have the right to acquire property in the disputed territory and settle there permanently.

India has since eased those restrictions, and restored limited internet connectivity last month, ending one of the world’s longest such shutdowns in a democracy.

But many political leaders, including three former chief ministers of Indian Occupied Jammu and Kashmir (IOJ&K), are still in detention without charge six months after the unlawful crackdown, and foreign journalists have so far been denied permission to visit the region.

Representatives from countries including Germany, Canada, France, New Zealand, Mexico, Italy, Afghanistan and Austria are on a two-day visit to “witness for themselves the progressive normalisation of the situation,” India’s foreign ministry said in a statement on Wednesday.

Representatives from several countries, including Germany’s ambassador Walter Lindner, were pictured on a traditional wooden shikara boat on Dal Lake in Srinagar.

“We are interacting with the traders, businesswomen and entrepreneurs in Srinagar about the status of business and tourism,” Afghanistan’s envoy Tahir Qadiry said in a tweet on Wednesday.

A Kashmiri woman paddling her boat through the Dal Lake, Srinagar. Like Venice, lots of shopping points selling local handicrafts & boat resorts in the middle of the lake. Undoubtedly the valley has a lot of potential for boosting tourism. pic.twitter.com/k5CkgKTKLq

Sources familiar with the itinerary said the trip will also include meetings with the Indian army and government officials, as well as journalists and civil society groups selected by the security services. Last month 15 foreign envoys visited European Union parliament – a trip participants characterised as tightly-choreographed with no room for independent meetings.

“Things looked calm, but we only had a very short time out the window of the car to assess the situation,” said a diplomat who attended the previous trip. “They told the truth, but not necessarily the whole truth,” he added of his meetings with delegates.